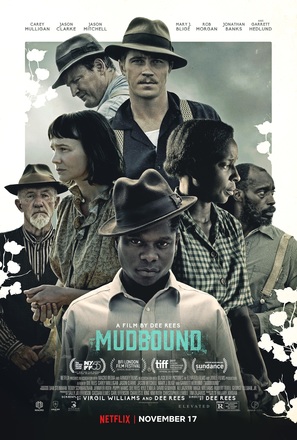 10 versions
Poster 1500*2222 px
While our present administration and legislative bodies have moved to the right, our country in balance has moved to the left.  At first only white property owners could vote; then all white males.  Slavery was abolished, unions were formed, women got the vote, the elderly got their Social Security and then Medicare.  LBJ pushed through major civil rights legislation with a strong Democratic majority in Congress.  But racism remains the elephant in the room, brought out by an election in 2015 that allowed alt-right and outright neo-nazism to foster their “blood and soil” ideology, while the south, once solidly Democratic, had moved into Republican arms in a protest against government-backed racial equality.  Even progressives today are satirized for their hypocrisy while allegedly accepting of African-American rights, depicted superbly in one of this year’s best movies “Get Out.” During the same movie year, Dee Rees’s “Mudbound” takes us back to the 1940s, a time that the Klan did its mischief and the whole society in Deep South states like Mississippi made their resentment against racial claims heard and acted upon.

Yet even during and immediately after the war, some friendship between blacks and whites took place in the Deep South.  It’s sad, though, that during the 40’s, when a black guy and a white guy are seen together in a vehicle, all hell could break loose in a dirt-poor community such as that depicted in “Mudbound,” giving the two Mississippi families in the Delta the look of the worst years of the Great Depression.

The novel by Hillary Jordan, which is sensitively adapted by the director and co-writer Virgil Williams, focuses on two families: the white family, burdened by fissures and a black family thinking, not without justification, that there can be no peace between the races.  The film opens in 1946 with characters waist-deep in the big muddy.  Henry Mc Allan (Jason Clarke) is burying his father, Pappy (Jonathan Banks), in a wooden coffin, but when he discovers that the grave he prepared has the skull of a slave, he wanted to quit digging, saying that Pappy would hate to be buried on what the old man would consider cursed ground.  The film flashes back to the war, where we discover that Henry owns some godforsaken acreage, employing a black family headed by a preacher, Hap Jackson (Rob Morgan).  Hap’s family tries to make a go of their lives, but know that a sharecropper has no chance to make a decent living.

During a time in Memphis, Henry has been courting and soon marries a more sophisticated Laura (Carey Mulligan) He may not have realized that Laura, at thirty-one, accept Henry’s proposal not because of love but because she fears being an old maid, shunned and pitied by the people around her.  When Henry’s younger, handsomer, and more charming brother Jamie (Garrett Hedlund) returns from the war, he and Laura are instantly captivated with each other, while Henry needs to look out lest the kid brother steal her away.  Laura is unaware at the time that Jamie drinks heavily and, were he here in modern times fighting in Afghanistan, he would be labeled a vet with post-traumatic stress disorder given his regular, terror-stricken memories of the fighting. (There are some war scenes, but the actual air battles are given minimal attention, as this is not a war movie but rather a nuanced look at the families.)  When Ronsel Jackson (Jason Mitchell) comes home a sergeant who has had close calls with death in Europe, he is disgusted that the whites in the town whose freedom he defended treat him without deference to the man’s combat in Germany.

There is little melodrama, which makes the mayhem near the closing of the tale that much more electrifying.  Jamie might be considered the anchor of the movie, given both his heroism and his flaws.  Our chief interest throughout is the friendship that slowly emerges between Jamie and Ronsel, in which the black sergeant, at first holding back, relaxes and jokes with Jamie, a white person—something he never expected to occur.  One might consider that the war which both fought, in segregated units, woke Jamie up to the absurdity of racism, despite his inheritance of his father’s blatant anti-black feelings that would commit the old man from violence.

Dee Rees is already an experienced hand at directing, having scored with her first movie, “Pariah,” in 2009.  Her compassion is evident then as well, with her focus on a Brooklyn teen with conflicting identities struggling for sexual expression.  Then, as in “Mudbound,” Rees plays the humanity of two of the characters against the humiliating inequalities of society, and does it as a slow burn exploding in a melodramatic conclusion.