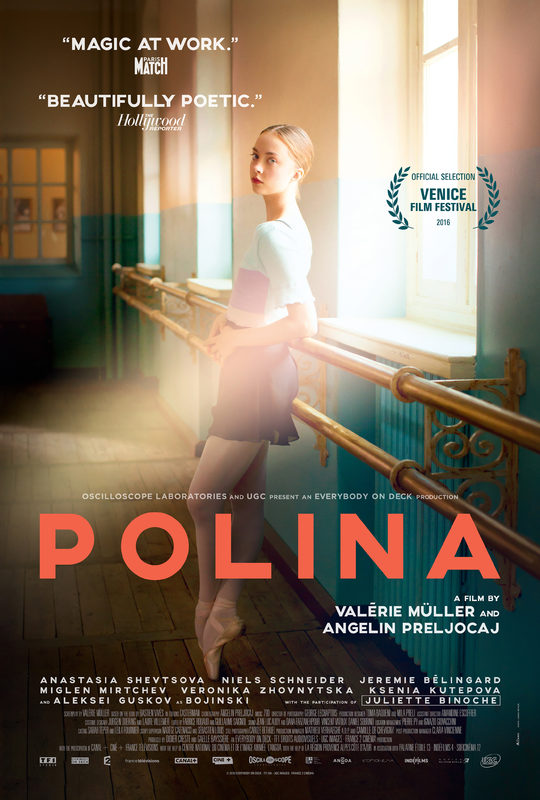 If you want to make it in the dance world, whether in classical ballet or modern, forty percent of the requirements is your chemistry with your partner. This may not be true, but you can pick it up from the comments thrown at the title character by her choreographers. Estimate that another twenty percent comes from pulling the broomstick from your butt, but those who cannot shake the sweeper out will never get past the high-school drama club play.

To find the ideal principal performer for the title role of “Polina,” which is directed by real-life choreographer Angelin Preljocaj and his partner Valérie Müller and adapted from Bastian Vivès’s graphic novel, the production team interviewed six hundred candidates in France and Russia before coming up with Anastasia Shevtsova.  The team found some who were perfect for the classical ballet segments, and some who could do modern improvisations.  They chose Shevtsova because she is comfortable with acting.  Anastasia Shevtsova, who carries the movie and, as an adult, appears in virtually every frame, has a mystical gaze, can move her body with the steps that would influence the Bolshoi Ballet to hire her, but most important for this film, she can do modern, she can improvise, and finally she can rise to the status of choreographer.  For her, this would fulfillment of her dreams, since she is one of the few dancers in the Bolshoi to have the courage to split from the highest status a Russian can have in dance, eager to break away from all convention and invent her own moves.  In the business world, we’d call that entrepreneurship.  In the dance world, that would be throwing away the tried and true in quest of the authentic you.  In the movie industry, call it art, rather that commerce; surprises rather than formula.  “Polina,” in fact, meets that standard of art, as a film that can enrapture even an audience that has never seen Ginger Rogers and Fred Astaire, nor marveled at the gyrations on TV’s “Dancing with the Stars” or “Bring It!”

Like Michael Powell and Emeric Pressburger’s 1948 movie “The Red Shoes,” in which a young ballet dancer is torn between her lover and her ambition to be a prima ballerina; and like Darren Aronofsky’s 2010 film “Black Swan,” projecting a dancer who is losing her sanity, “Polina” has a solid story to give genuine context to Polina’s quest for artistic freedom.  As an eight-year-old (Veronika Zhovnytska), she is tyrannized by the choreographer Bojinsky (Aleksey Guskov), whose demands for perfection would cause many a girl to drop out and fall back on twelve hours a day of texting.  Polina is stressed by family problems as well.  Her father, Sergio (Sergio Díaz) is engaged in illegal trade to pay for his daughter’s ballet studies, a man who in one scene has a gun pointed by a thug, forcing him to agree to the “Afghanistan route.”   That is never explained, nor do we know who trashes the family apartment.  No big deal.

Quitting the Bolshoi to the dismay of her father, she travels with her lover Adrien (Niels Schneider) to Aix en Provence in the south of France, where she studies modern dance with Liria Elsaj (Juliette Binoche—who worked for months on her own performance).  Liria reads the riot act to Polina after watching her dance with Adrien, stating “You are focused only on yourself; you must harmonize with your partner.”  After falling and spraining her ankle, she loses hope for a job, traveling to Antwerp in Belgium which is known for modern dance.  In one scene there, a choreographer asks the class to imitate any animal, at which point one male dancer takes off to electronic music in a frenzy that could make anyone want to chuck the strict rules of classical ballet and do your own thing.

In a final scene, which arrives without much preparation, she is totally fulfilled, performing an intricate modern dance with her partner, showing that she has learned well to focus on his feelings as well as her own.  So, the dance takes work, years of hard work if you want to be a professional.  There are mishaps along the way, family problems to work out.  As Polina, Anastasia Shevtsova shows the audience what has to be overcome; that not everyone can make it like her, and only few can chuck the classical rules of footwork, move into contemporary dance, and ultimately become a choreographer—the inventor herself.  Call “Polina” a feminist movie if you must, one certainly more authentic in showing the way a real human being can move to the top, and not a pop fantasy like Patti Jenkins’s “Wonder Woman,” which has been touted as feminist but is really just a surreal entertainment with few roots in humanity.  In French and Russian with clear English subtitles.