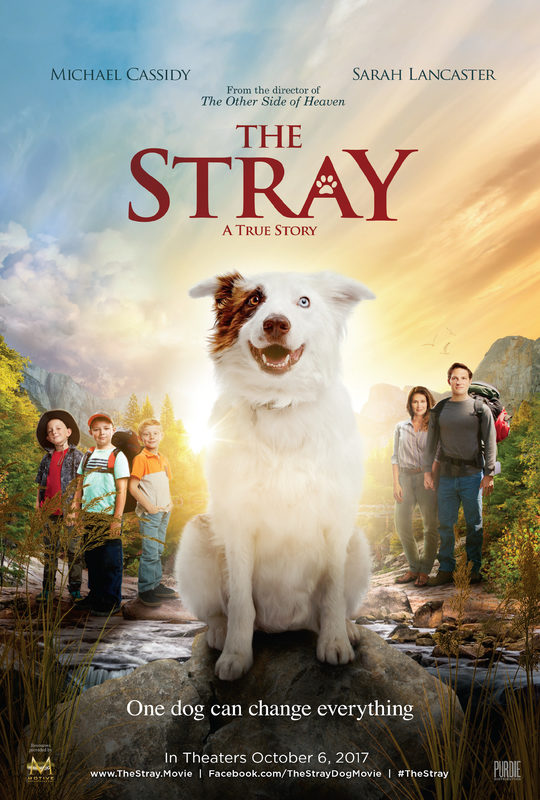 America is dog country.  Forty-four percent of our households have dogs: seventy-eight million canines find themselves as U.S. residents, making the four-legged pooches our best friends.  In fact if a suburban, or rural home, especially those with kids, were dog-free, that should make us suspicious.  It’s surprising, then, that the Davis family, settling into the near wilderness of Colorado, would be hesitant about acquiring one, considering the three kids would probably love nothing better.

Mitch Davis is best known by “The Other Side of Heaven,” about an Idaho Falls resident in the 1950’s who goes to the Tongan Islands for missionary work.  This time, his movie deals with the wariness of dog ownership faced by a character with his name, Mitch Davis (Michael Cassidy) and his wife Michelle (Sarah Lancaster).  They agree to give a dog a roof over its head but only if the dog, a stray, would come to them.  They have domestic problems, the kind that most of us wish they had.  Mitch is a movie studio executive in L.A. who is obliged to read so many screenplays that he hasn’t time to teach his oldest boy, nine-year-old Christian (Connor Corum), how to pitch a baseball.  He puts more hours into the job than a lawyer with a white-shoe law firm, but his wife Michelle, instead of being happy that her man can support five people, urges him to quit and to move the family out of the city and into rural Colorado where instead of dealing with other people’s screenplays, he can write his own.

Since young Christian has no friends and is annoyed to get so little attention from his dad, Mitch agrees to go camping with his son and two other nine-year-olds from his neighbor’s household. With the formerly stray dog Pluto’s (Shiloh) agreeing to the trip as well, they are off for a planned three-night venture, while Mitch motivates the trio to stuff their backpacks with the promise “You’ll be able to poop outside.”

Tragedy strikes when lightning hits the tent, with dire results for both Pluto and dad in a film whose ideal audience  is about the age of the three boys, would be too uncool for the junior-high crowd, but would be of considerable interest to adults who are tired of the soulless blockbusters and the movie vulgarities that are de rigueur nowadays.  Yet one might wonder about a story line that finds a dog and a dad struck by lightning, the young father depending on the three lads he’s hosting to bring back feelings in his legs and his arms.

Michael Cassidy and Sarah Lancaster perform as expected, on the surface the ideal 1950’s Leave It to Beaver types with the exception that Michelle is putting pressure on her husband which in her way is as demanding as the poor guy’s boss.  There is no vulgar language, the most serious exception being one’s kid’s expression “my butt,” and at ninety-two minutes “The Stray” does not overstay its welcome.  I wish, though, that the dog played by Shiloh would have a larger role, since his script calls for nothing more demanding than barking and running for the ball.  T.C. Christensen’s lensing makes Colorado look like Paradise.