WHAT HAPPENED TO MONDAY 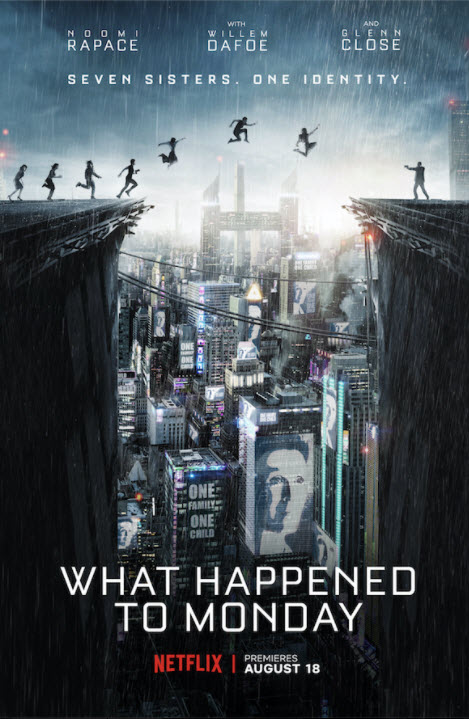 Thomas Malthus predicted a gloomy future for us all, warning that the food supply on our planet would become scarce, as population growth would outpace the ability of farms to keep up.  He was wrong, at least as concerns the developed countries, since technology has been able to yield geometrical quantities of crops.  GMO foods, widely criticized, have at least expanded what our farms could give us, but according to Tommy Wirkola, who directs “What Happened to Monday” with a script by Kerry Williamson and Max Botkin, Malthus’s creds have gone up.  In the near future, about a half century from now, famine lurks.  People are having too many children.  The solution brings to mind what the government of China had done but has now modified: the government forbids mothers from having more than one kid each.

This Malthusian thesis is given credible life but in this fantasy, Nicolette Cayman (Glenn Close), a fiercely ambitious bureaucrat, is in charge of enforcing new legislation, which would mean that no child would ever have a brother or sister to play with, to provide support, to counsel, even to fight.  Inevitably, though, some parents have twins, triplets, or even brothers and sisters of different ages. The trouble is that the government under this legislation could take away the superfluous little human beings, allegedly freezing them for a future time that the population would ease off, then be brought back to life.  But as we know especially from our recent U.S. election, things do not turn out as we had hoped.

In a brilliant performance, Noomi Rapace playing seven roles.  Through the wonder of cinema technology they talk to each other, fight with each other, and plan strategy.  The characters who are each named for a day of the week are under the guidance of their grandfather, played by Willem Dafoe.  The adult has forbidden the girls to go out into the street as a group of even as a pair.  The girl named Monday can leave the house on Mondays, and so on.  The children, who look vaguely alike—though one has blond hair—are warned that they must fool the authorities, even their own doorman who might turn them in—which reminds us of the Anne Frank saga.  Kids don’t always do what they’re told, but they all survive up to the time they are young women. They take care that each one has the proper hair style and color, and try to match personalities.

When the authorities enforcing the one-child-per-family are on to them, the chase begins.  Moments of physical violence appear now and then, though most of the action is verbal—the seven sisters, again played amazingly by one Noomi Rapace who was so magnificent in the “Dragoon Tattoo” series—keep one another abreast of the situation.  One incident played for comic effect finds one sister, a virgin, having to emulate another more experienced sibling when faced with a sexual situation by a man who loves one of her siblings but is credibly fooled one afternoon.

Even at slightly over two hours, “What Happened to Monday” does not outlast its welcome, as Norwegian director Tommy Wirkola, known for his 2014 movie “Dead Show: Red vs. Dead” featuring a man on the run from Nazi zombies, now functions on a deeper level with this impressive feature.  His new film has suspense, thought-provoking dialogue, a nice dose of physical violence, and especially the multiple personalities of Noomi Rapace.