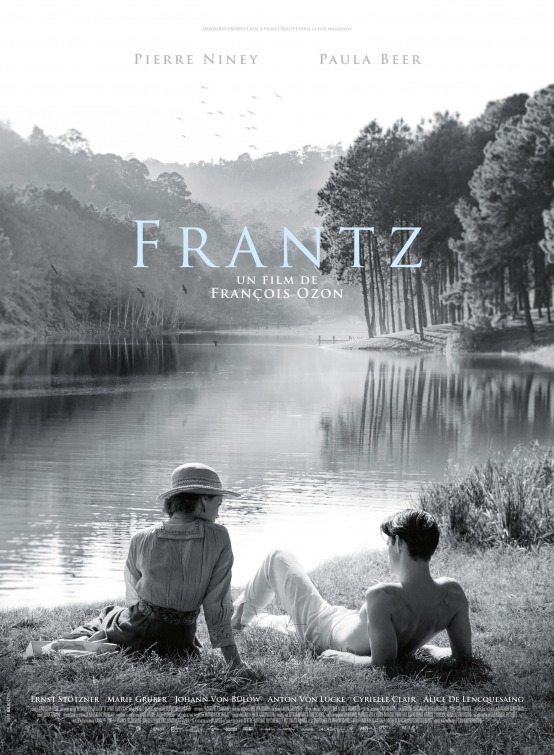 Not surprisingly, war does something to both the people who are unlucky to be at the front and to those at home who may receive the worst news about their loved ones.  Soldiers in Iraq and Afghanistan return bearing the diagnosis of post-traumatic stress disorder, or PTSD. Such is the case, perhaps, throughout history, though way back, they didn’t have a name for the emotional ills.  Some feel guilty about what they did in the war, others because their buddies were killed or seriously injured, still others return with serious disturbances based on their own experiences in a world that’s as foreign to their psyches in vistas far removed from their homes.  “Frantz” is about such a person, a fragile type as his mother called him, who returned from France at the end of The Great War in 1918 after being immersed in a world so different from his own as a member of a major French symphony orchestra.

Equally significant is the war’s effect on a German family, which had lost their only son in the trenches.  “Frantz,” though the title character, barely makes an indent in this story which was inspired by Ernst Lubitsch’s “Broken Lullaby,” in which the great Lionel Barrymore played a doctor who was the father of a hapless World War One victim.

Were he alive, Lubitsch would feel that Ozon’s treatment of the subject was at least emotional.  And no wonder.  The French director, best remembered here, perhaps, by “Under the Sand,” about the mental disintegration of a female professor when her husband goes missing at the beach, does an exquisite job with “Frantz.”  He is most fortunate to work with a terrific ensemble, particularly Paula Beer as young Anna and Pierre Niney as Adrien.  And he has the good luck to work with cinematographer Pascal Marti, whose lenses capture all the subtleties and reverses, with a final irony depicted in the last scene’s referencing Edouard Manet’s painting, “Le Suicidé.”

Photographed in several locations of Germany, especially Saxony, and also picturesque French towns like Ballancourt-sur-Essonne and Haute-Vienne, “Frantz” takes us to the unhappy home of Anna (Paula Beer) and her foster parents Doktor Hoffmeister (Ernst Stötzner) and Magda Hoffmeister (Marie Gruber), in mourning for the loss in the war of their only son Frantz (Anton von Lucke—who will show up in flashbacks).  When young Anna sees a Frenchman, no less, putting flowers on her fiancé’s grave, she is curious, and invites the young man into the Hoffmeister home.  Coupled with  mourning is the Doctor’s hatred of anything French.  He blames every Frenchman for the murder of their son and are not thrilled at the mysterious arrival of twenty-four-year-old Adrien (Pierre Niney).  Adrien has something to get off his chest. He comforts the threesome with stories of his friendship in Paris with Frantz where, he relates, they took in the sights, particularly the Louvre where their favorite painting is Manet’s “Le Suicidé.”.  It takes just a little time for the father to shrug off his hatred of everything French in embracing his son’s best friend, the two apparently separated during the war.

As we watch the growing affection between the shy Frenchman and the pretty German woman, we can’t help thinking that Adrien will take Frantz’s place as her lover and husband.  In fact the whole entente between the two serves as metaphor for the idea that hostilities leading to war are irrational and that an understanding and compromise could avert all such conflicts.  (Note the U.S. alliance today with Germany and Japan and the increasing commerce and friendship between our country and Vietnam!)

We could infer that Ozon and his co-writer Phillipe Piazzo are anti-war, perhaps even pacifists.  Recall that films showing the absurdities of war and the embrace of pacifism began in force with Erich Maria Remarque’s classic novel “All Quiet on the Western Front” which was made into the classic 1930 film by Lewis Milestone.  That theme continues right up to last year’s “Hacksaw Ridge” about a recruit’s refusal even to take a rifle in his hands.

The performances come across as utterly authentic, with Marie Gruber’s delightful role as a matronly woman who will do anything to make her son’s fiancé happy and especially Paula Beer in the principal role of a teary woman who tells a persistent but much older suitor (Johann von Bülow) that she does not want to forget Frantz.

The film is in German and French, the two principals happily fluent in both, and was nominated for the César Awards in eleven categories.  Wise judgment, indeed.