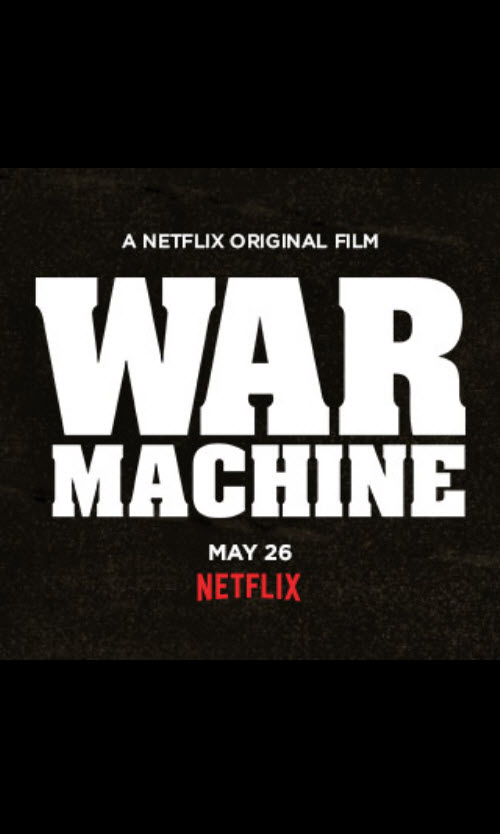 A comic whose identity eludes me once said that General Stanley McChrystal “sleeps standing up.”  This exaggeration is based on the man’s discipline: he sleeps only five hours a night, runs seven miles in the morning before the sun comes up, and eats only one meal a day.  He has been genuinely liked by the men who serve the U.S. in Afghanistan, and if you go along with the truth of “War Machine,” you’ll note that he never has to raise his voice.  He is deadly serious about the mission, but in the obviously campy way that writer-director David Michȏd casts him, he appears to take the war as a bad joke.

Michȏd, whose “The Rover” illustrates an unusual bond by a loner who sets out to retrieve his stolen car, deals this time with a man who is no loner, but who in fact is Obama’s appointee to leads the war in Afghanistan.  McChrystal, the obvious object of the writer-director’s bitter, yet comic take on the seemingly endless war and on the general, is portrayed by Brad Pitt in the fictional role of General Glen McMahon, who is seen several times running in the dark after his brief rest.  His role, as one critic states, could have been better played by John Goodman, but really—a morbidly obese actor as a hyperactive four-star general?

Pitt does OK in his campiest role, treating victory in the war as a can-do American goal, asking the President for an additional 40,000 troops though Obama is intent on whittling down the manpower, and lobbying France and Germany for contributing proportionally as stalwart American allies.  The men under his command accept what he has to say in his pep talks, but not so the Afghan resident goatherds of a godforsaken village, who don’t care about receiving blood money from the allies and simply want the invaders to leave.

Going over the top in making Afghan President Hamid Karzai of Afghanistan a buffoon, Ben Kingsley plays the fellow not as corrupt as he has been made out to be by the American media but as an inept, out-of-touch man who wants to be called “Hamid” and not “Mr. President,” a spot-on choice by Karzai considering his relative indifference to the war and his compulsion to watch TV while in bed with a cold rather than chat with the general.

The movie has too much intrusive music and too much narration by the journalist from Rolling Stone magazine whose highly critical article led President Obama to fire the general, though Obama himself becomes an object of satire for his lack of contact with McMahon.  As the Rolling Stone journalist notes, the general met with the president only once, appearing to equate Obama with Karzai for incompetence.

The overriding issue is that America’s war with Afghanistan, like its war in Vietnam, is foolhardy and humiliating, the greatest military power in the world unable to bring the Taliban to their knees after a dozen years or so.    There is some fighting toward the conclusion, an unnecessary gesture with serious overtones as one of the soldiers is responsible for killing a child.  (America gives the father compensation, of course.)

Brad Pitt fans will be delighted—or not—to see their favorite performer and movie-magazine icon as barely recognizable, with a straight military haircut, but I much prefer his role in my favorite movie of 2009 “Inglorious Basterds,” where Pitt, a commander in the war against Germany, hears a captive say he’d rather die than give in to his captors, only to have Pitt ask a subordinate, “The man wants to die for his country. Indulge him.”