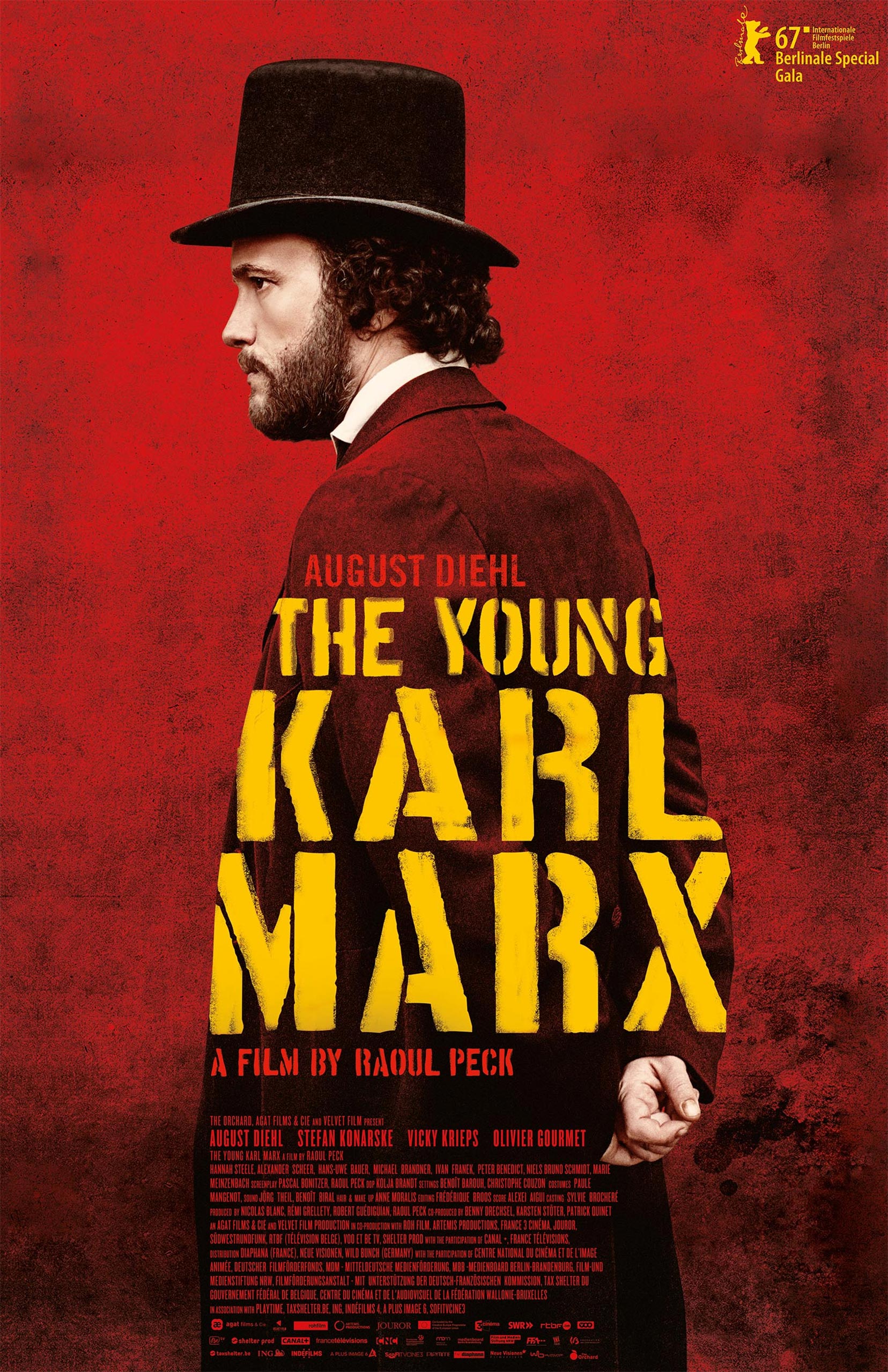 What four people influenced our present world more than any others?  The classic answer: Freud, Moses, Einstein, and Marx.  Why they have been chosen by some experts is beyond this look at “The Young Karl Marx,” and further, we must make clear that the governments of the former Soviet Union, of China before its leap into capitalism, and of North Korea today, are acting  by neither the letter nor the spirit of Karl Marx’s clarion call to the working class in his 1848 publication, “The Communist Manifesto.”  Raoul Peck, the Haitian-born director and co-writer of “The Young Karl Marx” may be best known for his “Lumumba,” a fiercely dramatic look at a former leader of the Congo, and “I am Not Your Negro,” based on the racial philosophies of author James Baldwin.  Given the tensions and action in his two previous works, it’s disappointing that his new film, though bookended by dramatic footage of beatings given to people by equestrian authorities and recent archival films punctuated by the force of Bob Dylan’s signature song, is worthwhile viewing merely for its didacticism and not for creative cinematography or great filmic tension.

Peck’s dream appears to be to raise Marx from his resting place in London’s Highgate Cemetery to full life by concentrating on the background of his ideas and by his alliance with Friedrich Engels, which should at least counter the humor of pundits who say that “Marx delivered his ideas, and Engels merely typed them up.”  One of the ironies in the story is that Engels, the son of a wealthy English mill owner, married a proletarian, while Marx, always needing money to feed his family and to continue his writings without a grumbling stomach, hitched up with a well-to-do haute bourgeois.  Backstories could have brought the two writers and speakers and so-called rabble-rousers to a more vivid life: one would wonder why Marx’s aristocratic wife was unable to bail out the family by simply calling upon her father to cough up the money.  We might assume that the plutocrat was not pleased by his daughter’s choice of a commoner and the son of a Jew (who converted to Lutheranism).

Structuring the film in the most classically staid manner—no animation, no manipulations of chronology, no sudden epiphanies or physical violence save for a punch that a prole landed on Engel’s nose—Peck pushes on, granting us insights into the miserable conditions of factory workers in the early 1800s through typical use of women clothed virtually in rags hammering away in the textile mills at near-starvation wages because in the case of the mill owned by Engel’s father, without profit he would be bankrupt and the workers would have nothing at all.

Much is made of the divisions within the era’s progressives, people who at least in their oratory are more feverish for radical change than today’s American liberals.  Proudhon (Olivier Gourmet) speaks to the masses about what we consider a desire for anarchism—which means that the workers would own and control their workplace destiny, but would not join Marx and Engels at a meeting of the so-called League for Justice.  Karl Marx needed Engel’s help not only in formulating a manifesto for the masses but perhaps even more needed his money.  Apparently Engel’s dad did not cut the young man off despite what could be called the latter’s notions of a “self-hating bourgeois.”

Karl Marx is played by a bearded, almost unrecognizable August Diehl, whom we have seen in more recognizable form in “Inglourious Basterds (which I consider the best movie of 2009).  Before he met his charming ,aristocratic wife Jenny von Westphalen (Vicky Krieps), he worked with a radical publisher, knocking out articles raging about the social conditions present in Prussia—until the staff are arrested and the paper shut down.  Despite his lack of money, he is able to movie to Paris with wife and infant daughter, then to Brussels and London.  In Manchester he meets Friedrich Engels (Stefan Konarske), son of the rich mill owner, who like Patty Hearst (sort of) rebels against his father’s mistreatment of scores of women in the mill.

Everything in the film leads up to the grand design of “The Communist Manifesto,” a far, far shorter work than Marx’s 3-volume “Capital,” written to evoke the passions of the “workers of all countries,” and in a dramatic meeting of the League of the Just, a congress of idealists, he and Engels transform the majority into the Communist League, dramatically tearing down the poster with a bright, red one with the new title of the party.

Marx and Engels smoke cigars, perhaps before such a habit became associated with full-bodied plurocrats, and what’s more Marx is no saint.  He has several extramarital affairs, not brought out in this film which at about two hours has enough details to handle.  Once again, didactic this picture is.  Anyone desiring to see the human beings behind the intellectual leaders of communism, will profit.  But the picture could use some of the excitement and directorial creativity of Raoul Peck’s previous two films.