THE DEATH OF STALIN 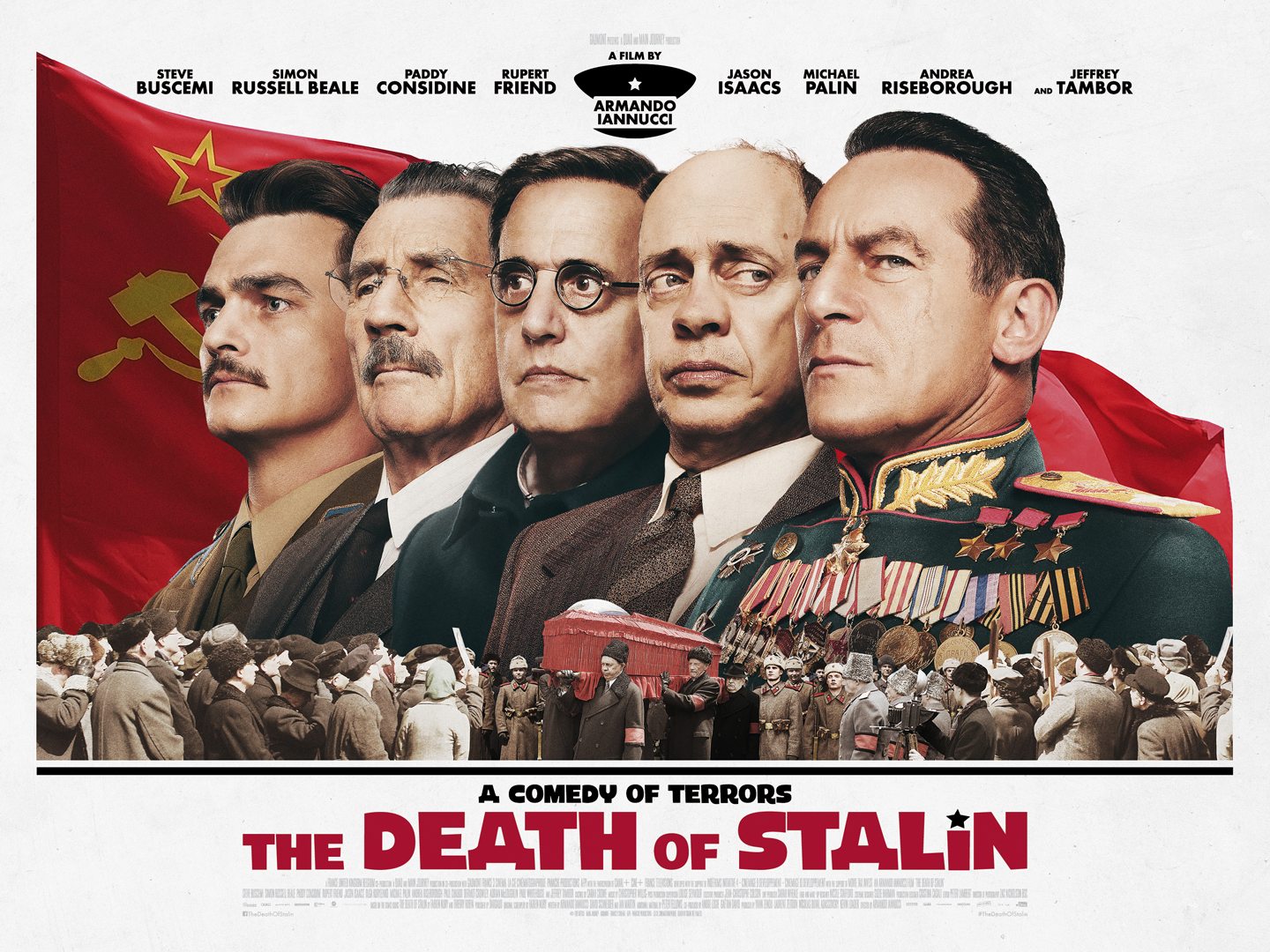 It’s commonly agreed even by those who hated Josef Stalin that the Russians owe him a great debt, that without policies under his leadership that turned the Soviet Union from an agricultural state to a mighty industrial nation in just a couple of decades, the USSR would have been defeated by Hitler.  Some say, in fact, that Stalin was crazy during a good part of his reign but virtually electroshocked into sanity during the war.  When Khrushchev denounced Stalin, thereby ending the man’s glory, even changing the name of Stalingrad in 1961 to Volgograd, you might have assumed that the man who ruled the Soviet Union from 1953-1964 was showing his disgust for Stalin’s purges, the show trials that led hundreds of thousands to the gulag or to the firing squad.  After seeing Iannucci’s “The Death of Stalin,” you might get the idea that disowning previous administrations is the way things were done to consolidate power, something never seen in recent U.S. elections.

Armando Iannucci, whom you may know from his TV series “Veep” which takes satiric aim against the U.S. government and “The Thick of It,” in which American and British operatives try to prevent a war between the two countries, now takes on a government system ripe for satire.  “The Death of Stalin” spends most of its 106-minutes’ screen time dealing with the struggles for power immediately after the death of Stalin, who, at least in this movie, dies of a cerebral hemorrhage after reading a missive denouncing him as a tyrant.  As one of the few people who really look like their real-life counterparts, Adrian Mcloughlin looks the part with a thick, brown mustache and a grin that replicates pictures that used to hang on the residential halls of patriotic Soviet citizens.  As Stalin lay on the floor hovering near death, high-level officials gather, each ambitious to wield power after their leader succumbs, debating which doctor to call.  Slowly.  “They’re all either in the gulag or dead,” explains one, and by the time they decide on a retired doc, Stalin is dead.

The film starts with promise.  During a symphonic concert performed with Maria Yudina (Olga Kurylenko) at the keyboard, the engineers get a call: Stalin wants a recording of the music.  Since no record had been made, Comrade Andreyev (Paddy Considine) in the engineer’s booth, orders the doors locked as the audience shuffle out and demands that the concert be replayed from the beginning.  This time the recording will be made.

After that, the picture falls apart, with the potential successors to the Kremlin’s equivalent of the Oval Office argue, debating who is the most qualified to fill Stalin’s shoes.  The problem is that none of the dialogue is the least bit amusing, and what’s more the bickering becomes repetitious particularly given its lack of bon mots.

Steve Buscemi comes across with the loudest mouth in the role of Nikita Khrushchev, Leventiy Beria (Simon Russell Beale) turns in a role of the head of the NKVD (secret police) with the most bear-like figure, and Georgy Malenkov (Jeffrey Tambor) stands in as the fashion-conscious, would-be successor who asks strange questions and delivers a range of stories in a white suit.  The party leaders meet to take votes which seem to require unanimous consent.  Afterward we receive visits from army commander Georgy Zhukov (Jason Isaacs) weighed down by some twenty medals and ribbons, and Stalin’s son Vasily (Rupert Friend) who throws his weight around with a flurry of tantrums.  Unfunny.

When Khrushchev emerges as new leader, the movie is bookended with another concert, finding the man in the audience while his own successor, Leonid Brezhnev (Gerald Lepkowski) sits behind him probably plotting a move that will put him over the top.

The best that can be said is the music: the concert that opens the show and even the majestic orchestral tones that underscore (finally) the long list of credits.  Two days before the picture’s release in Russia, the Ministry of Culture banned the film.  Lucky Russians.