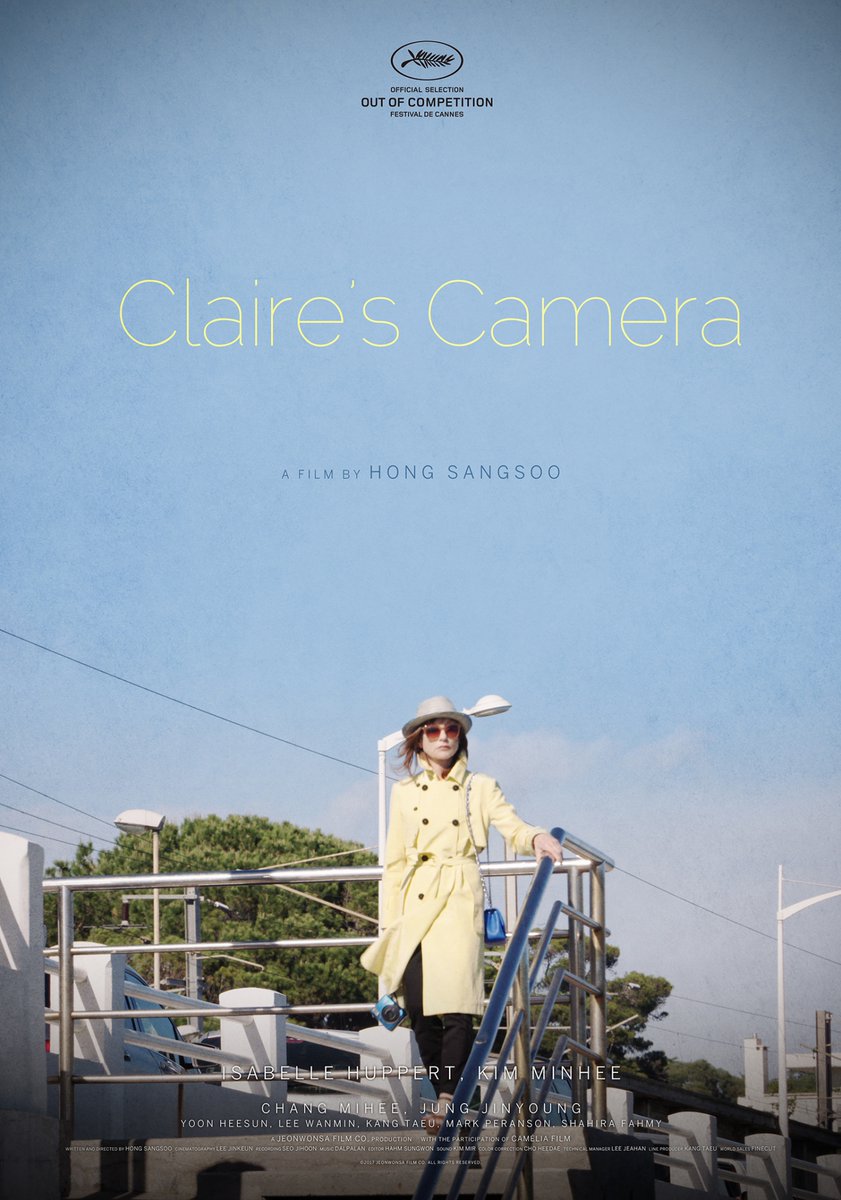 You cannot think of French actors without citing the names Catherine Deneuve and Isabelle Huppert.  Huppert is as ubiquitous in French films as Gerard Depardieu once was, this time appearing in a feather-light comedy about a tourist from Paris who is, or pretends to be, a fish out of water.  As the title Claire, she runs into some others from a vastly different culture—three Koreans who are in Cannes, at least one on official business while the others are, well, you have to see how they get together and how their meetings  transforms them.  “If I take a photograph of you, you are not the same person anymore,” offers Claire.  That’s not all: if you look into Claire’s eyes, you get the same magical transformation. In these particular cases, Claire’s snapping of her Polaroid camera leads to changes in people quite a bit for the better, while at the same time writer-director Hong Sang-soo may have a subliminal message that attending the movies, particularly any of Hong’s twenty-six entries, will make you a better person.

Hong Sang-soo, whose recent film “On the Beach at Night Alone” finds an actress wandering around a seaside town thinking about her relationship with a married man, is not too different from his thematic concerns in “Claire’s Camera,” This is a multi-lingual project that clocks in at sixty-nine mostly magical minutes, the whole episode graced with performances by Ms. Huppert in the title role and Kim Min-hee, who worked with the director in three of his films, in the role of youthful Manhee.

If major purpose of traveling is to broaden yourself by introductions into different cultures, “Claire’s Camera” not only confirms this but finds a delightful intersection of the cultures of Korea and France, the visitors to Cannes using English when conversing with one another.  In an opening scene as cryptic as it is heartbreaking, Manhee’s boss Nam Yanghye (Chang Mihee) asks her loyal employee for the past five years to have coffee with her.  This is not a friendly meeting but a firing, with Nam’s frustrating her employee of five years and making the movie audience apoplectic. Nam tells Manhee that they must part ways because the employee is dishonest.  She does not back up her contention, but says simply that honesty is something you’re born with and cannot be acquired.  Huh?

In another scene, Claire, dressed like a tourist with a rakish hat, chats up film director So Wansoo (Jung Jinyoung), allowing that she is on vacation from her job as high-school teacher and hobby of poetry.  What she really hopes to do is to bewitch those whose pictures she takes like a good Samaritan, making people honest and sending them off better folks than they were before.  Soon the ensemble are to get together and we find the real reason that Manhee was fired.

French filmmakers know how to create dialogue and good talk is what you get whenever you watch fine Gallic cinema.  The discussions involving the four principals, while perhaps seeming innocuous to anyone doubling as a fly on the wall, is richly textured, delightfully humorous, and wholly satisfying.