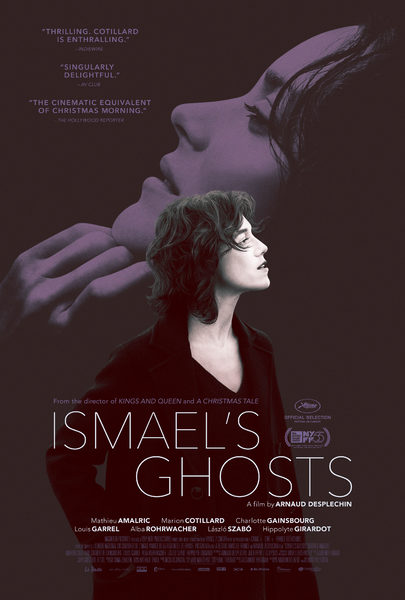 You’re in luck if you take in the director’s cut of “Ismaël’s Ghosts” because the writer-director will keep you and others of your sophistication engrossed for most of its 135 minutes.  Call is episodic, name it a magnum opus, label it anything you want, but if you want to find the meaning of life, you’ll gain a few steps toward answering the most basic of all questions by seeing many of life’s aspects unfold.  This is because Desplechin, in his ninth fiction feature, paints a broad canvas tapping your funny bone, evoking some tears, wondering whether he has packed so much material in this that it comes across as a summation of maybe every type of situation you may find yourself in.  This director’s cut is not the 120 minutes’ version that played in Cannes, but akin to the cut that was shown here in New York at the annual film festival at Lincoln Center.

This is not to say that among life’s experiences many in the audience will  ever see a ghost, though truth to tell Carlotta Bloom (Marion Cotillard), missing from France for 20 years, had long been certified dead.  Because of that long absence, which Ms Cotillard discusses in the film’s juiciest monologue, her great love and partner Ismaël Vuillard (Mathieu Amalric) is free to look elsewhere for female companionship.  Meanwhile the titular character’s mentor Henri Bloom (László Szabó), a filmmaker who has taught his protégé everything he knows, now depends on Ismaël to relieve his loneliness and his slide into depression.

The film is chaotic.  Stories within stories, genres within genres, countries appearing and changing like a global kaleidoscope from France to the Czech Republic and even Tajikistan open up as though Ismaël is taking a survey of writing and direction from the 83-year-old Henri.  He is busy on a script, throwing in some melodrama about his brother Ivan, a diplomat hired by the French ministry because of his non-traditional education.  At the same he is enjoying his affair with the lovely Sylvia (Charlotte Gainsbourg), but begins losing his sanity when Carlotta returns (or does she?), thereby setting up a romantic triangle which, instead of pleasing Ismaël, who considered himself too old for romantic nonsense, goes off the wall.  In a similar action, his father-in-law Henri, taking a flight to Tel Aviv to receive an award, goes ballistic on the plane when told by the flight crew that he may not open a bottle of his own spirits.

It might be difficult to find a trio more capable of these bold dynamics as Mathieu Amalric, Marion Cotillard and Charlotte Gainsbourgh.  Amalric in particular has been a favorite of Desplechin—well known among cinephiles here for such contributions as
the popular “A Christmas Tale” about a woman whose need for a bone marrow transplant brings a feuding family together, and “My Sex Life…or How I Got Into an Argument,” focusing on a young man with a dual conflict of whether to change girlfriends of whether he really wants to become a professor.  The struggle of this fellow in “My Sex Life” seems ridiculously easy to solve when compared to those of the men and women in this latest feature, bringing together a potpourri of people who can afford to have all the anxieties of modern civilization.a Their woes do not amount to a hill of beans when compared to the problems of Syrian refugees—who presumably have other things to worry about than which men and women to embrace and which to reject.