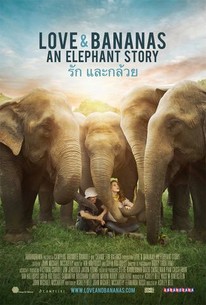 Ninety-nine percent of us use animal products for food.  While it’s not necessary to do so, we can offer at least a limp excuse.  We have to live and despite what vegans will tell us, we don’t think we can get adequate nutrition or taste satisfaction strictly from plants.   But to use animals for entertainment?  I don’t mean dog shows or dog agility trials but rather the way some train animals for the circus, or slaughter them for ivory, or beat them the way some undercover Chinese videos illustrate how dogs are clubbed to death.  (Go to PETA.com and watch these horrific films.)   By contrast “Love & Bananas” depicts people doing their saintly best to provide shelter and love for abused elephants, especially the doc’s big star Noi Na. Noi Na was part of a herd treated miserably, even sadistically, in Thailand.  The elephant is partially blind thanks to an idiot “trainer” who gouged out an eye with a bull hook. As the film’s human star, Lek Chailert, informs us in her delightful English, the trouble is largely the lack of education.  Many people to this day still do not believe that animals have emotions or language capability despite the overwhelming evidence to the contrary.

If “Love & Bananas” has one theme that stands out from the others, it’s that love is better than pain and that elephants, like dogs and cats, seek the affection of others of their ilk and also from the human beings with whom they come into contact.  Lek Chailert, founder of the Save Elephant Foundation, holds court through this adorable nature film.  The fifty-seven year old woman, who was born in the village of Baan Lao two hours north of Chiang Mai Thailand, had a great upbringing from her grandfather, a traditional healer who would sometimes be shown an injured animal for him to help.  The animal rights activist, who today can be found at Elephant Nature Park in touristic Chiang Mai, Thailand, hosts actor-filmmaker Ashley Bell, known to many of us for a lead performance as Nell Sweetzer in Daniel Stamm’s “The Last Exorcism,” falls in love with elephants, but her heart belongs to Noi Na, the lead four-legged performer.

The two women set out on a life-threatening mission to rescue Noi Na, who had been used for trekking, or from what I gather means taking tourists for rides in Thailand.  Other elephants are used for logging, which is the loading of logs onto trucks, while others are trained to perform for circus acts requiring Thai workers to “break” the noble creatures as though they are stallions.  These elephants are put into Pajans, or crush boxes, and for 24 hours are beaten, in some cases with these sharp bull hooks, sometimes cutting away parts of their ears, leaving them bloodied and covered with horrendous scars that serve as a history lesson of torment.  These unfortunate creatures may actually be envious of elephants who are slaughtered for their ivory.

While filmmaker Ashley Bell, using her script co-written by John Michael McCarthy and Fernanda Rossi, wisely focuses on one elephant to bring the picture down to a human, er animal level.  For forty-eight hours, Bell and Lek traveled 480 miles through Thailand after Noi Na’s owner agreed to free the elephant.  Arriving at the sanctuary, Noi Na is at first anxious as the trekking elephant spent the last seventy years in captivity.  After a short while, the herd at the park accepts Noi Na, who shows joy by tail-wagging and flipping sand from her trunk across her back.

Many owners of abusive trekking camps have agreed to take jobs as caretakers in the animal sanctuary, which provides them with even better pay and maybe even clues them in that what they had been doing for years is immoral.  We in the audience are advised to shun circuses and animal shows in general (happily Ringling Bros. got the message and closed down its circus) and to donate to the sanctuary.  For further information, go to LoveAndBananas.com.