SICARIO: DAY OF THE SOLDADO 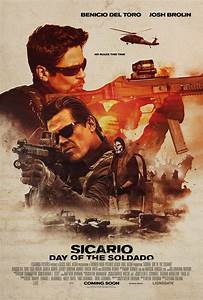 This sequel to the Denis Villeneuve’s 2015 “Sicario” is loaded with ambiguity that may confuse some theatergoers while the picture is running, but everything clears up toward about halfway through.  When a film does not label one person “good guy” and the other one “bad guy,” it’s being unrealistic.  Human beings are not all good or all bad.  Therefore Stefano Sollima’s new film respects the audience, moviegoers who want their characters to be nuanced and not artificially set up to be one extreme or the other.

It’s tempting to say that “Sicario: Day of the Soldado” is ripped from today’s headlines given all the attention paid to the plight of migrants who enter the U.S. illegally and who are being punished through separation from their children and by a President who now says that these people, looking to escape gang warfare as well as to better their economic condition, should be sent back and to hell with due process.  What Taylor Sheridan, who wrote the screenplay, is saying with this movie does not relate directly to current-day politics but instead sets up a fictional situation in which the drug cartels in Mexico have are now smuggling people across the Texas-Mexico border.  According to the CIA, they are doing this because there is more money in human smuggling than in drug trafficking!

Let’s clear up some confusion right away—without giving away spoilers.  We need only to look at each of the principals to discover their motivations.

Matt Graver (Josh Brolin) is under orders from James Riley (Matthew Modine), the U.S. Secretary of Defense, to drum up a drug war between two major cartels in Mexico, one of which is under the leadership of Carlos Reyes (who does not appear in this movie).  The idea is to have the two factions kill each other off, a neat, albeit extra-legal method of operation for the U.S.  (Whether this procedure has ever been followed in real life is anybody’s guess.)

Alejando Gillick (Benicio Del Toro) is an attorney whose family was killed by the Reyes cartel.  He’s out for revenge.

Isabel Reyes (Isabela Moner) is a teen daughter of the drug kingpin, Carlos Reyes, kidnapped by Alejando as part of the plot to fire up the anticipated drug war.

Cynthia Foards (Catherine Keener) is the CIA bigwig who wants nothing more than to wipe out all remnants of the cartels not excluding members who are currently helping our government.

And that’s all you need to know of the principals.

Opening scenes are full of tensions promoted by Hildur Guðnadóttir’s soundtrack which comes off just dandy in the beginning but soon becomes a monotonous, mournful, repetitious, squealing long after it has made its point.

In a scene photographed with considerable craft by cinematographer Dariusz Wolski in the Mexican desert, a man blows himself up, killing enforcers on patrol.  Later sets of explosions in a large department store in Kansas City have been detonated by a terrorist who presumably was able to make it to the U.S. by way of Mexico and with the help of the cartels. Matt Graver questions a Somali militia man (Sakariya Ali), threatening to call in a drone strike against his brother if he does not talk.  But not all traffickers operate in Mexico.  We are introduced to Miguel (Elijah Rodriguez) who assists the smugglers of human beings as a warmup to becoming a full-fledged soldier in the Mexican cartels.

Alejandro, whose family was killed by a cartel (remember this from the first film) kidnaps Isabela in a powerful scene that finds her transported, head covered by a hood, through an upscale Mexico City location, but later pretends that he is helping her to escape—in the movie’s cleverest scene.

There is significant plotting, a few twists and turns, some cute touches such as a scene in which Alejando, looking for assistance from a poor resident in the desert, uses sign language.  The movie is shot in Albuquerque with the most dramatic scene on the posh Avenida Santa Fé in Mexico City.

Italian director Stefano Sollima is in his métier, known largely for his “Gomorrah,” involving a power struggle within the Mafia to become the next leader of a crime syndicate.  Writer Taylor Sheridan’s “Hell or High Water” involves a scheme of a family to save their West Texas ranch.

“Sicario,” which means “assassin” and “Soldado” = “soldier,” is full of explosions, machine-gun fire, wild car chases, and yet it is in no way a mere facsimile of juvenile vid games.  Loaded with surprises, well acted and nicely photographed both in the desert and in urban locations, Sollima’s movie will attract both those who like scenes of destructions and folks who like enough intrigue and surprises to get them thinking.  The film is held together by a vivid performance from Benicio Del Toro with an able assist from Josh Brolin.