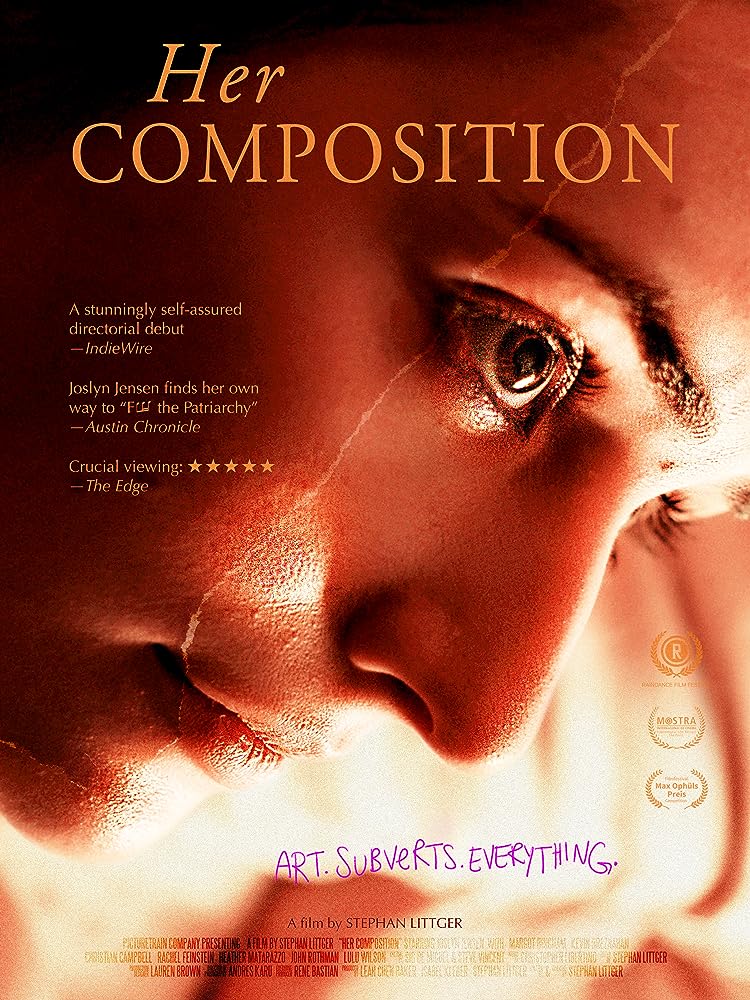 Artists are different from you and me. They see and hear things more creatively than the masses of people. Because of this, while they may have more joy from what they’re doing than accountants and burned-out physicians, most find it difficult to pay the bills. What artists crave above all, maybe even more than money, is inspiration, without which they will feel unfulfilled and ultimately driven into the cruel world of routine jobs.

Do you know people like that? If not, you will meet one such person, maybe even an icon in her ability to demonstrate the frustrations that come from a failure of inspiration. Maybe they will blame others, as this young woman did, and maybe they realize that fifty percent of the problem is not from society but from their own paucity of imagination. This young women, Malorie Gilman (Joslyn Jensen), is having difficulties, both financial and artistic. As a student in one of New York’s most prestigious conservatories, Malorie is told by the dean that the scholarship she needs to continue her studies has been awarded instead to a man. She blames the patriarchy at first before realizing that while women are still not treated right in our republic, moaning about injustices will neither pay the landlord nor give her satisfaction. So her Brooklyn apartment is going up $200 a month. So her dull accountant boyfriend Arthur (Ryan Metcalf), is dropping her. So she’s about to be discarded by the conservatory. Happily, help comes along that will solve her problems, both financially and artistically. We should all be so lucky.

Her friend Gila (Margot Bingham) works for a women’s rights organization, attracting the attentions of Kim (Okwui Okpokwasili), who is willing to turn over a list of her clients for possible FBI prosecution. Kim wants the info to be delivered to Gila, a list of clients with each one’s fetishes, though she praises her favorite guy as “romantic.” Instead Malorie keeps the documents and, bypassing escort agencies, contacts a few of the men herself. Somehow, though these fellows all dug a black escort, they are all fine with a skinny white woman who is on the shy side and at first does not really know what to do in bed to warrant payments of $1500 to $4500 a night. She makes heaps of money, but mirabile dictu, she uses her sexual experiences to write a thesis project for the school, one which she hopes would allow her to proceed with her doctoral studies.

In fact she mixes her bed times with sounds of the city—African drummers in Washington Square park, the vroom of the subway, people’s chit-chat. Now she is not only a composer: she is a painter who, after rolling white paint on her walls uses her new creativity in the service of an unusual cartography. She knocks out a map of New York on the wall with arrows pointing to the men she has been servicing. I don’t know if you find this concept appealing. In fact you may be more interested in the sex scenes, a few of which could qualify as soft porn in the style of “Fifty Shades of Gray.” The most sensual scenes are with the romantic, a hip bearded fellow who, given the sculptures in his apartment could mark him as a world traveler. The scariest is with a guy in a New York Sheraton Hotel who makes sure to double lock the door and who in one scene does something to cause Malorie to fight him off.

This movie is the feature of Stephan Littger, who also wrote and edits the film and whose previous work, “Toxic Oranges:* a Wall Street Fairy Tale” is about a homeless seller of oranges on Wall Street who gains success by inventing a credit system. This marks him as a man with the imagination to create movies with fairy tale implications, the trippiness of “Her Composition” serving as a sharply edited bit of cinema with stunning sound effects, segments of musical compositions, and a story that makes the most of sounds—city scenes and sexual unions—that are transformed by one creative person into surprisingly absorbing music.

As for Malorie, Joslyn Jensen is in virtually every frame captured by Andres Karu’s lenses, sometimes in extreme close-up, sometimes with her hair in a bun (not attractive) and other times free flowing (yes!). Her emergence from a timid, frustrated near-failure to an assertive woman thanks to her sexual experiences (which only an artist would be able to translate into painting and music) is oddly credible. And the film is a love letter to New York; its subways, its diversity, its schools, and the creativity it offers to those who can profit artistically.