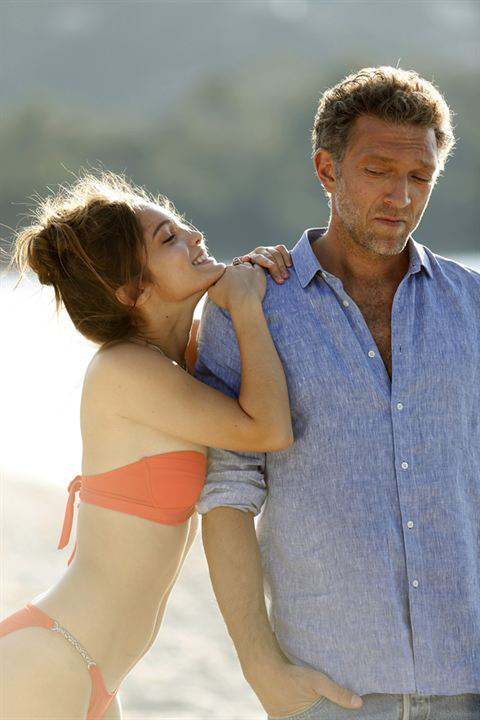 When you see a guy about 45 years old in a New York’s expensive Per Se restaurant seated opposite a woman about half his age, how do you react?  Chances are you’ll guess that she is an executive assistant playing up to her boss, wouldn’t you?  Or do you think that the gentleman instigated the liaison and is, perhaps, exploiting the assistant such as we’ve all heard in the #MeToo complaints?  Jean-François Richet, who directs “One Wild Moment,” could have taken the latter stand, a satiric look at an older man taking advantage of the cute young thing, but instead, Richet, who makes a complete about-face since his previous work.  Richet’s “Mesrine”  stands today as one of the great cops and robbers thriller ever, yet voilá: Richet is equally adept with romantic comedy as shown in his “Un moment d’égarement,” which depicts an underage girl who may love to dance with guys about her own age but who seeks a mature man who is all of forty-five years old.

Louna (Lola Le Lann), the seductive young woman about sixteen years of age has her eye on Laurent (Vincent Cassel) who is well over twice the girl’s age and who is drawn into a sexual connection with Louna, one which he tries to avoid, but as they say, “A stiff penis has no conscience.”  If you are a frequent moviegoer you’ll recall the plot from the 1984 American movie, Stanley Donen’s “Blame It on Rio” starring Michael Caine and Joseph Bologna, which in turn is copied from Claude Berri’s classic 1977 work, also called “One Wild Moment.”  And why not copy, have sequels, give it your best shot when you have such a great premise; one which does not find the older guy preying on a young innocent but instead puts the blame not on Rio this time but on the young woman?

When Maureen Daly wrote “Seventeenth Summer” in 1970 about a romance between one Jack and one Angie, she did not have this idea in mind.  Her couple, in puppy love, are about the same age.  The age difference here makes all the difference, propelling “One Wild Moment” into a hilarious comedy of two middle-aged best friends, Laurent and Antoine (François Cluzet) who take their vacation in an old house near the beach in Corsica—which, as portrayed here, looks as close to paradise as you can get.  And the movie is blessed with one of France’s great actors, nay one of the world’s best and most versatile performers, Vincent Cassel in the principal male role.  Cassel’s character Laurent has a platonic interest in Louna, which is fine, except that his mild feelings toward her are beefed up.  Though Laurent’s own daughter, Marie (Alice Isaaz) becomes increasingly suspicious that her dad is a “pervert,” Laurent’s best friend Antoine is clueless.  When Antoine hears that a much older man may have deflowered his precious teen, he storms about, shouting that he will kill the guy just as he shot a wild boar (and killed a neighbor’s dog by mistake).  The film gets much of its humor from dramatic irony; the idea originating in Greek tragedy when the audience knows more than the characters.

The actual seduction is explicit featuring full frontal and back nudity for Louna (the actress who plays her is 22 so that’s OK) and, as usual, no such exposure in the male.  It’s a clear night, the water is pleasantly warm, the seduction is easy, or at least it looks easy despite Laurent’s belief that he could stop it at any time.

Some viewers whose commentaries and reviews appear in the ‘net say that they felt uneasy by the reverse Lolita effects, but the age of consent in France is fifteen, so the only problem is that Laurent could not possibly feel safe, dreading the moment that his friend will know the truth. For her part, Louna, whose home life is troubled because his father is about to separate from his wife, appears to get some joy in watching her mature man unease, his feelings of guilt.

So, don’t be troubled.  There’s nothing perverse here, at least in French law.  As Professor Henry Higgins states in Lerner and Loewe’s musical “My Fair Lady,” “The French don’t care what they do; as long as they pronounce it properly.”  Louna doesn’t care in the slightest, enjoying her satisfaction in losing her virginity to Laurent.  In fact, the entire story, so well photographed in gorgeous Corsica, is a dream of a comedy.