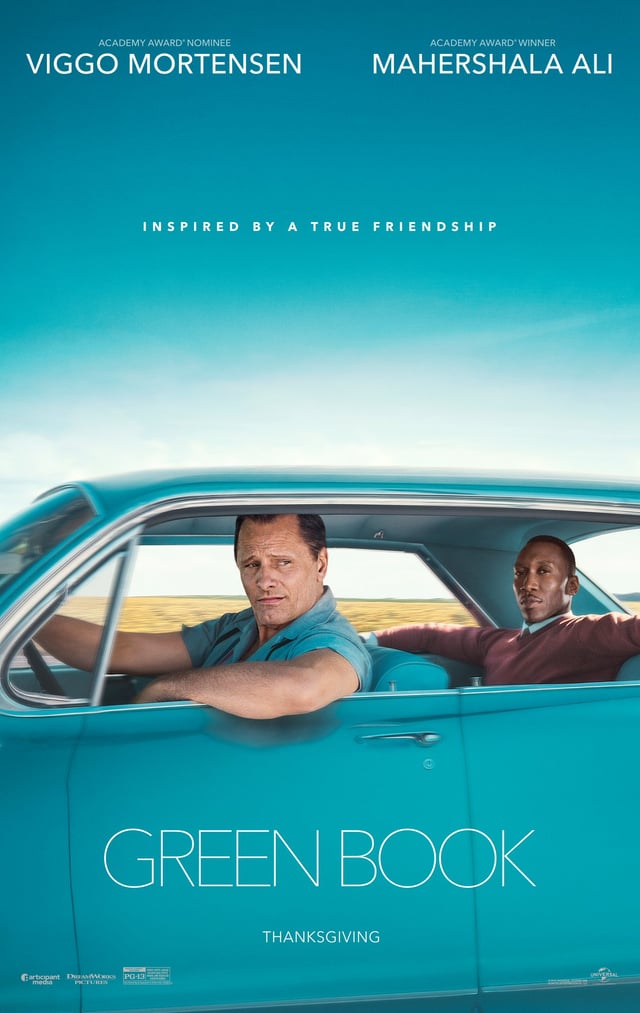 What can you expect of a director whose repertory includes three versions of “Dumb and Dumber,” one of which received 10% favorable reviews on Rotten Tomatoes? Quite a lot, it turns out, because “Green Book” is graced with a terrific script and actors whose comic timing also allows them to deal credibly with serious themes. The title comes from an actual book with the title “The Negro Motorist Green Book,” which gave African-Americans an extended list to aid them when they are driving while black in the Deep South. “Green Book” is a perfect movie for young people as well, for those whose knowledge of Jim Crow actions are nothing more than something they may have run into during civics lessons in high school. It would be nice, wouldn’t it, to think that with the abolition of Jim Crow, that people in America are no longer discriminated against because of the color of their skin, the houses of worship that they attend, and their status depending on their country of origin.

“Green Book” is a rollicking comedy whose laughs bounce off the two principal characters. For his part Dr. Don Shirley (Mahershala Ali) is a highly intelligent and well-educated Black man, able to play classical piano, jazz and pop with equal and amazing facility. He has a couple of doctoral degrees, studied at a conservatory in Leningrad where he learned Russian, and pictures himself as a man of noble birth. He lives on the second floor in a spacious apartment in Carnegie Hall, his elegant room decorated with elephant tusks and other valuable trophies. He even sits on a throne wearing African clothing and is served by Amit (Iqbal Theba), a South Asian who sounds like the guys you get when call for computer fixes.

When Shirley, who had participated in world-wide tours on the piano with two accompanists, contracts to play in the South of 1962, he needed a driver and someone to run interference. He finds the ideal candidate in Tony Lip Vallelonga (Viggo Mortensen), a Bronx-dwelling night club bouncer at the Copacabana, who had the job experience he needs. In reacting as a bouncer by punching out some tough guys at the club, Tony forces the Copa to shut down for two months of renovations. Needing a job, Tony is hired by Shirley, and during their “Driving Miss Daisy”-like experiences, their cultures conflict, as though to prepare us in the audience for an appropriately sentimental conclusion to the story. Each adapts some elements of the other’s way of life. Tony, a vulgar, lower-middle class guy, receives lessons in writing and speaking during the trip, while Shirley, who asserts that he is not accepted by either Whites or Blacks, learning to eat Kentucky Fried Chicken and to realize that what he misses most is a family life, the kind that Tony takes for granted in the mean streets of the Bronx.

A delightful, even exhilarating road-and-buddy movie which finds Tony and Don heading across the broad expanses of the U.S. While South of the Mason-Dixon line, two adventures stand out to give us insight into the ways of the South. While welcomed by management in one location, he is told firmly that if he needs the bathroom, he cannot use the one at the club. He has to go outside a few feet from the club. In another, he is refused a table in a hall where rich whites are dining and asked to go back to his motel for dinner. The bouncer and the pianist have different ways of handling such inconveniences, and though the situation is serious, their discussions evoke a good deal of comedy along with the heart-rending realities.

The film is bookmarked by the lively activity in Tony’s home. Before the trip he must get permission to take two months away from his wife, Dolores Vallelonga (Linda Cardellini). At its conclusion on Christmas Eve, Tony rejoins the family, insists that nobody call his boss an “eggplant,” and has grown greatly through close contact for two months with a Black man.

Ali looks as though he is really playing the piano, an enviable skill that allows him to simulate works by Chopin as well as improvised jazz. In one terrific scene that will remind you of the two parties in “Titanic”—one that features upper-crust Whites who have obviously paid well for elegant surroundings and another, downstairs, where the less endowed folks are showing the aristocratic Rose Dewitt Bukater, that the poor can have more fun than the rich.

Viggo Mortensen is virtually assured of an Academy Award nomination.