When a mother names her newborn baby Florian Henckel von Donnersmarck, that kid better do something in his life that justifies the fancy moniker. In this particular fellow’s case he more than meets his family’s expectations. In his Oscar-winning “The Lives of Others,” von Donnersmarck looks at a Stasi official in the 1984’s East Berlin who surveiles a writer and his lover, becoming absorbed in their goings-on, a stunning look at the repressive forces in East Germany. Germans who saw the film were said to be amazed at the authenticity of their lives back then, including the idea that the government was suppressing the elevated number of suicides plaguing the state. And that was just von Donnersmarck’s debut! Now he has done it again, with a film which, to date, should be considered not only for awards in the best foreign language category but, what the heck, the best movie of the year. Period. So far. “Never Look Away,” whose German title “Werk ohne Autor” (Work Without Author) is too bland considering the subject matter, has a better English title, one which is based upon one character’s telling her young nephew to look at life in all aspects with enough curiosity to make informed decisions. 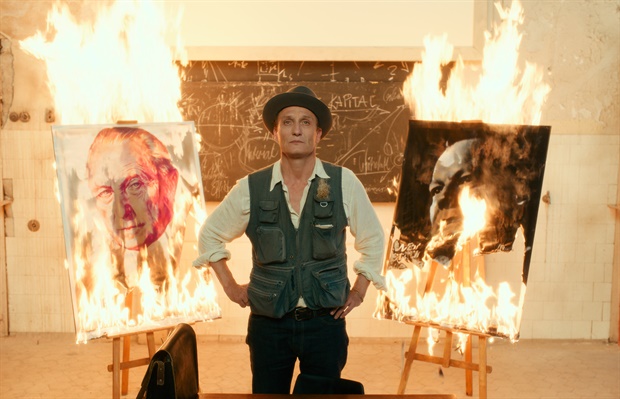 If the three and one-quarter hours of running time makes you hesitate to check this film out, ignore indecision. This film is so riveting, so absorbing a story about art and love and politics and finding your identity, that I dare you to look away even once. That’s how brilliant this modern masterpiece is.

Though based loosely on the life of Gerhard Richter, a popular German painter who in this fictional form takes on the name of Dresden citizen Kurt Barnert, “Never Look Away” is an epic work encompassing some almost decades of German civilization from 1937 through the early 1960s. If you did spend a week play hooky from your history class for a week or so, you’ll know that that Central European nation had undergone years of tragedy, as extremist ideas take a role first as a country under National Socialism, then, after the war, shifting gears wholly as the Eastern sector is dominated by pro-Soviet governments. Specifically, von Donnersmarck, using his own script, gifts us by portraying an artist who at first is pressured to conform to Nazi ideology in painting canvasses that eschew so-called degenerate art, later pushed by communists to knock out works of socialist realism (the “boy loves tractor” idea crafted to uplift the people by glorifying workers and farmers).

Nor does it hurt that the writer-director enjoys the talents of Sebastian Koch, Germany’s greatest contemporary actor, here playing an evil s.o.b. that will condemn one young woman to be asphyxiated with carbon monoxide and another, during a different political climate, to have an abortion which may cause her to be unable to produce the children she so resolutely desires.

Prepared to be nailed to your theater seat right from the beginning as in 1937, the Nazi government invites people to visit the Degenerate Art exhibition, the guide (Lars Eidinger) delivering a snarky but captivating lecture to a tour group about the alleged evils of what we today would call contemporary or avant-garde painting. Young Kurt Barnert (Cai Cohrs) will never forget the experience as his favorite Aunt Elizabeth (Saskia Rosendahl) introduces him to a museum that will likely be avoided by people his age who might prefer to play soccer with his pals. Elizabeth, a beautiful young woman with flowing blond hair, may well be the kind of Auntie Mame type we all wanted, a woman who is anything but conventional and whose idea of educating a young boy includes appearing before him in full, frontal, naked beauty. Older relatives catch her the raw, and turn to gynecologist Professor Carl Seeband (Sebastian Koch) to send her away to an institution which must decide whether to eliminate her (returning soldiers need more beds) or simply sterilize the poor woman.

When little Kurt, now a young man (Tom Schilling) is admitted to an art academy, he finds that the new Communist regime in East Germany allows socialist realism as the only acceptable art form, warning him that the country does not need more Picassos. The best is to come when Kurt flirts with and eventually marries fashion student Ellie Seeband (Paul Beer), not realizing that her father is the notorious professor who sent his beloved aunt away. The hateful professor continues to spew venom, arguing that Kurt is not good enough for his daughter in part because he considers the handsome young man unemployable. Kurt’s favorable future is virtually assured, however,when he is taught at the Kunstakademie Dusseldorf by Antonius Van Werten (Oliver Masucci), a man who covers his deformed head by a hat and who relives his rescue by Tartars when his plane was shot down over Crimea. Now without restrictions—he and Elizabeth had fled to the West—Kurt survives the humiliation of scrubbing hospital floors to pay for his schooling and to go on to find his true identity in his art.

The great changes that befall Germany during a thirty-year period are dealt with flawlessly. You might think the Communists and the Nazis have much in common, at least as their viewpoint on art coincide. It’s almost predictable that a movie with art as a subject would conjure the idea that a great artist must have suffered trauma or be emotionally disturbed. “At Eternity’s Gate,” Julian Schnabel’s new picture about the last days of Vincent Van Gogh, is the latest entry into the subject, though when considering off-center neurotics and psychotics like the professor and Aunt Elisabeth, Kurt is the model of stability and maturity.

The movie soars cinematically under Caleb Duschanel’s lensing. Outdoor scene are of brilliant sunlight of the kind that fought to keep Vincent Van Gogh from going completely bonkers. The historical background is illuminating without being reductive, the passages from Nazism to Communism to democracy seamless and pristine. The mostly large paintings, notably the ones we see when Kurt’s coming into his own, look as though they might be in a museum rather than mediated by the screen in a film that’s in German with English subtitles and photographed in Berlin, Dresden, Dusseldorf, North Rhine-Westphalia, Saxony and the Czech Republic.