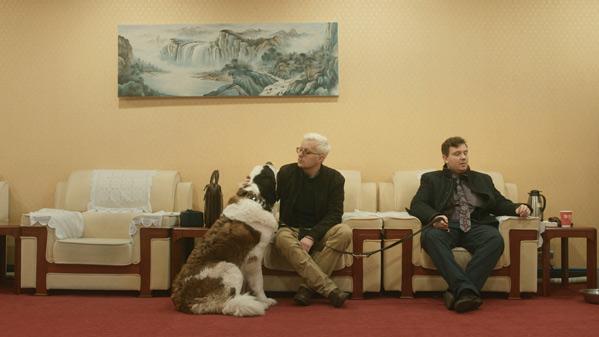 You’ve probably heard of American business tycoons who have gone to China to take advantage of cheaper labor but who have returned to the U.S. frustrated by the different cultural aspects of Chinese business as well as the difficulty of managing an operation from thousands of miles away. Mads Brügger, in directing “The Saint Bernard Syndicate,” knows what cultural dissonance is all about. This time he focuses on the difficulties of negotiating with people from a foreign culture. This is his first fiction film, having previous contributed documentaries “The Ambassador, wherein he goes to uncover the blood diamond trade in Africa, and served as co-writer of “The Great European Cigarette Mystery,” dealing with a European politician involved in being in the pocket of the tobacco companies.

With “The Saint Bernard Syndicate,” he serves up his celluloid with a lighter touch, though the absurdist comedy at times comes across as zany to the point of embarrassment. As with his tobacco doc, he takes pot shots at business again, but this time zeroes in on a couple of dorks who consider themselves entrepreneurs and who seem destined to suffer the fate of many another enterprising person with no aptitude for business despite a plan that looks like a slam dunk.

Brügger chose his actors well. As Frederik (Frederik Cilius Jørgensen and Rasmus (Rasmus Bruun) are known in their native Denmark for comedy, they are ideal in situations that apparently call for some major improvisation. At the same time he takes his chances with some Chinese subjects who are non-professional actor. “The Saint Bernard Syndicate” is unlike any American sitcom as it’s not the kind of story that requires an audience laugh every twenty seconds. It embraces a serious overlay in that Rasmus has just been diagnosed with ALS, or Lou Gehrig’s disease, so with imminent paralysis and death looming, he figures, what the hell, might as well go with his chum Frederick despite having been bulled by him in an elite private school.

This is the kind of story that may make you think more than once about investing with start-up companies involving foreign countries. As written by Lærke Sanderhoff, the two go to Chongqing, a major business center in China and so polluted you’d not expect many tourists to visit. They set up embarrassing interviews for a staff of bilingual secretaries. After failing with an expensive party complete with confetti, bands and dancers, they manage to bait a wealthy investor, not realizing that he is a scammer with possible ties to organized crime. He is the only Chinese investor that allegedly believes that the rich countrymen will buy Saint Bernard dogs to add to their prestige, and therefore is willing to risk a large sum to set up a center that will breed the dogs, allow buyers to buy food from that center, and go with the veterinary care that it would provide.

Odessa the dog improvises as the big, lovable St. Bernard, while Rasmus Bruun was named best actor at the recent Tribeca Film Festival. Now and then Frederik Cilius Jørgensen playing CEO of the Saint Bernard Syndicate insists on pulling rank on his buddy, but both are klutzes—something like Danish Laurels and Hardys. Since every dog has its day, we are pulling for the two businessmen because deep down many of us realize that whatever talent we have, it’s not for business. “The Saint Bernard Syndicate” is a Monty-Pythonesque tale of missed connections, as embarrassing as it’s funny, and with a serious streak involving the horror of taking a final, big chance when your weeks are numbered.

In Danish, Mandarin and English with English subtitles.