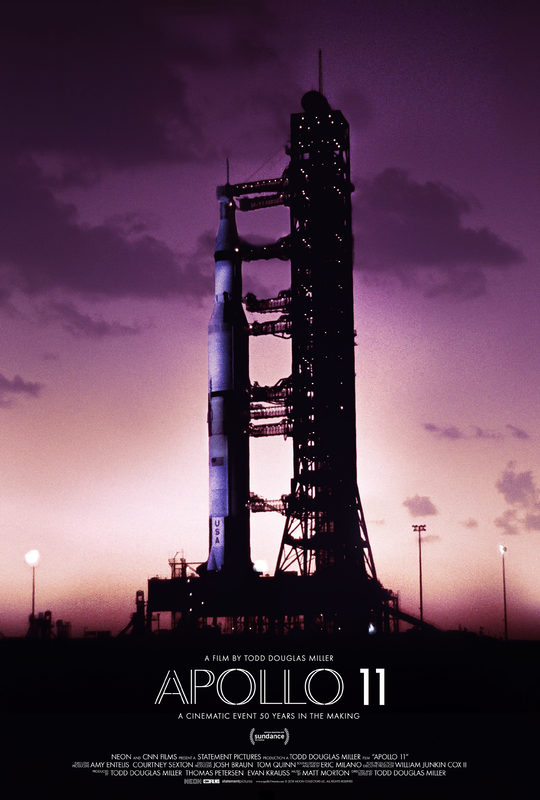 If Frank Sinatra were an astronaut on the Apollo 11 mission, he would make these lyrics popular:

Why did we have to wait fifty years to watch scenes never before released to the world? The big plus in Todd Douglas Miller’s heavily researched and competently edited documentary is that after a half century, there are archival clips that we’re seeing for the first time giving viewers a more comprehensive, even a rah rah, look at a buddy road movie to make others of the sub-genre seem so provincial. After all we’re talking about sending three men on a mission more risky, more likely to crash and burn, than would face a guy and his gal fortified with a liter of Dewar’s, setting out without head gear on a hundred-miles-an-hour jaunt through the California coast.

America’s trip to the moon in 1969, which might seem to today’s millennials as a time hopelessly backward in technology, is a key moment in history when the American people and, in fact, the five hundred million people worldwide who tuned in to the drama, feel a togetherness never sent since in quite the same way. Still, outside of the minutes in which the space ship is prepared for takeoff with just minutes to go before ignition—and ultimately the blastoff that illuminates the heavens—there is not much here to lead Americans in the chant USA! USA! USA! Most of the film conveys technical details, showing how many scores, perhaps hundreds of engineers sit at their desks, short-sleeve white shirts and ties setting of their closely cropped hair, each fulfilling one specific function needed to make the trip a rousing success.

Thankfully there are no talking heads here, no people sitting in chairs across from the subjects filling their heads with questions that everyone knows are coming and which garner predictable enough replies. Instead, Walter Cronkite, the journalist most trusted by Americans, conveys the excitement of the people who have napped on Florida beaches waiting for perhaps the most dramatic single moment in U.S. history.

The backstories of the three buddies, tossed in while Commander Neil Armstrong, Michael Collins and Buzz Aldrin are suiting up, display wedding pictures, kids, other tidbits to show that the three are not robots but vulnerable human beings with families, some members of whom may or may not have encouraged their heroes to take part in a mission. Remember that any hitch in the engineering would mean that their children would never see their fathers again.

Scenes taken right from the space ship are of the highest value, particularly the moments that the ship is about to land on the crater-filled surface of the moon and setting down in such a hitch-free style that they trio appear to be gliding to earth on a slow-moving helicopter. President Nixon’s message to the astronauts conveys the Oval office occupant’s bursting pride, and much earlier, President Kennedy delivers a speech in 1962 introducing the project that would reach fruition in July of 1969. The entire film serves to punctuate the banality of our politics today, our country irreparably divided into political viewpoints so far apart that compromise no longer appears possible; the unity that existed at least for a short time, on that propitious July day.