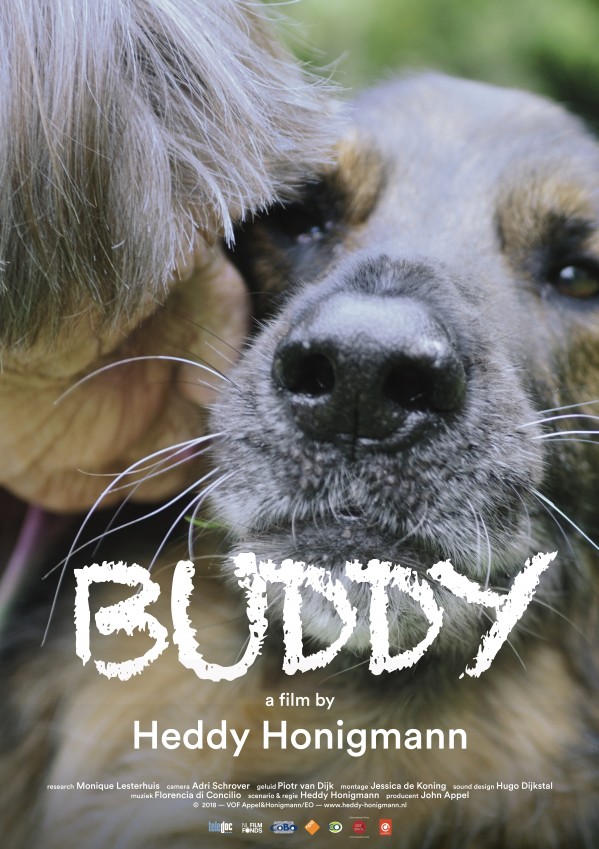 Chaser, a Border Collie, can locate 1,022 items surrounding him on the floor at the request of his trainer. Border collies are often considered the most intelligent of dog breeds, and Chaser proves that he can supply entertainment to the folks who view his antics on the ‘net. But that’s all fun. What can dogs do to help us, the people, the folks who lack the intelligence that dogs have and prove it daily by enabling Trump? The enablers in Congress who sit, stay, and mostly play dead at the president’s command? Actually there are many things that dogs do for us according to Heddy Honigmann who wrote and directs a documentary starring Mister, Kaiko, Utah, Missy, Kay, and Makker.

Peruvian-born Dutch writer-Director Heddy Honigmann is a major player in the Netherlands with an impressive array of documentaries including “Forever” – highlighting the Père-Lachaise cemetery in Paris. By contrast her “Buddy”—surprisingly without a dog named Buddy—is all about life. She follows six disabled people whose lives have been made so much better by their bond with our best friends. While these service dogs have learned to do things you wouldn’t not expect of your own pets, what comes across is principally the great love that the human folks have of their four-legged friends who obviously do not consider the canines to be robots following our commands.

Jessica de Koning edits the tale of six pairs, shifting from one couple to move on to another, then returning several times to complete the task. The people with disabilities are one African-Dutch man with post-traumatic stress disorder who relies on Mister to keep him on the right side of functioning human being. Makker, a ten-year-old dog, adds vision to an 86-year-old woman who had been blinded from the age thirteen from a German bomb. Makker is so trustworthy that his owner is able to put her cane aside and jog with him on open grounds. Kaiko works for a human who has a neurological problem not specified in the movie, and is able to move around the kitchen opening drawers including the refrigerator to haul out nutrition—without cutting in to take what he wants for himself. Kay pulls around a young woman who has limited vision in one eye and who uses a wheelchair, being pulled along everywhere as though Kay were a Husky racing in Alaska. A ten-year-old who has epilepsy and autism has the desire to wake up each day with an enduring love for his Utah. They sleep in the same bed and obviously adore each other, though I felt some discomfort watching the kid as he kissed the dog a few too many times.

The sixty-seven-year-old writer-director mostly allows the subjects to speak for themselves, adding interviews in her gentle style—which obviously works best for both the people and their dogs. Since this is a documentary and not a narrative, it lacks some of the excitement you’d find in the best dog movies like “Lassie Come Home,” “Shiloh,” “Hachi” and “Molly and Me.” Some of the chit-chat between people and dogs is likely improvised, thereby taking away from the enthusiasm that viewers have been led to expect in dramatic tales. As it stands, “Buddy” does not overstay its welcome, but don’t expect to be thrilled by plot points and the sentiment you’d expect from any drama about a vulnerable 8-year-old and the dog that got lost.

The dogs understand Dutch. For the rest of us there are English subtitles.