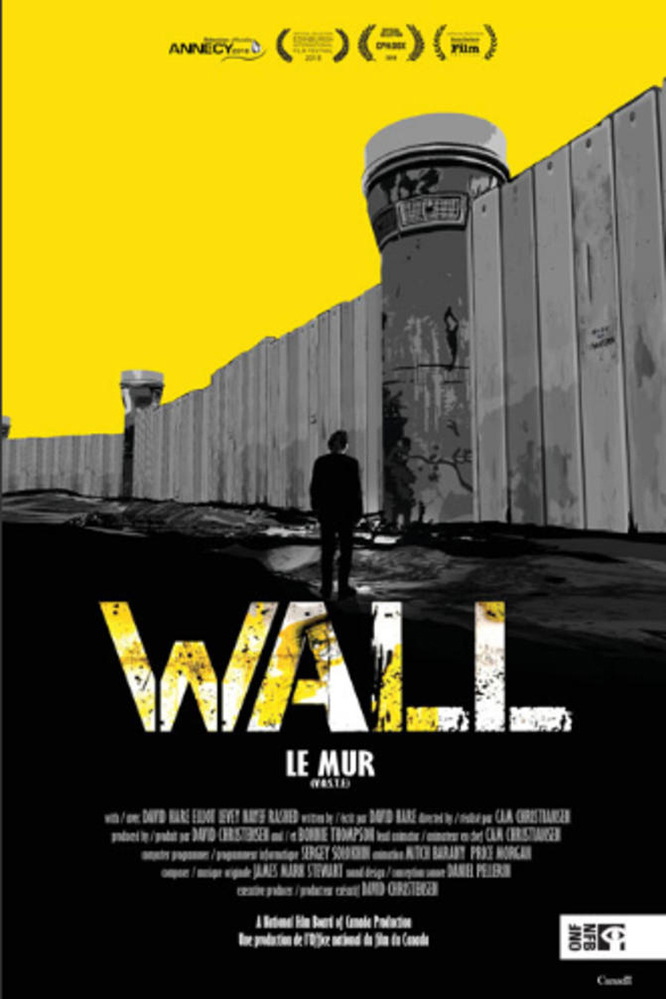 If you wonder why the animation, which informs the whole of this feature, is black-and-white, you might wait until the concluding minutes to get an answer. The final moments of the picture are among the most vivid that you’re likely to see this year. As for the rest of the unusual documentary, it’s a mind-blower of sophisticated animation, of the interface or light and shadows, and what’s more, the narration by British playwright David Hare is both lengthy and fascinating.

Hare takes sides.  If if you like the Israeli point of view you’d think he’s just another fan of the Palestinians. After a suicide bomber hit a Tel Aviv discotheque in 2001 killing many of the youths having a the kind of good time that would be frowned upon by the religious on both sides, Israel built a wall that is four times the size of the one in Berlin, twice as high in points, and successful. Eighty percent of the terrorist attacks on Israel—or of freedom fighters if you’re on the Arab side—have been stopped based on statistics from the pre-wall era. Four billion dollars was spent on its construction by a small country with only seven million Jewish inhabitants, a point that our own president may use to garner support for the wall on the border with Mexico. But unlike the American version, many Palestinian landowners were uprooted as the wall was built partly on land that was part of the Palestinian West Bank.

Why the wall? As noted, this was an attempt to prevent land incursions by Palestinians in the West Bank, but the whole project may be for naught, as the Arab side may not be able to cross over with weapons but can now rely on flights of drones and rockets to cause the same damage without inflicting deaths on themselves. In fact the most fascinating point absorbed by the animated character of screenwriter David Hare in his interviews and road trips is that while we on the outside consider Israel to be strong (it has, after all, the most powerful army in the Middle East), Israelis themselves consider their country to be fragile and weak, and have not settled in the way most of the rest of the world has done in thinking that they have a secure, permanent place to live. Planning ahead to 2030 is out of the question.

Much of the information passed on by the movie is well known by those of us who follow politics. The Arabs are regularly harassed, sometimes having to take heavily trafficked roads and may be stopped for hours at checkpoints. Why does Israel do this? “Because they can,” states one Davuid Grossman who lives in Israel. Most of us know by now that a half million Jews live in the West Bank in settlements, making any peace ever so much more difficult. Aesthetically, the wall is an eyesore in the countryside, and given the frenzied energy of building in Jerusalem, that capital city (at least capital as recognized by the U.S. and Paraguay) has lost its religious ambiance.

If you are among the political junkies following Israeli politics through the Times of Israel, or the Jerusalem Post, or Haaretz, or for that matter any major New York media, you are likely to put aside the boredom you think you’ll feel before you watch the film. The MoCap animation technology (“Black Panther,” “Avengers,” “Guardians of the Galaxy) will capture your imagination and make the road trip engrossing.