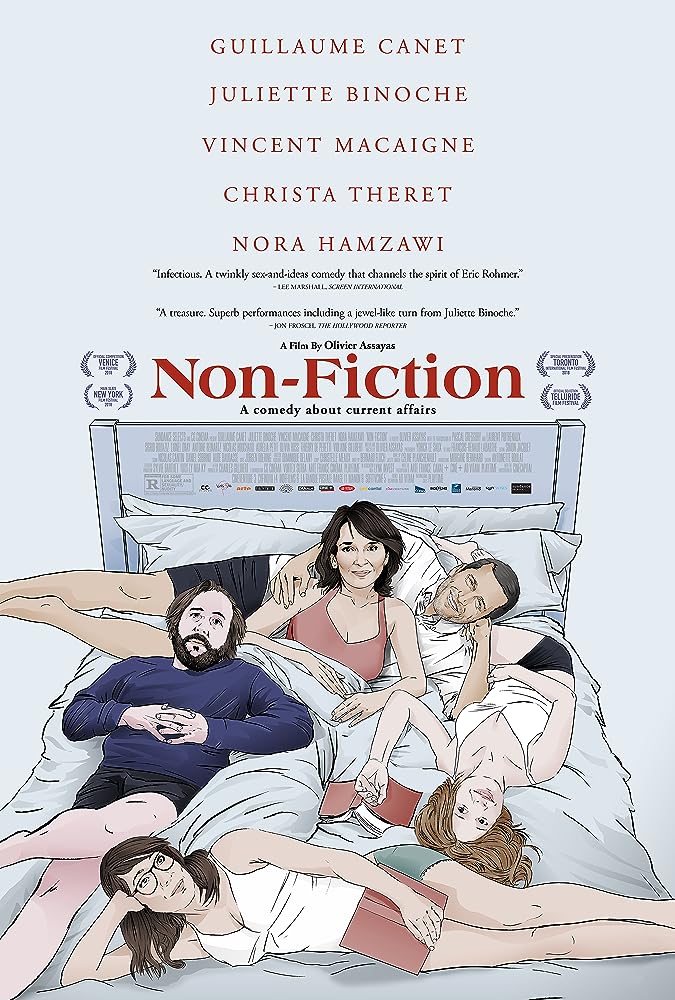 In Lerner and Loewe’s musical “My Fair Lady,” Professor Henry Higgins, acting as a speech therapist, notes, “The French don’t care what they do actually, so long as they pronounce it properly.” This seems apropos to Olivier Assayas’ “Non-Fiction,” whose original title is “Doubles Vies” since it deals with people who have double lives. The talk is literary. One can call this movie not so much plot- centered or character-centered as dialogue-centered given the heaviness of what these people have to say. As for the second part of the quotes, yes, these French don’t care what they do, given their attitude toward secret affairs that their significant others can only suspect.

Assayas, well known here as in France especially for his mysterious “Clouds of Sils Maria” (about a film star who is shown a reflection of herself in the latest drama she’s in), again employs the transcendent talents of Juliette Binoche, this time in the role of Selena (Juliette Binoche), who performs in the role of an actress, shown here in the movie’s only action segment. In a film that more than touches on the latest ideas in our ways of communicating through books, Assayas puts together Alain (Guillaume Canet) with his wife Selena, but more on a professional level with Léonard, the writer who has been regularly published by Alain. This time things are different. Alain suspects that Léonard is having an affair with Selena, so to get revenge without specifically accusing the writer, he takes Léonard to lunch only to tell him at the conclusion of the entrecôte and terrine that he will not publish his latest novel.

He has good reason for his suspicions since Léonard puts the people in his circle into the novels—which he correctly calls auto-fiction (novels that are thinly disguised plots involving his actual doings). One of the women in the book acts suspiciously like Selena. At the same time Léonard enjoys a long term relationship with Valérie (Nora Hamzawi) a political consultant, who likewise suspects that the writer is having an affair but is certain that the liaisons are with someone else.

On the one hand, “Non-Fiction” throws around a lot of ideas dealing with the present, digitalized world, in which people may or may not read literature on their Kindles. Regardless of the popularity of e-writing, books are not selling as they had been in the past. More prominently, though, Assayas is interested in the sexual round-a-lay that involves his witty and sly characters—the magnificent Juliette Binoche shining forth as you’d expect—giving the film its appeal as a sex comedy with commentary, highlighting Léonard as the anti-materialistic technophobe contrasted with the editor, who is more than willing to swim along with the current tide to stay in business.

French films are known to be talk-a-thons, and in this case, that’s mostly what you get. Consider editor, writer and their love interests sitting around Alain’s villa holding their barbecued meat on their laps rather than on tables; the same people seen separately as couples in their own homes, and the writer’s having to defend himself against a critical audience during a book talk insisting that Léonard is writing autobiography rather than fiction.