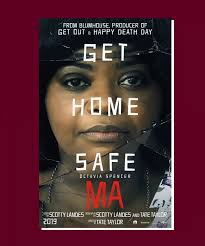 When people are asked how they enjoyed their years in high school, their answers might make you think of movie critics. With us reviewers, there is often little agreement, some saying that such-and-such movie is “a triumph, an instant classic,” while others call the same film a “Turkey,” a “Lemon,” or a “Dog.” What accounts for similar differences of opinion about high school? Probably those who say the years were “the worst of their lives” while others say “I’d give anything to go back and relive those years,” has to do not so much with their grades or their teachers, but how they were accepted by their peers. Those who were bullied “hated high school” while those treated as though they were captains of the football team “loved it.” Along comes a killer thriller called “Ma,” which Melania Trump ought to see when she’s not watching her husband in the ring with sumo wrestlers. The first lady took upon herself the task of stopping all bullying among the young. Her motto: “Be kind to each other” which has as much effect as Nancy Reagan’s “Just say no.” Director Tate Taylor, whose “The Help” won a Best Actress academy award for Olivia Spencer, wants to show that even if bullying ends on the day of high school graduation, its effects are far reaching, at least for some victims who are hell-bent on revenge.

In the first horror movie led by an African American female, Olivia Spencer anchors the proceedings as Sue Ann, the title “Ma.” Through flashbacks edited smoothly by Lucy Donovan and Jin Lee, we get enough of Sue Ann’s backstory to make us believe in the vengeance she seeks. She is out for blood just like Sissy Spacek’s “Carrie” in Brian De Palma’s shocker; however Sue Ann was humiliated not just at her senior prom like Carrie but throughout her years in high school. Now, some time later as an adult, she will get back for that, not only against sixteen-year-olds who had nothing do to with Sue Ann’s high school days but also some who directly made her life miserable.

Filming by Christina Voros in the director’s Mississippi birthplace (though in the city of Natchez), Taylor, using a script by Scott Landes in Landes’ first feature film screenplay, “Ma” finds Sue Ann pleaded with by a rowdy group of underage folks who ask her to buy liquor for them, needed for a party. At first she demurs, probably playing hard-to-get, then gives in, not only getting the sauce but inviting the lot of ‘em to her house. She hosts them in her basement, warning them never to go upstairs (where they would find African objets d’art thereby emphasizing a racial component in the movie), which makes us in the audience certain that they would use her private bathroom and, in a switch from the situation in “The Help” would be punished far more than Tate Taylor’s Minny Jackson in that film.

Soon the house is wall-to-wall kids, having a ball until two of their parents, the mother (Juliette Lewis) of adolescent Maggie (Dana Silvers) and Ben Hawkins (Luke Evans), the father of Andy (Corey Fogelmanis), catch on to the danger faced by their children. But before that happens, director Taylor treats us to rousing parties, where an innocent Maggie is pressured to vape, smoke a joint, drink, and even kiss. It turns out mama Erica was once young (Skyler Joy) as was Ben Hawkins (Andrew Matthew Welch), the two guilty as hell in bullying and humiliating young Sue Ann (Kyanna Simone Simpson).

Though there are racial implications in the picture, don’t expect “Ma” to be another “Get Out.” Given a powerhouse performance by Octavia Spencer, whose facial expressions give away every emotion, and fine ensemble acting particularly by Juliette Lewis and Diana Silvers, “Ma” delivers its chills in a runaway climactic scene as the body count mounts. Allison Janney does a cameo as the veterinarian, Dr. Brown, who makes the mistake of hassling Sue Ann, her assistant, and none other than Taylor Tate shows up as Officer Grainger.

High school bullies should be required to see this movie. If they can think past the coming Saturday night’s party, say, ten or twenty years later, they may be warned sufficiently to “be kind to each other.”