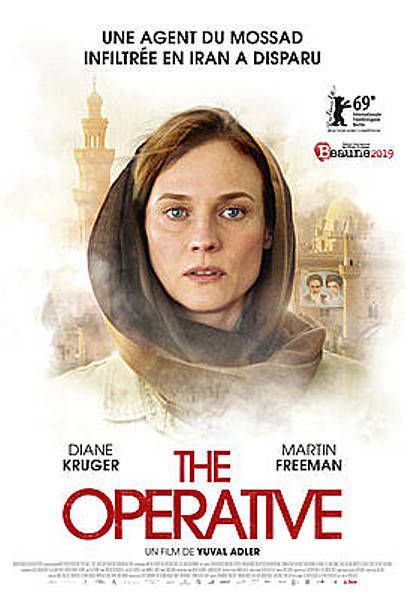 You would expect Yuval Adler, a director whose freshman feature, “Bethlehem,” bounce back and force in the plotting, getting diverging points of view from people involved in the spy business. “Bethlehem,” about the complex relationship between an Israeli Secret Service officer and his Palestinian informant, finds the director coloring his new movie with the same complexity of his first. “The Operative,” based on Yiftach Reicher Atir’s book “The English Teacher” (available from Amazon for under ten bucks), excels with yet another gem of a performance from Diane Kruger, a German actress who is not only fluent in English but speaks it with an American accent. Kruger, who studied with the Royal Ballet of London until an injury ended that career, may have endured a blessing in disguise as she is easily among A-list actors sought for diverse roles whether a revenge thriller like “In The Fade” about a woman played by Diane Kruger who seeks revenge when a car bombing kills her husband and son, or “All That Divides Us,” examining the relationship of slum dwellers and a bourgeois family, with Diane Kruger playing the daughter of Catherine Deneuve who needs saving from a relationship.

I occasionally wonder whether some of these movies that switch back and forth would be better served by a chronological pattern but we take what we’re given. Here Thomas (Martin Freeman), a “handler” operating with the Israeli Mossad in Germany, works this time with Rachel (Diane Kruger), whose principal mission is in Tehran. Rachel is a loner, admittedly often lonely as well, a woman involving herself in a romantic relationship that could damage a major operation: that of setting up an electronics company to convey equipment to Iran which is deliberately destined to fail. She likes Tehran (there’s no city like it says another character) but without knowing the language, she does her job as an English teacher to young Iranians. By coincidence, Farhad (Cas Anvar), an executive with the company, hits on her and she responds. Adler, who scripted the adaptation of “The English Teacher,” makes us wonder whether the relationship with this playboy-exec is part of a game that she is playing or whether she has made the cardinal mistake of sleeping with the enemy.

As word gets back to Germany about their agent’s faux pas, arguments break out among Mossad agents, some of whom want to “take out” their flawed operative despite Thomas’s vigorous opposition. The most suspenseful scene arises when Rachel, burying her body on the floor of a truck with Iranian men whose loyalties are unclear. One of whom actually tries to rape her in a fearfully claustrophobic setting.

This is an espionage tale that’s more John Le Carré than 007, with a complexity of plotting that might make viewers desire a second viewing.

Kolja Brandt films partly in Berlin, though the areas representing Tehran are not given either on Wikipedia or the Internet Movie Database. In English, Hebrew and Farsi with English subtitles.