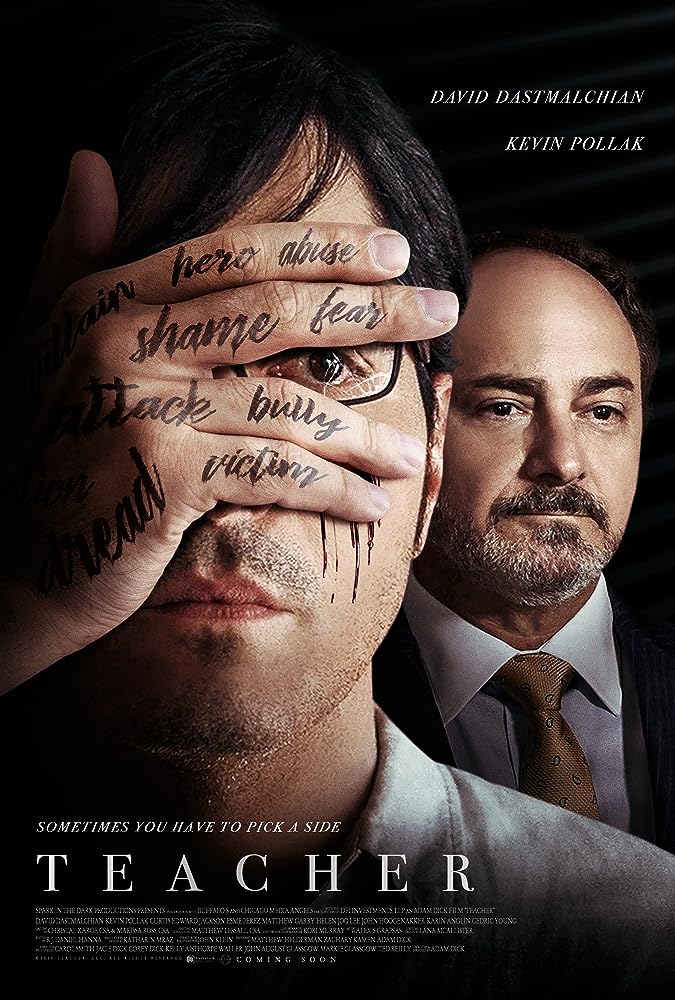 Melania Trump’s took on a mission as First Lady to deal with cyberbullying. Her “Be best” message is probably at least as effective against bullies as Nancy Reagan’s Just Say No made a dent in drug addiction. Cyberbullying aside, the most painful kind of bullying occurs directly, physically, not on the ‘net, although the latter has been unfortunately responsible for suicides among victims. “Teacher,” Adam Dick’s movie, which deals with both forms of bullying, has a clear message, which is that bullies are people who have been abused themselves. His characters, from a 16-year-old student who commits horrendous acts of torturing others, to the title character himself, now an English teacher who had been physically attacked in the past, commit acts of bullying which reflect back to their own childhoods. One of the abusers is a sixteen-year-old kid who you will think has always been coddled and who is sufficiently respected by his classmates, turns out to have been a victim, while the teacher, picked upon when he was of middle school age, has a psychotic break, doing what you’d never expect such a meek gent to execute.

There are surprises in “Teacher,” making it often riveting in its brutality. James Lewis (David Dastmalchian) serves as an English teacher in a suburban Chicago high school. It’s no coincidence that the play he chooses for his class, “The Merchant of Venice,” is his preferred text given that Shylock, like the teacher and like one particular kid in his class, is both victimizer and victim. As a kid himself (played by Bryce Dannenberg), he was endlessly taunted, in one scene pushed into the mud by a body of water by young men who threaten to drown him. Now, as an adult with a drinking problem and undergoing the stress of an impending divorce and anxiety about making tenure, he has the making of a gentle, almost saintly man who is ripe for a psychotic break.

He is pained by the experience of Daniela (Esme Perez), who is cyberbullied for her race and who becomes a candidate for suicide, but even more so by the experience of Preston (Matthew Garry), an intelligent, sensitive boy with a hobby in photography who is tormented by jocks under the leadership of Tim Cooper (Curtis Edward Jackson). In one scene on a school bus, Cooper plunges a needle into Preston’s seat causing a back injury, but that injury turns out to be scarcely worth worrying about when his very life, or at least his eyesight, is in Cooper’s crosshairs. Cooper is a rich kid pushed to achieve as a pitcher for the high school team by his rich, well-connected father Bernard (Kevin Pollak). The stage is set for a showdown involving father and son, the teacher serving to be the surprising combination of hero and villain.

Writer-director Adam Dick, building upon his twenty-minute short “Teacher” about an unbalanced high-school instructor, turns out an expanded freshman film sure designed to engage the emotions of his viewers. He is fortunate in employing the skills of David Dastmalchian, who can do meek and aggressive with authority.