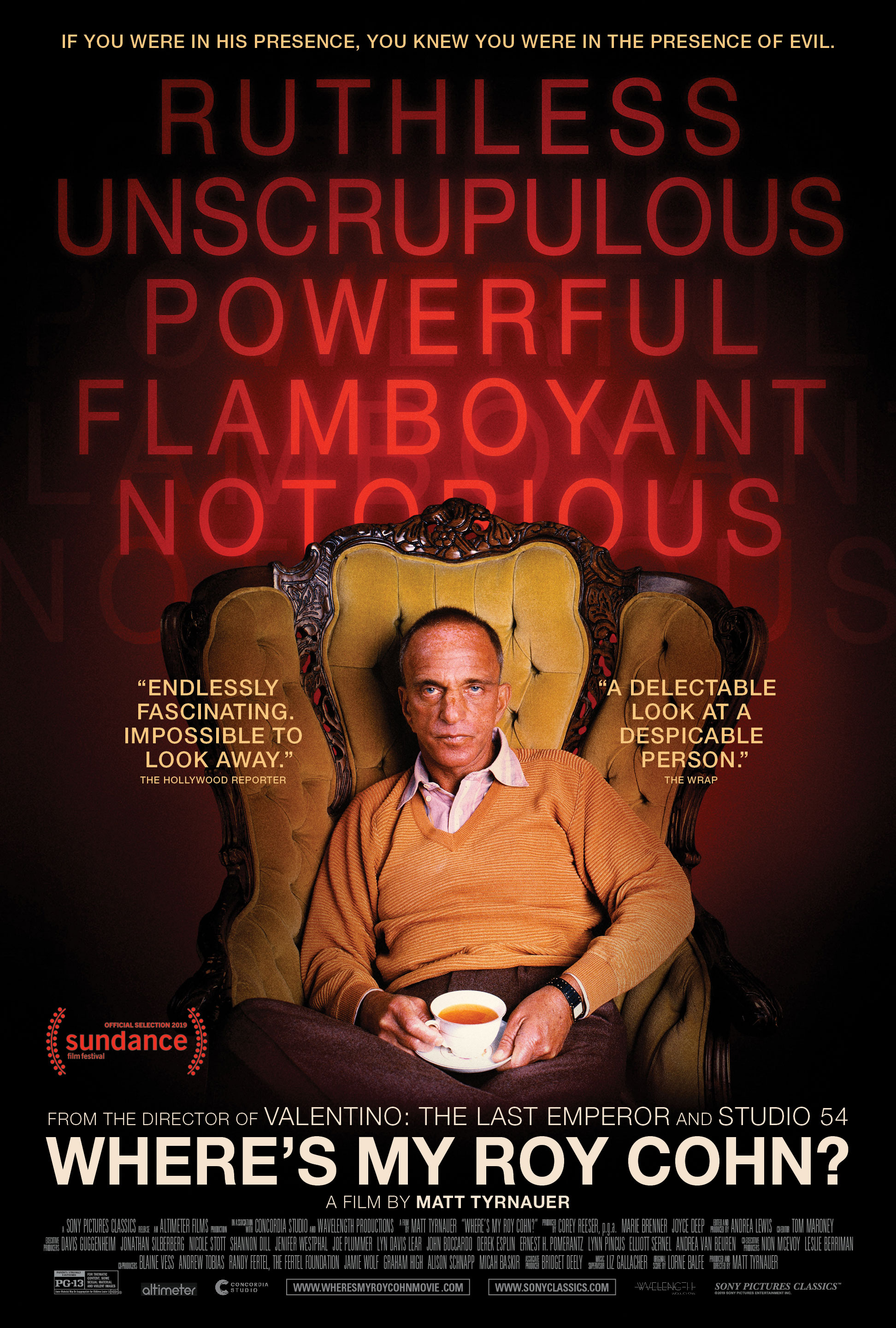 Documentary film-makers have no obligation to be impartial. Some of the best known of the group, Morgan Spurlock (“Super Size Me”) and Michael Moore (“Sicko”) gain their audience by being one-sided while at the same time marshalling (or as some would say, cheery-picking), facts. From “Citizen Jane: Battle for the City,” taking aim at an urban developer championing highways over public transport, to “Scotty and the Secret History of Hollywood,” about a man who was sexual procurer to the stars, the director shows an intent on bringing down celebrities who are not considered among the best of men. His coverage now of Roy M. Cohn, treated like a prince by his mother and emerging with a mind so brilliant that he graduated from law school at the age of twenty, says nothing new. Those of us who remember the Army-McCarthy hearings, Cohn’s standing up for mafia chieftans and such questionable characters as Wisconsin Senator Joseph McCarthy and now President Donald Trump, should give you an idea of his talent and desirability as defense council. But Cohn, who died of AIDS at the age of fifty-nine without even coming out of the closet as a homosexual, was ultimately disbarred.

Director Tyrnauer, who may have gone overboard in implying that Cohn’s very “reptilian” face is a reflection of his sordid sole, may instead be simply the result of his being birthed by Dora Cohn, a woman supposedly so homely that one Al Cohn was offered a judgeship if he would marry her.

Some viewers might disagree that there was anything wrong with the way Cohn prosecuted Julius and Ethel Rosenberg, who regardless of their treason did not deserve to be executed. To assure that the Rosenbergs would be denied clemency or have their death sentence commuted, he illegally spoke by phone with Judge Kaufman urging him to deliver the ultimate sentence. For that, Cohn was called a self-hating Jew. And since when you lie down with dogs you get up with fleas, Cohn could deserves condemnation for being the chief counsel of Wisconsin Senator Joseph McCarthy, who built a reputation and following among far-right Americans by falsely stating that our state department and army were infiltrated by members of the Communist Party. In fact during the Army-McCarthy hearings in 1954, when McCarthy accused a member of a Boston law firm of being a front for the Communist Party, army counsel Joseph Welsh, disgusted by the implication, delivered the famous quote, “Until this moment, Senator, I think I never really gauged your cruelty or your recklessness. “Let us not assassinate this lad further, senator. You have done enough. Have you no sense of decency?” Eighty million people tuned in to the hearings, many ultimately realizing that McCarthy was not rational in his anti-Communist he purported to be.

Among the charges against Cohn in his disbarment hearings, the lawyer was found to have pressured a dying man to amend his will thereby foreshadowing a windfall of money to Cohn. The signature of the victim looked in no way like anything in the English alphabet, just a bunch of scrawling as the poor fellow was too week to write a single letter. Nonetheless, a viewer knowing little to nothing about Roy Cohn might come away from this documentary without being impressed that Cohn deserved to be disbarred and treated like a villain. Everybody is entitled to a lawyer. Representing alleged Mafioso, being chief counsel to Senator McCarthy, and advising Trump in the developer’s early days do not appear to constitute in my mind a solid case for the ultimate penalty of disbarment.

This documentary is by no means a stale history lesson as Donald Trump is brought into the proceedings with mention of Trump Tower which involved the Trump family’s corruption from the building of the tower to the way that many illegal Polish immigrants working on the project were not paid. As they say, in movies, the villain usually gets the best role, has the sharpest dialogue, and in his excoriation of Roy M. Cohn, Matt Tyrnauer does not disagree.