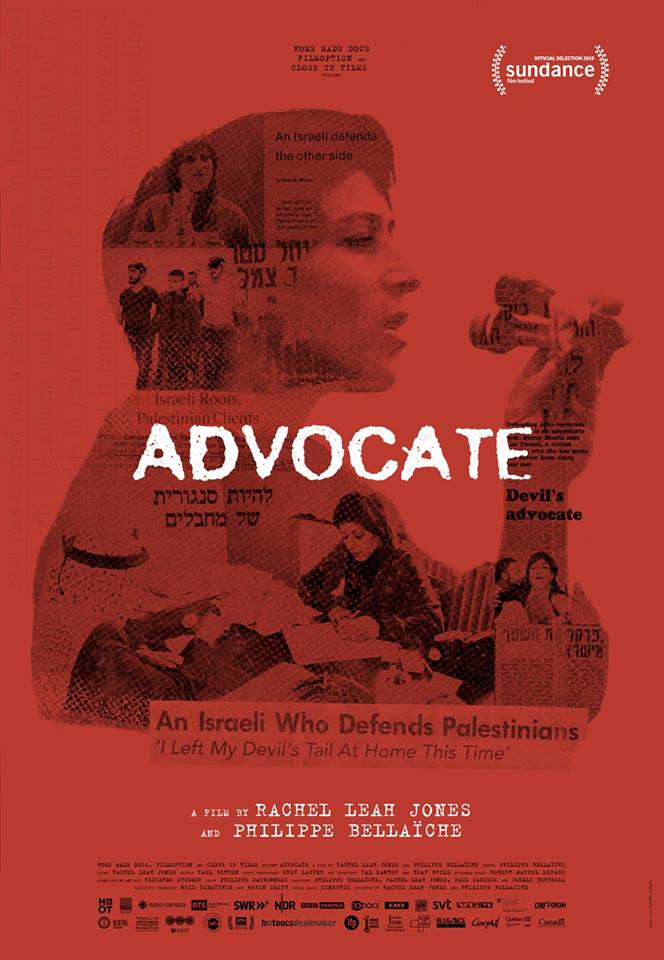 Some of us in the U.S. are proud to say that Israel is the only democracy in the Middle East, but Palestinians and ordinary people in large parts of the world may disagree. It’s true that Israel has a working parliament, the Knesset, with real powers (if the multiple parties could ever agree on anything), but Israel continues to occupy land around surrounding it in Gaza, the West Bank and the Golan Heights. And while the court system really works, it functions better for some (the Israelis) than for others (the Palestinians). One Palestinian a while back sums up: “Israel has democracy for the Jews, dictatorship for the Palestinians).

Where else, though, can you find an occupier which has lawyers within its borders defending the occupied? Berkeley-born Rachel Leah Jones, who majored in Race, Class and Gender Studies with a graduate degree in Documentary Media Studies, and Parisian Philippe Bellaïche, who has been honored by several awards for his films, focus on Lea Tsemel, that rare Jewish attorney who has spent her career defending Palestinians, has been regularly attacked by her own people who presumably never heard of the concept that a defendant is innocent until proven guilty. How does she have the chutzpah to take on cases involving suicide bombers and terrorists? Somebody has to do it. If Palestinians do not put forth a lawyer who can compare with Tsemel in the court, she’s the one to do it. (Aside: Even Eichmann had a trial, but with a German attorney.)

No doubt about it. Documentarians Jones and Bellaïche love Lea Tsemel, who is in virtually every scene, someone whom Americans of a certain age might compare to New York’s late great Bella Abzug. Though she has defended Palestinians for decades, the focus is on two cases. One involves a 13-year-old boy who is arrested for taking part in what the prosecution calls attempted murder. He was an accomplice to the kid who actually stabbed two Israelis of about the same age. He too held a knife and that is what dooms him to face either a few years in a juvenile center or, if he went to trial a considerably longer stretch in an adult prison. Tsemel appears to have convinced the family to take their chances on a trial, given that he did not actually commit the stabbing.

Another case involves a woman who is arrested for terrorism when her car, laden with explosives and apparently meant to cause several killings, blew up accidentally, injuring her. You might think that given the injuries she sustained, the judges might not come down as harshly on her as they would had she succeeded.

As for why Tsemel does what she does though by her own admission she is bound to lose most of her cases, she explains that this is the right thing to do. “After fifty years of occupation” becomes almost her logo. Her long-term husband, Michel Warschawski, also a demonstrator for Palestinian rights, was once given the option: either give up all political relationships with Palestinians and be freed immediately, or suffer years in jail. He chose the latter, largely because of prompting from his wife.

Tsemel believes by implication that were there a two-state solution and the Palestinians had their own country, there would be peace. End of terrorism. Whether she is correct is anybody’s guess, but I’d imagine the typical viewer of this documentary who is pro-Israel even while objecting to the Netanyahu right-wing government would be skeptical.

From time to time the screen is bisected with animation to protect the identities of the advocate’s clients. This is a distraction. One wonders why faces could not be clouded over as they are in American movies. Of course there is an imbalance of power. Has any society in history occupying another ever given equal rights to the conquered?

Lea Tsemel turns out not only to be a fine lawyer (despite losing most of her cases) but an excellent actress, who dominates
proceedings and rivets attention. The film played at a couple of dozen festivals and is scheduled to open January 3, 2020
at NewYork’s Quad Cinema. In Hebrew, Arabic and English.