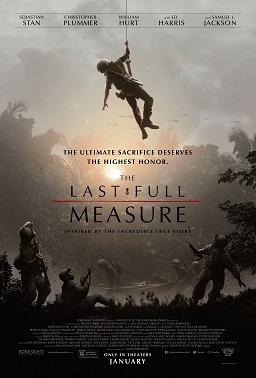 Todd Robinson, whose “Lonely Hearts” dramatized the true story of a hunt by two homicide detectives for the pair of “lonely hearts” killers who seduced victims through the personals, might not surprise you for the war movie he directed over a decade later. Yet “The Last Full Measure,” a title whose expression means “death,” is likewise based on a true story which, though not involving city detectives, instead concentrates on battlefield heroism. Its hero is not only the soldier, William Pitsenbarger (Jeremy Irvine)but also Scott Huffman (Sebastian Stan ) in particular who gave up a promising career promotion to unfold a thirty-year-old story of an airman denied the well-deserved Medal of Honor by members of Congress covering up an exposure of bad battlefield decisions. Also involved but also of the folks who held out hope for a three decades that a wrong would be righted. That hope came to life as Huffman interviews Tully (William Hurt), a bosom buddy of the Vietnam war hero and also of Takoda (Samuel L. Jackson), who witnessed Pitsenbarger’s bravery during a battle taking place 56 kilometers outside of Saigon, William Pitsenbarger (Christopher Plummer) and Alice Pitsenberger (Diane Ladd) as the parents of the airman, and two other on the spot witnesses Jimmy Burr (Peter Fonda) and Mott (Ed Harris).

“The Last Measure” takes place in two time periods, one involving the bombs and bullets ducked in 1966 by a pinned-down group of soldiers whose commanders had apparently made bad decisions, and in 1998, involving scenes taking place in the Pentagon and on the territories of witnesses and lobbyists for the heroic William Pitsenberger. The film will recall similar heroism by Desmond Doss (Andrew Garfield) in “Hacksaw Ridge,” looked at with contempt by officers for his stand as a conscientious objector refusing to pick up a rifle, but who nonetheless saved the lives of some 75 men in World War II.

The principal role in “The Last Full Measure,” though, is that of Sebastian Stan, whose Pentagon careerist Scott Huffman determines to dig up new evidence about why Pitsenbarger, though originally considered for a posthumous Medal of Honor (the highest award given to combat soldiers), was downgraded to an Air Force cross. Those who knew Pitsenbarger had been sitting on the case year after year, never giving up hope that the medal would be upgraded, though such a review rarely recommends such an action.

Among those testifying to Huffman, perhaps the most interesting is Sam Jackson’sTakoda, a salt-of-the-earth gent who in one point grabs the recorder out of the interviewer’s hand and tosses it into the river. As the story unfolds, we learn that 20 infantrymen remained alive though hit but a burst of enemy fire, some coming from snipers in nearby trees near Vietnam’s Cam My. Helicopters are sent in to rush the wounded out of the area. When young Pitsenberger is offered a ride by the last chopper out, giving him a chance to depart the scene, he refused, dedicated to helping the wounded and comforting them with his words.

With battle scenes photographed in typical war-movie style DP Byron Werner in Thailand and with tense scenes accentuated by Philip Klein’s sometimes intrusive music, “The Last Full Measure” cannot avoid sometimes descending into soap-opera inspired dialogue. Nevertheless the subject is well served by this narrative drama, giving many in the film audience too young to have followed the Vietnam War a hint of the action, particularly of the guerrilla warfare engaged in by the enemy, some of whom serving in regular jobs during the day and as fighters by night.