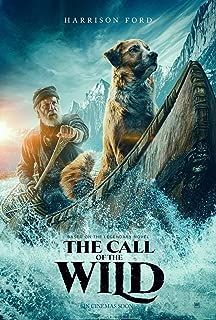 Dogs have been bred by us sapiens for ten thousand years, and through that brief period of evolution have emerged as both a help and a best friend. They have been used by the British aristocracy for fox hunting, by lesser Brits for catching rats, by some for pulling sleds up north, and now in America for sniffing out drugs and explosives. What happens to Buck, the principal character in the current version of Jack London’s most famous, short novel “The Call of the Wild” should not happen to a dog. The St. Bernard, Scotch, Collie mix goes through a lifetime of experiences, not all bad by any means, but how he comes of age makes for an appealing adventure, especially for kids. As for the nature of the animals in Chris Sanders’s dog opera, there’s much to be said for substituting animation for the real four-legged creatures. Not only would Lassie, Snoopy, Toto, Marley, Beethoven, Skip, Hachiko and Benji resist some of the scenes in this “Wild.” You would not want even Cujo to be whipped by the cruel masters, forced to pull sleds with some passengers as obnoxious as you would find on the NY subways. Falling through ice while trying to save a drowning woman despite the way some human beings had treated him proves that dogs will give unconditional love to people unless pushed to even further limits.

Jack London has published the novel at first by a series in the Saturday Evening Post, a work considered cinematic enough to warrant the productions of movies in 1923 (where he opens as a puppy and never barks), in1935 (where the romance between Clark Gable and Loretta Young has priority over dog doings); also in 1972, 1976, 1996, 2009, and now. Some, like this one, are loosely adapted from the London novel.

With stunning mountain views and scenes set in Wild West studios, the story opens on the 140 pound (mostly) St. Bernard (actually mostly an animatronic animal) living in Santa Clara, California toward the end of the 19th century. The dog is a handful, in one scene knocking over a large table set for a banquet and eating enough to allow a month’s hibernation. Kidnapped by a bad man seeking money, Buck is sold, trained as a sled dog, and driven through ice and snow delivering mail to miners prospecting for gold. Ownership is taken by a rich woman and her evil brother Hal (Dan Stevens), who has no problem using a club on the growling Buck. They ignore advice from a grizzled prospector John Thornton (Harrison Ford) to wait until the spring melt. The dog attaches himself to Thornton, who talks to Buck about his desire to return home. Later adventures pit Buck and Thornton against Hal with climactic results.

If your kids were not told that the dogs were not real, only the most astute would recognize that Buck and an assortment of dogs, wolves, rabbits, and birds are not flesh and blood. This is a dandy adventure for the small fry and should be tolerated well enough by the adults. Some of the more sensitive youngsters might be started by a few scenes of violence, but in this adaptation the directors have cut around the most egregious cases of mayhem such as the falling of a team of men and dogs together with the sleds into the river to drown.

At an hour and forty minutes, the movie does not outlast its welcome and might even encourage your little ones later to put down their phones and read some of Jack London’s adventure tales. All is told in chronological order in a story that ultimately and perversely goes against the idea that dogs prefer people more than their own kind.