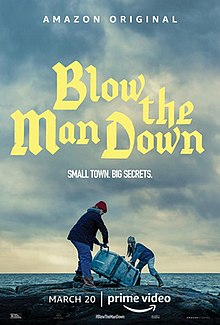 Early on we see a sign in one house “Bed and Breakfast,” which coyly hides the term “Bordello,” which would have completed the alliteration. The real problem is that if the Bed and Breakfast place were really open for innocent enough tourists, where would they get the business? The small town in Maine is utterly provincial, and to top it off the area is regularly snowed in with damp weather that might make London seek like a climatic dream. This is a bad location for tourism but a good one for mystery. Bodies turn up including one of a hooker, but the real interest of writer-directors Danielle Krudy and Bridget Savage Cole is the dark secret that involves not just the madam but a trio of elderly women who appear ready for redemption.

“Blow the Man Down” is a sea shanty sung in the opening scene with delightful harmony by a group of grizzled fishermen, and another shanty will serve to bookmark this movie, which was awarded best screenplay at the Tribeca Film Festival. The script is an original, nicely combining a detective story with a look at an ambiance of a part of America not often seen in the movies.

Priscilla Connolly (Sophie Lowe) and Mary Beth (Morgan Saylor) do not look like sisters and what’s more, despite their kinship they exhibit different personalities. When their mother dies, the sisters are determined to continue the fish business, though Mary Beth, unlike her sister, talks often of wanting to bolt from the town. They have occasional chats with their mother’s pals Susie (June Squibb), Gail (Annette O’Toole), and Doreen (Marceline Hugot).

Mary Beth, always the adventurer, picks up a guy at the bar, becoming anxious when she sees a gun in the glove compartment and a trunk filled with blood. He calls her “cute,” touches her leg, finally attacking her, resulting in his being harpooned in the neck and as dead as a punctured lobster. You and I would probably plead self defense, but the defender instead informs her sister who help in burying the body in the deep.

The person of major audience interest is Margo Martindale as the town madam, Enid, longtime friend of the trio of elderly ladies, any one of whom could serve as the lead in Joseph Kesselring’s play “Arsenic and Old Lace.” Nobody will mess with Enid until somebody does, when her three pals, after hearing that one of her hookers has been shot in the head. Gayle Rankin performs as a character who is one of Enid’s workers, and Will Brittain pounds the beat as Justin, a young police officer who has a liking for Priscilla and, in one scene as you think that he will collar the two sisters, he instead follows up his undeaclared courtship by accepting an invitation to the sisters’ fish dinner.

At our time, when women are increasingly empowering themselves, “Blow the Man Down” serves as another example of how the sisterhood look out for one another. The film does not try to satirize small-town living or houses of ill repute but accepts the flaws of this remote coastal village of Easter Cove without judging.