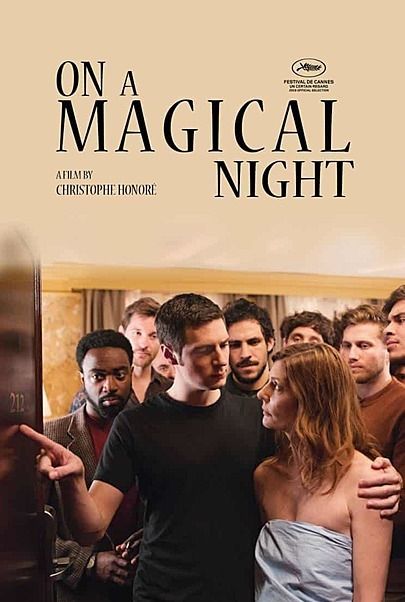 “The French don’t care what they do, actually, so long as they pronounce it properly.” So says Professor Henry Higgins in “My Fair Lady,” and if Higgins were present at the Cannes Film Festival watching “On a Magical Night,” he would be doubly assured. Under the direction of Christophe Honoré, a busy man whose “Les chansons d’amour” deals with a threesome evoking the mysteries and fragilities of love, is in his métier with “On a Magical Night.” When one character says “When should we die: in our 30’s, our 40’s?” we know we are dealing thematically with people who regret the passing years but who had used those periods to accumulate multiple partners. Maria Mortemart (Chiara Mastroianni) and Richard Warrimer (Benjamin Biolay) have been married for twenty-five years, affording Maria a bounty of male lovers, none gay even if the writer-director’s previous picture, “Sorry Angel” finds one Jacques in love with Arthur. Since Richard claims never to have cheated on Maria, he resents her infidelity.

The movie is theatrical, most action taking place in Room 212 (the original title is “Chambre 212”) and across the street in a hotel. Bringing to mind the Beatles’ “Will you still need me, will you still feed me, when I’m 64,” Honoré considers a question that has must have been asked by anyone with a pulse, “Would I have done anything different if I could reconsider my choice for a life’s partner?” The question is not resolved, but Honoré uses magical realism to examine the fantasies of Maria when, after an argument with Richard she moves to a hotel across the street and considers all the men she slept with during her marriage and the two principal women in her life as well.

So this time the cheater is not the man. Maria, a glamorous law professor, looks through the hotel window at Richard who, by now, is kicking up a storm, and spends the night receiving “visits” by Richard’s piano teacher Irène Haffner (Carole Bouquet at 60 years and Camille Cottin at 40), by her dead mother (Marie-Christine Adam), and by a succession of past lovers including one present one, Asdrubal Electorat (Harrison Arevalo). The men include Richard as a young adult (Vincent Lacoste) and as her teen student(Kolia Abiteboul). Stéphane Roger performs as La Volonté, a one-man Greek chorus singing like Charles Aznavour.

Much of the time she ponders her bedding Richard decades ago, which might have the audience wonder whether this technicality means that she is not really committing infidelity. Since this is a French movie, there’s lots of talk, largely of regrets, the veritable platoon of men and women taking up the space of the hotel room but giving Maria the freedom to conduct most of her truth-seeking chats with the piano teacher.

Light and fluffy like a French farce but played on a more somber and less over-the-top performances of Feydeau’s plays, “Chambre 212” might be just the thing we need since our globe went viral. The conclusion, a dance to forget your troubles to the bouncy tunes of Barry Manilow, may have been planned to have us in the audience forget for a while the seriousness of love and sex and life. For those of us curious to soak in trivia, you probably guessed that Chiara Mastroianni is the daughter of Marcello Mastroianni’s and Catherine Deneuve and that the two principals, Mastroianni and Biolay were once romantic partners.