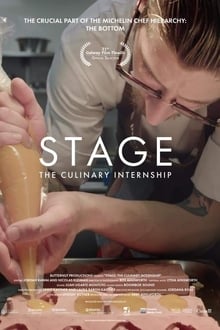 Technology changes, forcing people to give up some of what they learn while training for a career, but there is one thing they can’t take away from you, and that is the ability to think and feel. That is the message that oversees what goes on in God’s country in the Northeast corner of Spain, where thirty applicants are chosen out of fifteen hundred to take part in a nine-month program as unpaid interns at the Mugaritz Restaurant. In this brief documentary writer-director Abby Ainsworth gives her movie audience a look at what goes on in the kitchen of one of the world’s top fifty restaurants, as chef interns with an average age of twenty-four come together to learn technique, of course, but more importantly to put their very souls into the preparation of food.

Among the words of wisdom: “It’s better to show disgust at a dish than to feel nothing at all.” Those who persevere through the rigorous training program are letting us in the audience know that while talent is important, stick-to-ivness is mandatory. In other words, “How do you get to Carnegie Hall?” “Practice, practice, practice.”)

Abby Ainsworth, whose envious career immerses her in the food industry, tries to “find the beauty of a story outside its face value” as she states in production notes. While she spends a considerable time in a restaurant kitchen watching the thirty interns prepare dishes with designs that would make even top French chefs envious, she is as interested in showing us what these interns are made of, allowing them to discuss their backgrounds with one another, principally how they became passionate about cooking.

The Mugaritz Restaurant (“muga” means “border”), located in Errenteria, Guipúzcoa in Spain’s Basque country, is one of the world’s most celebrated places to chow down. Its founder and chef, Andoni Luís Adúriz, closes the restaurant four months of each year, when much of the training of interns takes place. The movie title “Stage” is a French term meaning “unpaid position.” focusing on two-star Michelin restaurant’s program of mentoring the great chefs of tomorrow.

Ainsworth concentrates on four interns. Kim Joon from South Korea has served in his country’s army and speaks fluent English but is likely under stress because he must follow instructions in Spanish. Alexandre Castelló from Spain has experience cooking in his father’s family restaurant. Pawel Poljanski is from Poland, failing three times to be accepted to the stage program, but he perseveres and, though accustomed to working on his own must acclimate to the group of twenty-nine others. Sara Merendes from Spain wonders why she majored in graphic design in college when her real métiér is cooking.

All are competing to be among a select circle to be chosen for an advanced position in the restaurant’s Research and Development program, which brings us to how this restaurant is probably unlike any for which you’ve dined. The food consists admittedly of dishes that a diner may either hate or love. The design is avant-garde given that some of the dishes include aged mole leaves and bone marrow; natto pie with palo cartado; snails in ceviche over frozen teff; pinecut kagami; and the one that impresses me the most, oyster frozen kiss. This last item, which Aduriz’s wife called “cold,” looks bizarre, but so does almost everything that these interns in their mid-twenties are preparing. (Incidentally, they do not use gloves.)

On a technical note, the music in the soundtrack is intrusive. This is not a thriller and no music at all would for me be a desideratum. English subtitles are available throughout with Spanish and English each the lingua franca of the production.

While the internship does not pay, you get room and board—and my, what board and what a view from the room!—so presumably you need to lay out only for air fare and for occasional personal needs. Feel free to make reservations at the restaurant, and take a trip to Spain’s autonomous Basque country. You can call 34-943-52-24-55, pay a 50€ deposit based on the expected cost (without drinks) of 220€. Then head to Aldura ladea 20 in Errenteria and enjoy.