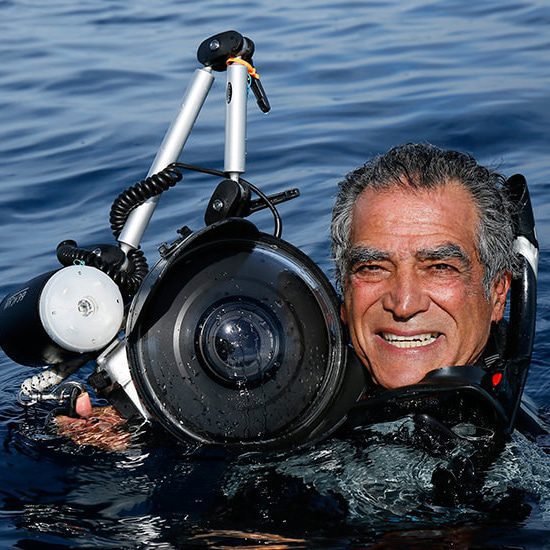 People who go to foreign lands during their vacations, stay in good hotels, dine in fine restaurants, do some sightseeing and attend to some group trips are tourists, not travelers.  Perhaps one step higher on the ladder  would be those who go to Portillo in August to ski or to Botswana to take picture of animals in the wild.  At the highest level, literally, would be those challenged to climb Mt. Everest, but that’s been done.  Here’s something that has not been done until now, something you probably all dream of doing at least once in your life: that’s photographing polar bears while swimming alongside them, trying not to be eaten at least until you’ve given them your best shot and have the folks in the boat scoop up your camera.
Now comes a movie that shows just what it’s like, particularly if your trips to Canada have been only to film festivals in Montreal and Toronto or to see some actual filming in Vancouver.  “Picture of His Life,” which has archival film of Israel during the 1973 war and some shots of Tel Aviv, spends most of its brief running time in the Canadian Arctic, home of Inuits, some of whom consider theirs a dying culture as their children move to the cities.  An ensemble of travelers fall under Yonatan Nir and Adam Ravetch’s lenses, all of which is directed by Nir and Dani Menkin.  You know the last two for their documentary “The Dolphin Boy,” about a lad who, having been traumatized by a violent attack, is taken by his father to be treated by …dolphins.  What better candidates to do this movie than these?
Though he could not have taken pictures of polar bears under water without the help of Joe the Inuit and a few others, there is probably not a single narcissistic bone in Amos Nachoum’s body.  When Narcissus looked at a body of water, he saw his reflection and fell in love.  When Amos does the same, he sees large animals and is head over heels in love, not with himself but with bears, sharks, whales and the like.  Merely to get to the Canadian Arctic where most of the story takes place required Amos to take five flights from Tel Aviv, stopping among other places at San Francisco, Vancouver, and Winnipeg  and finally with a small wind-shaken plane that had a difficult time finding a place to land in one of the most remote places on earth.
Having photographed seals, whales, sharks, marlins and alligators, he is obsessed with capturing polar bears,  not like Disney but alongside these huge, sometimes aggressively hungry mammals that can outswim humans with even with rubber fins twice over.   The directors want us to realize that Amos, having served in the 1973 Yom Kippur war which resulted in 20,000 deaths on both sides, may have received increased motivation to take on this risky project because of the scars caused by the violence.  He is shown as a younger man and now, at an age that puts some people in rocking chairs, Amos, sporting a full mop of graying hair, heads into the water believing that “without learning, there is no reason to be here,” which sounds something like Socrates’ advice that “the unexamined life is not worth living.”  Amos wants to be relevant at his age, when much of the world has little use for older people calling them, not without condescension, senior citizens.
In the action scenes, Amos dives backward with so much equipment that you wonder how all five of his planes did not crash.  In one climactic moment, he confronts a bear, tries for a shot, and fails, barely escaping with his life.   We wonder: is that all there is?  Tune in when the movie opens June 19 to find out whether he gets an iconic shot of a rare event: a mother bear swimming with her two cubs.  Did I mention that now he is the founder of a travel business called Big Animals, that takes people who think they can duplicate Amos’s adventure?
Story – B+
Acting – A-
Technical – A-
Overall – B+
© Harvey Karten, Member, NY Film Critics Online