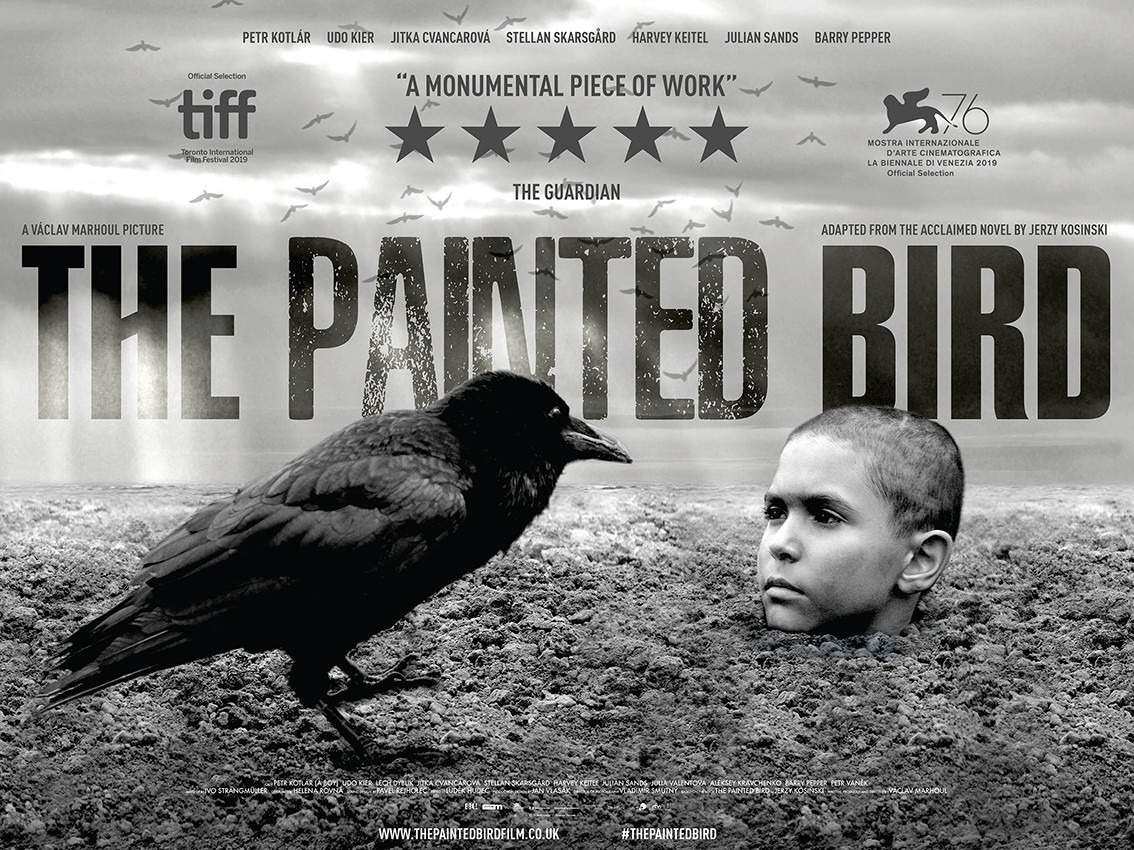 In “Leviathan” (1651) Thomas Hobbes calls life “solitary, nasty, brutish and short,” and “A war of every man against his neighbor.” Every picture of Hobbes shows an unsmiling man, looking disgusted, contemptuous, and constipated. Yet as we know after we lose our innocence that there is more than a smidgen of truth in such a pessimistic manifesto. Still, the dour philosopher may have smiled just once from his grave when the movie “The Painted Bird” was first shown in film festivals. Vàclav Marhoul wrote and directs the epic drama inspired by Jerzy Kosinski’s book about a shattered post-war Europe, which Amazon calls the story of “a dark-haired, olive-skinned boy, abandoned by his parents during World War II, wandering from one village to another, sometimes hounded and tortured, only rarely sheltered and cared for.” (Kosinski committed suicide at the age of 57, his novel available on Amazon for under $14.)

“The Painted Bird,” which was the Czech Republic’s submission for the Academy Awards held in 2020 did not make the short list for Best International Film, but I would rate it as good as South Korea’s “Parasite.” The title is metaphorically taken from an event in which a painted bird, up for sale amid scores of others, is released and promptly killed by a flock flying hither and thither, because they apparently consider him “The Other.” The inability of people to respect those who are not like them, who look different or follow different customs did not die out after World War II but is a concept relevant today as we in America mourn the killing of African-America men by white police officers. The whole of “The Painted Bird,” showing human beings cruel to a cute and polite but mute young man abandoned by his parents is an allegorical tale. Therefore, take “The Painted Bird” as a journey of authorial cherry-picking that displays, with few exceptions, a society of people in war-torn Eastern Europe taking out the misery of their own lives on an innocent boy.

Written and directed by Vàclav Marhoul, whose “Tobruk” deals with a World War 2 battalion of Czech soldiers in the Libyan desert, “The Painted Bird” is seen from the point of view of young Joska (Petr Kotlár) in a startling breakthrough role. Joska wanders through Eastern Europe during the war, only occasionally running into action by German soldiers, Russian Cossacks and regular army, but his troubles come not much from fighting units but mostly from local peasants. The boy is mute throughout but is able to hear dialogue spoken in German, Russian, Czech, and what’s labeled Slavic Esperanto. For most of the running time, Joska, who is Jewish but rarely outed as such, is pleasant looking, obedient, polite, and seemingly able to put up with tortures of ordinary people either driven to hostility from the deprivations of the war or simply full of hate.

In the earlier part of his wanderings, he is picked up by a handful of ignorant peasants, the most gentle of whom calls him a vampire. He becomes enslaved by the superstitious hag. In the movie’s goriest scene, he witnesses a stolid, unsmiling Miller (Udo Kier) who at dinnertime overturns the table on a younger guest because he is convinced that the fellow has been staring with lust at his wife (Michaela Dolezalová). He gouges out the man’s eyes with a spoon and feeds them to the cat, who is too finicky to bother. A sympathetic Joska carries the eyes to the newly blind victim who is lying, sobbing by a tree, beckoning him to replace the eyes in his socket as though they are contact lenses. Later Hans (Stellan Skarsgård), a German soldier, is ordered to take the boy for a walk and shoot him, but Hans, one of the few sympathetic characters, orders Joska to run, firing two shots into the air. Another character who shows a rare humanity is a priest (Harvey Keitel), who takes the boy into his church, fixing him up with a crucifix, asking Garbos (Julian Sands), a pedophile, to take care of him. Bad decision.

“The Painted Bird” is only tangentially a Holocaust film, a subject that the Czech filmmakers know well since releasing “The Shop in Main Street” in Ján Kadár and Elmar Klos’s 1965 “The Shop on Main Street,” in which a carpenter in a Nazi-occupied Slovak state is appointed Aryan Controller of a Jewish widow’s store. That picture won the International Film’s Oscar as did Jirí Menzel’s “Closely Watched Trains” two years later.

Opinions of “The Painted Bird” might vary from those who think the movie is little more than a relentless succession of tortures to those who, like me, consider it an epic drama in sharp black-and-white that both captures human beings acting in extremis during wartime and displaying irrational hated even here in America during a fragile era considered by some to be a relative peacetime.