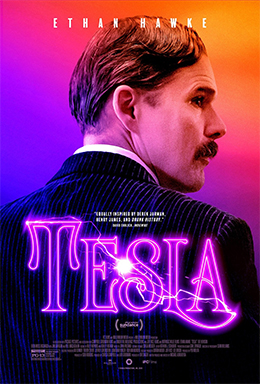 Every American has heard of Thomas Edison, considered by some to be the greatest inventor of all time, but Tesla? This is a name made familiar to some of us for the electric car that could revolutionize the auto industry. Look at the 20,000-word article on the man in Wikipedia, note that he had 300 patents in his name, that he slept for two hours a night, that he wiggled his toes because that recharged his brain, that he remained unmarried and celibate because that influenced his work in a positive way. Then you realize that here is a man who not only changed the world with his inventions but whose very life should be explored given talents that would make him one-in-a-million. Make that ten million.

As played by Ethan Hawke, who bears a physical resemblance to his character, Tesla is a man of many ideas, selling some of his patents to Thomas Edison (Kyle MacLachlan) while in his employ. He tries to sell Edison on perhaps his greatest dream, alternating current, which he believes will revolutionize communication, but Edison, who talks much and listens little shows no interest. At any rate, MacLachlan’s Edison is the only gent in the film with a sense of humor, by which filmmaker Almereyda, whose “Marjorie Prime” about holographic recreations of deceased loved ones to allow a woman to see younger version of her late husband shows the Kansas-born writer-director to be a man interested in the influence of invention on a global future.

While we see so much of Nikola Tesla’s inventions at work, there is little doubt that Almereyda wants to explore the character of the man, who, despite needing money from J.P. Morgan (Donnie Keshawarz) resists love signals from the multi-millionaire’s daughter Anne Morgan (Eve Hewson). One look at a sporting event might cast cries of fraud from a movie audience, as J.P. Morgan hits the ball with his racquet while dressed in a suit and bowtie, while his two female opponents wear long dresses.

Though at times the film looks as though it could pass for an undergraduate class in physics, the film plays with surreal images and an imaginative reach that gives hints of how Tesla’s inventions would change the future, i.e. our present. At intervals Anne opens a laptop to Google Tesla and other figures, and Edison has no difficulty consulting his smartphone at a bar.

There is one scene that could involve even high-school students, most of whom would consider the movie too highbrow for their taste and age. William Kemmler (Blake DeLong) in 1890 became the first person to be legally executed by the electric chair, actually developed by a New York dentist using alternate current. The “hot seat” was promoted as more humane than hanging, but the debut execution in Auburn prison in New York State did not go well. The guards failed to see that, the convicted axe-murderer should have had his head shaved, though there is almost a comic way that Kemmler, fully dressed, wanders into the chamber to face a dozen or more witnesses standing near him, and sits down casually in the chair saying “I’m ready to go.”

All in all “Tesla” is brainy, imaginative, surreal and inventive, a drama which without MacLachlan’s Edison would be bereft of humor. It’s a highbrow version of what could have been a less daring and duller biopic, making its technique a welcome entertainment for the right audience.