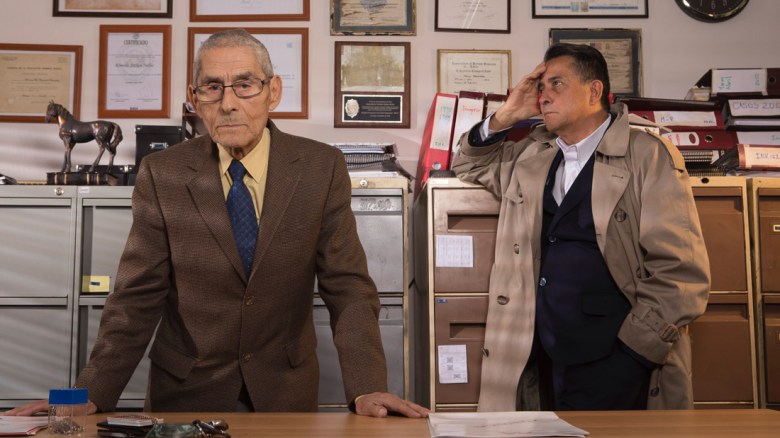 You will not be able to see the new James Bond thriller, “No Time to Die” until November, but you might consider “The Mole Agent” a story that will tide you over until then. Like 007’s “Quantum of Solace,” this one is filmed in Chile but with an all Chilean cast. Directed by documentary filmmaker Maite Alberdi, whose “The Grown Ups” takes on a group of friends with Down Syndrome attending the same school for forty years, “The Mole Agent” may look like a scripted drama but is a surprisingly adept documentary. There are three deaths and several robberies involved, yet there is not a gun, a knife or an axe to be found. Instead of an Aston Martin, a jet boat or a ski lift, there’s just one wheelchair and an array of benches. And instead of prison, you have an old folks’ home, but the characters may not consider the place much better. Replacing Q is a private eye named Romulo, and the most danger that faces Sergio, an 83-year-old spy, is being proposed to, even physical mauled, by a woman about his own age.

Though the unusual ad in the newspaper asks for a man between the ages of eighty and ninety, a reader might suspect that something is fishy. As Sergio says in his interview, old people are never recruited for paying jobs, which is one thing that Chileans and Americans have in common. Though some technical proficiency is required, Sergio has to be trained to use a cellphone: how to communicate with the detective, what buttons to click and when. And he must memorize the face of Sonia, called in code the “target” of the investigation.

The motif is that a middle-aged woman whose mother is in a nursing home in Chile suspects that the older woman may be the subject of abuse, not an unusual idea since even some expensive assisted living dwellings involve unprofessional caretakers who take out their frustrations on the defenseless clients. Since some filming had been done at the home earlier, nobody need suspect that Sergio is not a new patient but a man hired to spy on them for three months. Since women live on average six years or more than men, Sergio is the talk of the elderly women from the time he arrives, particularly since he is gentlemanly, courteous, well dressed, ready to start conversations with any who might respond. All but one cranky woman express themselves.

The one problem they seem all to have is loneliness. Sure, they’re surrounded by women about their own age but these people are not their families. And as my mother used to tell me “Old people do not want to be surrounded by old people.” They long for visits from their sons and daughters, and one woman of about ninety years converses on the phone with her mother who is criticized for never visiting. (The home has one of its staff pretend to be the 125-year-old woman.)

It’s obvious that there would be no abuse in the nursing home when cameras are trained on the staff and their clients and, indeed, the place looks like it could be mistaken for a comfortable, albeit not luxurious retirement community. The floors shine, the rooms, except for one, are clean. The staff are ready to help is someone falls.

Sergio may have no favorites, certainly not the unfortunate two or three women who are completely bedridden, but he does listen to one woman’s poetry, though he is critical: his favorite poems rhyme and these do not. The strangest thing is that you may wonder why these women have to be in nursing homes at all, with the exception of a few who have Alzheimer’s and cannot remember having conversations with Sergio just hours earlier. They are not in wheelchairs, they do not watch TV or play bingo, so the documentary filmmaker can concentrate on the chats that Sergio has with several women.

Pablo Valdes films the proceedings in San Francisco, Chile, with almost all the action taking part within the building and in the surrounding grounds, where only the solitary cat seems happy to be alone all day, his time occupied by cleaning himself. Near the conclusion, a woman with a stroke is taken away in an ambulance, in a scene that reminds us that this is not narrative fiction. One critic notes that this is the most heartwarming spy movie of all time, and though I haven’t scene all in the genre, I’ll take his word for it. You may come away recalling the expression “Old age is bad but it beats the alternative,” but given the dreariness and sameness of the days here, you would not be blamed for challenging its veracity.

In Spanish with English subtitles.