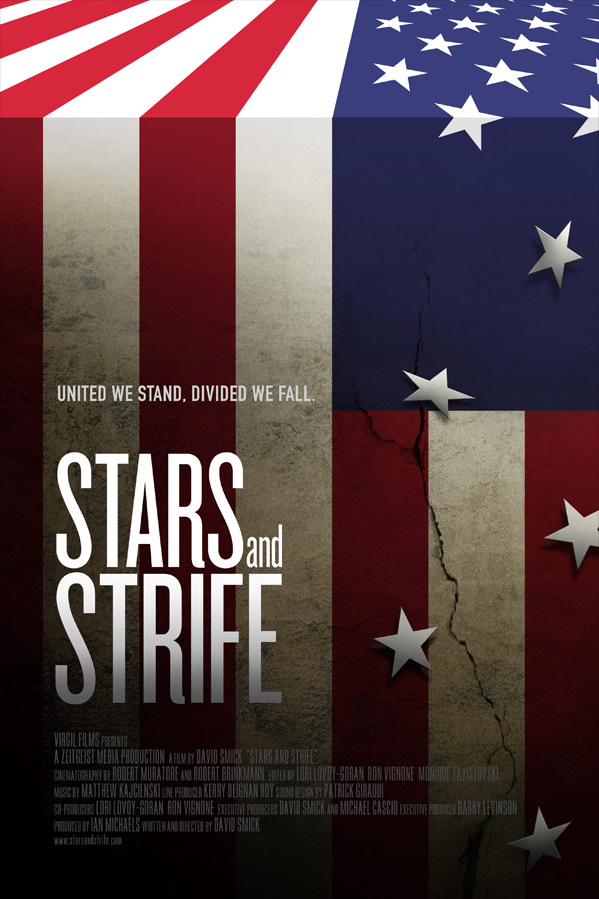 Are we Americans destined to have the Stars and Strife forever, or are we simply at a crossroads today when so many formerly in the majority middle are increasingly separating into hostile forces reminiscent of Civil War times? David Smick’s documentary feature puts together a rousing bunch of leaders in both politics and economics to debate the current state of the U.S. while at the same time setting forth their views on our political divisions. Some spokespersons—and there are quite a few—believe the problems of democracy center on class differences while others believe that differences of race and religion are big factors. All believe that we can get together as we thought we were during the post-war period of prosperity in the 1950s and a largely global belief that America was where it’s at—though this would obviously dismiss the segregation that persisted well after the Civil War right into the present.

Perhaps the best quote summing up the picture is the view that the opposite of hate is not love; it’s empathy. You’re not going to sing Kumbaya with people who do not see the world as you do, but listen listen listen. Implicit is the thought that what turned people in the rust belt, the rural areas, the blue-collar workers against the so-called elites in the coastal areas is that they have been looked upon by large segments of our people and politicians as hicks, racists, backward people living in flyover country. Democrats have lost many of these folks who believe that the party has been concentrating too much on ideas like gay rights, gay marriage, civil rights, all associated with identity politics, when they should have followed the wisdom of Franklin D. Roosevelt who, though a member of the aristocracy, won successive terms by showing regular people that he was on their side. (The FDR bit is not in the film, but a thought that came to me while watching a host of ideas sent out with the speed usually associated with blockbuster films.)

The most entertaining aspect of the picture is the use of animation and especially silent films starring Charlie Chaplin, Buster Keaton, Fatty Arbuckle and Harold Lloyd when the subject matter of each illuminated the issues in discussion. A lot of excellent editing by six film professionals kept the film moving ahead enjoyably. While twenty-four spokespersons introduced their pet ideas, President Trump is neither mentioned nor seen throughout, which is strange, since his actions are largely what informs the commentary.

Speakers who impressed me most include Hawk Newsome, President of Black Lives Matter of Greater New York, who in one stirring evocation of his civil rights plank actually led to his being hugged by two members who appeared to be of white supremacists’ ideology. To further that end, Derek Black, the Godson of Ku Klux Klan Grand Wizard David Duke, appears in various sections explaining his abandonment of white supremacy ideas, as though he had an epiphany in college. Some fellow students googled his name, deciding to have nothing to do with him when he was found out.

What causes hatred? One speaker noted that the resentment of Germans after World War I led to the most vicious authoritarianism and that similarly, there is resentment by the aforementioned blue-collar, working class people, who lost their promised careers when factories closed and work was sent overseas. Resentment leads to humiliation, which gives birth to anger and finally hate.

One way to curb extremism in politics involves putting aside the two-party system, which encourages extremism of both the left and the right to get votes, and to allow independents the chance to win local and national elections. Voters check off their preferences in order: 1,2,3,4. Say you have four candidates. If the first candidate does not get 50.1% of the vote, a clear majority, the person coming in fourth is eliminated and the remaining three may get a clear majority when second and third choices are utilized in the voting. (This is a fairly complex procedure that my group, New York Film Critics Online  uses, as in each category, we write up to three choices.)

Here’s a point not directly mentioned in the film but which I come away with. The speakers, like so many of us in the fifty states, would like to come together, some willing to compromise as was the case when Democrats and Republicans were still speaking to one another. But take abortion. Would the so-called pro-life people be willing to compromise and allow abortion on demand during the first trimester? And would the so-called pro-choice folks be willing to give up the possibility of banning second- and third-trimester procedures? And immigration. Would the forces on the right wing of the spectrum be willing to accept a substantial number of immigrants from, say, Central America? And would they be willing to give up all possibilities of buying AK-47 rifles and other assault weapons while the left ponders whether to allow guns in most civilian hands at all?

Because “Stars and Strife” is fast moving, the spokespeople not acting like the usual ponderous talking heads of so many docs, the film can surely be recommended to a general audience. While those of us who are “woke” are familiar with just about everything mentioned during the 97 minutes, many Americans follow politics the way I follow basketball, which is not at all. This is obviously a film more interested in compromise than the excellent “#Unfit: The Psychology of Donald Trump,” it may lack some of the rah-rah feelings that anti-Trump residents would come away with. But it’s fine as both a primer for those alienated from the fighting and an entertaining, informal piece for all.

The film is directed by David Smick, whose recent book The Great Equalizer: How Main Street Capitalism Can Create an Economy for Everyone warns of the dangers of the present subpar global economic growth rates.