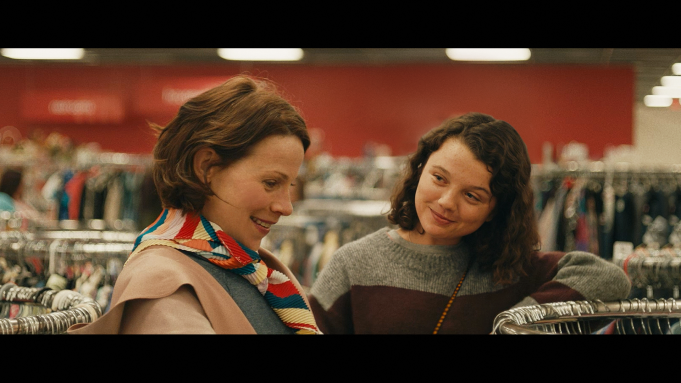 You do not often see a movie featuring the closeness that a mother and daughter can have for each other, which makes it all the more fortunate that Dawn (Lili Taylor), a middle-aged widow, might be helped to a semblance of emotional health by her daughter Melanie (Stefanía LaVie Owen). Bearing the possibility that “Paper Spiders” is semi-autobiographical, given the details cited by the husband-wife writing team of Natalie Shampanier and Inon Shampanier and directed by Inon Shampanier, “Paper Spiders” gives its audience the feel of what it’s like to be not schizophrenic, but almost hopelessly delusional (if that brings to mind anybody in the present U.S. government, you’ve been following politics).

You can almost swear that Owen and Taylor are an actual mother-daughter team; that’s how empathetic they are, and that’s how convincing albeit unwise that an eighteen-year-old girl might actually give up a full scholarship to a prestigious college and transfer to a local one to take care of her mom. There’s nothing fancy about the direction here; little of no animation, special effects, flashbacks, all the more bringing a sense a authenticity into the action which is at first comic, then spiraling into a more serious analysis of what it means to have a treateable, but uncurable, emotional condition.

Lacy’s paranoia would be comical if it were not pressing. She believes her neighbor is spying on her, throwing rocks at her house, stalking her; even at one turn when she develops a serious pain in her head, she is certain that he has a machine in his home that can mess with her mind. She is a constant embarrassment to her daughter; causing an uproar at her high school graduation that stops the proceedings, and earlier, during a tour of potential students, suggests that a library open to students even at 4 a.m. is flirting with danger, and by the way “What are the crime statistics of the college?”

For her part, Dawn possesses maturity in her sacrifices to help her delusional mother but enters movie coming-of-age territory when she learns, through Daniel (Ian Nelson), a persistent, handsome and rich boyfriend with a Beemer convertible, to drink beverages stronger than Virgin Mary and at about the same time to lose her virginity.

Comic interludes include meetings of the principal characters with Mr. Wessler (Michael Cyril Creighton), an awkward campus social counselor who relies on reading descriptions of mental illness right out of the DSM, the antics of a private investigator, Gary (Max Casella), and the frustrations of Lacy’s lawyer boss Bill Hoffman (David Rasche) who after six years finally gets the nerve to fire his paralegal.

If the writers and director are getting things right, we find out that paranoia does not come up to the surface at every moment, but relaxes enough to allow for unforced comic moments from the fine acting of Lily Taylor.