The slings and arrows of a gay relationship turn out to be not at all different from the same discords in straight couples. Two gay men with different backgrounds, Alessandro (Edoardo Leo), a muscular plumber, and Arturo (Stefano Accorsi), an academic translator, are on the verge of spliting. Being Italian, they are of course part of a large family, a group that knows how to celebrate, eating and drinking as though life were a European banquet. Like many comedies that begin with high spirits, “The Goddess of Fortune” will gradually and heartbreakingly face crises, affecting not only the two whose passions have long diminished, but two children, Martina (Sara Ciocca) and Sandro (Edoardo Brandi), as well. 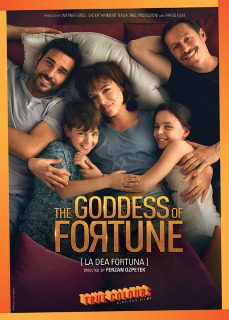 The dramedy is the work of Ferzan Ozpetek, whose “Naples in Veils” treats the existence of Adriana, whose life changes from a sudden love and a violent crime. In this current picture, Ozpetek hones in on Alessandro, furious that his partner has been involved with another boyfriend for two years, which gives the plumber enough reason to break up then and there. But family situations turn up to alter their heartbreaking plans, giving both a reason to stay together in caring for the children as well as they cared for and loved Annamaria (Jasmine Trinca). The warm and friendly Annamaria’s children are by different men. When she, burdened with migraines, gets a painful diagnosis from the hospital requiring a sensitive operation, she leaves the eleven-year-old girl and the nine-year-old boy (played superbly, by the way), with the men whom they love.

You will probably guess where the story is headed, given its predictable conclusion when the two middle-aged men, being too busy to take care of the young ones, put them up with a bitch of a grandmother (Barbara Alberti), a baroness with a huge chateau near Rome whose attitude toward gay men is the least of her problems. The principal one is the way she has treated her own daughter, and now follows suit with her two grandchildren. (That chateau, all of which is inhabited by only the grandmother and her loyal servant, was filmed near Palermo at the Seventeenth Century Villa Valguarnera.)

The picture includes good food, of course, even on the cheap ferry that takes the children and the two men from Sicily to the North. But the pleasures that Italians take seriously are threatened throughout most of the final segments of the movie by conflicts of the two men, one of whom gives Alessando the guilt trip “I could have been a professor,” while Alessandro knows how to make a mockery of his partner’s Trumpian whining.

“The Goddess of Fortune,” whose message is to closely stare at a partner, then close your eyes. You will remember him or her forever. In the same way, the film covers the emotions from joy to tragedy smoothly, making this almost a holiday movie given the happy and credible ending.