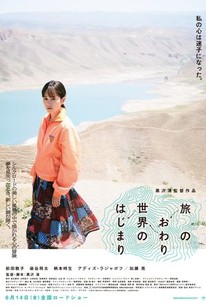 Atsuko Maeda, a 29-year-old Japanese pop star, once appeared in a horror film, “The Complex” ( Kuroyuri danchi). She goes home to find an empty apartment, becomes hysterical, and finds out later that her family had died in a bus accident. Ms. Maeda is also hysterical at times in her current piece, “To the Ends of the Earth,” but this is far from being a horror film. It’s the latest from Kiyoshi Kurosawa, whose “Cure” in 1997 is about a series of gruesome murders by people who have no idea what they had done, and the more recent “Tokyo Sonata” about a family that disintegrates after its patriarch loses his job.

As Yoko (Atsuko Maeda), the principal character is coming of age, not so much because she has just graduated from college or found a new boyfriend, but because she, like most of us, works at a job that she’s “too good for” (she’s an actress being filmed in a travelogue for Japanese TV). She wants to be singer. She gets an audition in front of us, her movie audience, by twice singing “If You Loved Me (Really Loved Me)” but with invented Japanese lyrics. In the Japanese version which, like the American, notes that all you need is love, she gently and to an invisible orchestra pledges that for her man, she would give up her job, dump all her friends and family, sell out her country. In fact she would go “to the ends of the earth” to be with this lucky guy.

The film is part travelogue and part an exploration of a vulnerable woman traveling with a small film crew including one chap who is fluent in both Uzbek and Japanese. The crew are regularly worried that the views of Tashkent and the outside of Uzbekistan are not what interests their viewers, so there are lots of cuts. Easily the most unfortunate of these cuts shows Yoko riding a two-bit machine that almost as tacky as what you’d find in Coney Island, one that spins her around, knocks her upside down, and results in her throwing up into a plastic bag. And she does this three times! She probably would not mind going back to the beginning of the story and pretend that she likes a dish of uncooked rice offered by a woman and has to lie about how delicious it is.

She goes off on her own at one point to check out Tashkent’s nooks and crannies, and all eyes are on her. The men stare as though they had never seen anyone but an Uzbeki. Everyone on the bus stares. The police stare and even arrest her because she is using a camera to photograph an off-limits area.

She inhabits the feeling of many a person who is not a tourist but a traveler, going off without a group or a guide or an interpreter, speaking not a word of the local language, though with halting English. She rides a bus and has no idea where to get off. The two tourist places she inhabits after looking into the grime and back alleys in the fringe areas of the capital are the humongous Hotel Uzbekistan ($75 a room in May and you get over 10,000 soms for your US. Dollar), and the nearby Navoi Opera House. In that last destination she fantasies herself as a singer, with a full orchestra, letting us know once again that she would sell out her country, family and friends if she found the right guy. It’s a beautiful song, not belted out as would Brenda Lee, Maura O Connell or Jeff Buckley but with the grace and charm of a singer who takes the words genuinely to heart. These are the most effective moments, designed to bring a joyful tear or two to the eyes of a sensitive audience member like me.

Kurosawa punctuates the mixed feelings of global tourism. On the one hand there’s the experience of being in a country in which you don’t know the language and can tear your hair out in frustration with the loneliness of an innocent abroad. On the other hand there is the exhilaration of a new experience, a breaking away from the nine to five job, the TV channel-surfing, the dependence on the i-phone, the same ‘ol same ‘ol. Ultimately this is a lovely movie highlighting the adorability and acting chops of a petite, slim, Japanese woman who has apparently captured the affection of an endeared Japanese public.

In Japanese and Uzbeki with English subtitles.