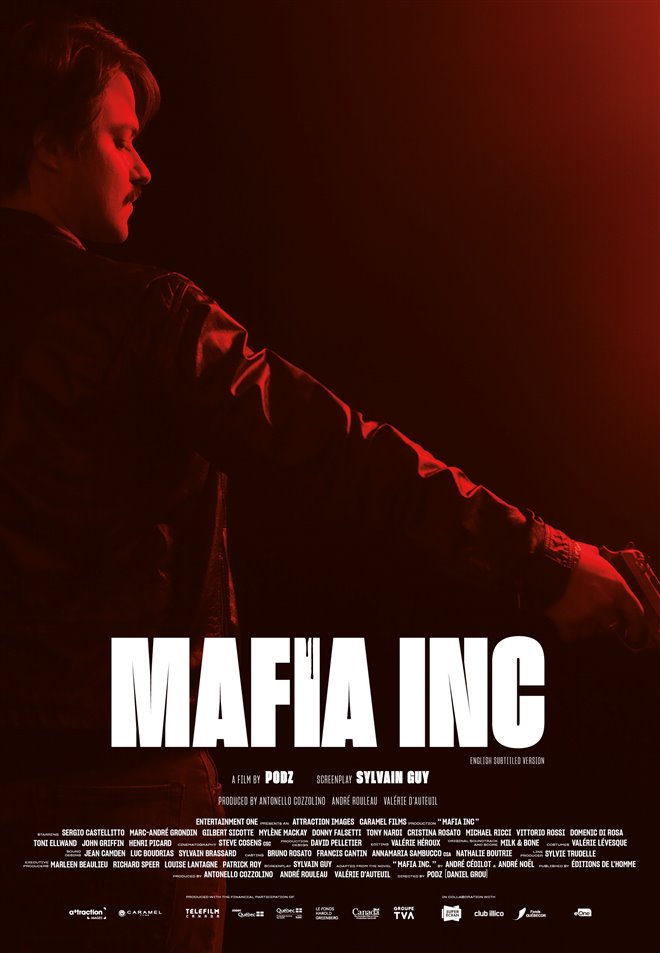 Names of countries and provinces are flying here as though the actors are playing a game of geography. Lugano, Switzerland, Italy, Sicily, Lichtenstein, Venezuela, Quebec, Canada, Montreal, Cayman Islands. All of these areas (even Venezuela in better times) accommodate people who want to launder money, to hide deposits from the authorities. It’s a wonder that mafia members ever get caught, but Daniel Grou’s “Mafia Inc” shows what many of us in the audience know. Fallings out within gangster families in addition to wars between rival gangs lead to actions, reactions, and these guys don’t fool around. They get revenge when somebody squeals to the cops, when others are found to wear wires to lessen their sentences, and in the case of this movie, when one commits a crime so horrible that even his fellow members ostracize him.

The Quebecois director Daniel Grou, whose “Miraculum” is an ensemble work about people exploring their passions, deals now with people at least equally passionate, though a subplot around a controversial romance is thrown in to complicate a story that, like “Miraculum” is an ensemble piece. There are many characters with so many conflicting emotions and desires that a second showing may be needed to assemble the puzzle.

The two principals are Frank Paternò (Sergio Castellitto), the godfather of an ethnically Italian clan living in Montreal, and Vince Gamache (Marc-André Grondin), a young member committed to violent actions meant not only to earn great sums of money (by hiding drugs inside corpses with removed organs and smuggling them through customers), but also to impress Frank. The film is based on a true story uncovered by Canada’s Woodward and Bernstein-like journalists André Cédilot and André Noël. The action takes place in Montreal in 1994 with flashbacks to 1980 to show the lives of upcoming mafioso Vince.

The godfather is played by a smartly-dressed, articulate, person who you might think is the CEO of Italian airlines and whose idea of making money is not by Bonnie-and-Clyde bank heists but by getting involved in a proposed bridge between Sicily and Italian mainland. You would not be surprised to see that the smooth-talker is proud of his anticipated construction as he frequently refers to his roots in the “motherland.” What will eventually take down the scheme is that Frank’s son Giaco (Donny Falsetti) is the man he wants as his successor, and ambitions of rival Vince, who is the son of a tailor (Gilbert Sicotte) known for custom-dressing the Paternò clan.

These are not a pleasant ensemble of people but Vince, a firebrand on his way up, believes more than the others that the end justifies the means. His is the idea of crashing a school bus in Venezuela sacrificing children to pick up bodies to transport drugs through customs. The romance between Giaco’s brother Pat (Michaela Ricci) and Vince’s sister Sofie (Mylène) adds complexity to the story, which features large groups of people in ornate houses and reception halls, a concrete sign of the millions sent by the families to banks around the world.

As in “The Godfather,” which is probably the best known classic film on the subject atop a slew of others like “Once Upon a Time in America,” (an almost four-hour look at a Jewish prohibition gangster coming to terms with his life), “Eastern Promises” (a Russian crime family), and “Scarface” (a Cuban immigrant in Miami takes over a drug cartel). If we are to believe the two journalists who covered the Quebec-based mob, their story involves everything you expect in an action drama, including the blowing up a custom men’s wear shop with a pipe bomb, shootouts that make “High Noon” appear like a child’s game of tiddle-de-winks, dancing by ornately dressed couples in the most gaudy reception rooms, and the like.

What is different here is that the gangsters easily adapt their perfectly accented speech among Quebec French, English and Italian. The film also shows what’s left of the mafioso humanity: they may cry when family members wind up dead and they are sentimental about budding romances among the clan. “Sicko,” one of Michael Moore’s documentaries, purports to show how civilized Canada is when compared to the U.S. Some of us here in America have fantasies that the Canadians, with their seeming cooperation among political parties and normal prime ministers, must be an idyllic place to live. “Mafia Inc” however points out the flaws within the boundaries of our neighbors to the north and does a more than adequate job albeit with some confusion.

In French (or should we say “French”), Italian, and English with English subtitles where necessary.