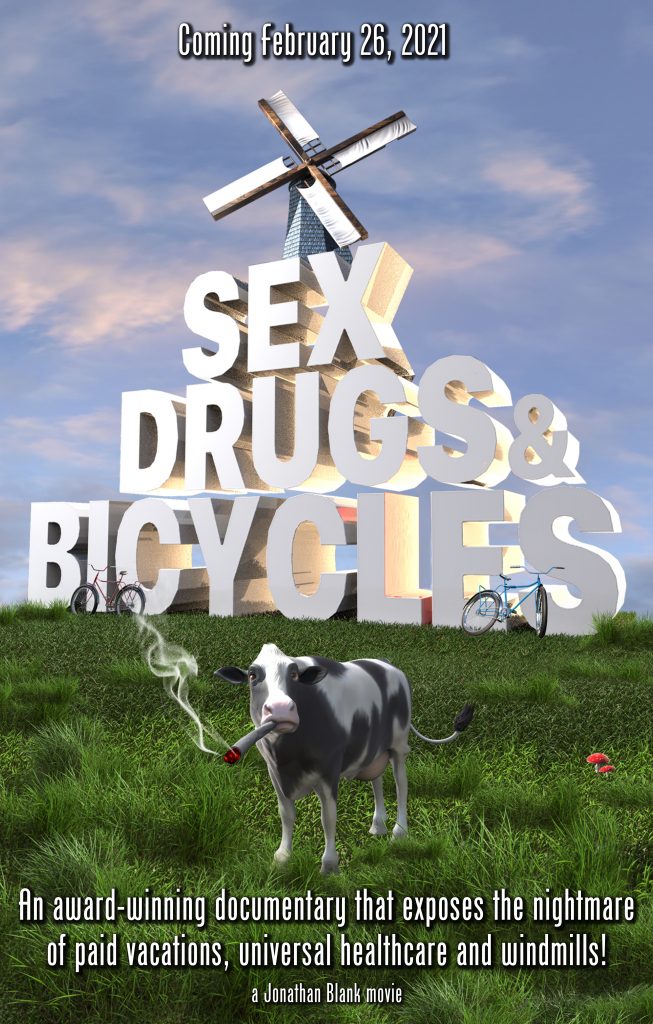 “Sex, Drugs & Bicycles” really is about sex, drugs and bicycles with the implication throughout the documentary that the more you have of each, the happier you will be.

Considering the high taxes of countries with Holland’s social welfare programs and policies, you might be surprised to find out that in their lust for life, the Netherlands joins the equally social democratic countries of Scandinavia. This might seem surprising to people here in the U.S., often called the world’s richest country (as though that leads to happiness as does the night the day), but the view of our Republican politicians and the moderate Democrats who sometimes resemble them is that socialism is the monster you found under your bed when you were six years old.

Directed, written, edited and whatever by Jonathan Blank, whose sense of humor is most like that of Michael Moore, this doc moves forward like a stiff dose of amphetamines with a love for Holland that might make you think that Blank is high on Ecstasy. As for the multiple organisms and the ease of finding partners to achieve same, who’s got the time to worry about the headaches of owning cars when bicycles are the favored mode of travel and the most serious crime that Blank finds in his favorite nation-state is that the two-wheelers often get stolen. Since there are more bikes than people—which means there are more than seventeen million of ‘em—who has the need to add another to their stable?

With snappy and often hilarious animation where Blank morphs into Rembrandt, “Sex, Drugs & Bicycles” lauds, among other things, the four+ weeks of holiday that the Dutch are required to take, even getting paid for their extra month off. And unfortunately for us cinephiles, director Blank seems to have taken far more time off than that. His previous picture, “Anarchy TV,” which features teens doing nude television on the station that they capture, was released twenty-two years ago. It’s therefore not at all puzzling that Blank includes an annual naked bicycling day as one of the great things going for the Dutch.

And how can they pay attention to the windmills, which are the most notable symbol of the Netherlands, when there’s so much sex to concentrate on? Every traveler knows about the sex shops where sex workers, fully legal and licensed, get to parade their wares on storefronts in the tourist-heavy neighborhood that is the main attraction. Not only that. Kids get sex education beginning in primary school, and perhaps as a result, the Dutch abortion rate is much lower than that in our country.

As for medical care, it’s not free but it’s mandatory. Basic coverage is required and 99% are insured. Insurance is sold by private companies, and you can kick in extra cash to get more than the usual services. Even in the land of windmills, there’s no such thing as a free lunch. Marijuana can be sold in legal neighborhood coffee shops, such as the one on display named “Smokes.” Teens also take drugs on TV, though Blank briefly mentions that Holland had a problem with legalize hard drugs and pushed back somewhat against it.

Bernie Sanders might be considered a “moderate” by Holland’s standards. Does Bernie believe that transgender surgery should be covered by the government health plan as do the Nederlanders? How about sex workers making the disabled happy? Holland is in the forefront of LGBTQ equality, so there’s none of the fanfare such as here when Barack Obama had to say that he’s “evolved” on his position regarding gay marriage and LGBTQ protections.

Blank takes little time reviewing what’s bad, though he does point out that the liberal policy on accepting Muslim refugees has brought right-wing politicians out of the woodwork. The press notes state “Is having month-long double-paid vacations, no fear of homelessness and universal healthcare the nightmare we’ve been warned about?” More a wet dream than a nightmare, though Holland has an increasing problem of homelessness. According to the Wikipedia article “Netherlands and Homelessness,” in 2018 there were 39,000 without roofs over their heads, afflicting mostly Muslim refugees.

As you might expect, Holland’s seventeen million people would be lost if traveling outside their borders if Dutch were their only language. Everybody interviewed in this doc spoke perfect English. So…if you’re a Michael Moore fan and you had not heard of Jonathan Blank before (as stated, he had no released a film for twenty-two years), you are likely to enjoy this movie’s eight-five minutes and get depressed when you realize that the U.S. ranks so low in the developed world in education, affordable health care (though Medicare is fantastic making it great to be old), and harbors a puritanical fear of recreational drugs.