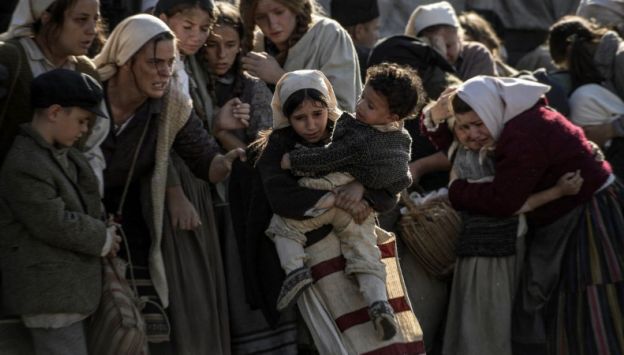 Some astute filmgoers might dismiss “Dara of Jasenovac” as a course in Holocaust 101, a film that might have been designed primarily for the forty percent of Americans who never heard of the Holocaust and a few others who might be admirers of the Nazi extermination camps as shown in the attempted coup at our national capitol. However, Predrag Antonijevic’s film is unique in its coverage of the concentration camps of the independent state of Croatia, a country created by the ultra-nationalistic, racist, xenophobic, anti-Semitic, anti-Roma, anti-Serb Ustashe.
Director Antonijevic, born in Nis, Serbia, Yugoslavia in 1959, whose “Breaking at the Edge” is a horror film about a woman whose unborn child could be killed were she not to avenge a supernatural entity, now takes on a far greater horror rather than one affecting just a single person. And this one is based however sadly on true events. In doing so, he personalizes the story by focusing partly on Dara (Bilijana Cekic) in her debut performance as a ten-year-old, determined not only to survive the terror of a concentration camp but to stick by her infant brother Bude Ilic come hell or high water.

And hell could hardly be more horrific than the large concentration camp of Jasenovac, the only camp set up independent of German control during the war, though a German adviser or two may visit the premises to advise the Ustashe commanders. When one German wonders why the Ustashe do not concentrate on “just Jews and Roma,” he is told that the others are imprisoned there simply because “they are Serbs.” So these Ustashe s.o.b’s are into all the accoutrements of Nazi ideology, in this case that the purity of Croatian blood must be preserved against the alleged manipulations of others who supposedly run the gamut from having exclusive control of the media to being sub-humans sucking the pure blood of the Croatian people.

One may well imagine that Natasa Drakulic, who scripted the story, aims to show that the Jasenovic camp was even more brutal than Auschwitz since the inmates were not only worked to death but killed gleefully by the commanders—who include women who are no less sadistic than the men. Examples abound. During a game of musicals chairs, to which the Serb inmate musicians are directed to knock out a Serb folk song, the commandant would raise his hands to stop the music. The prisoner who is left without a chair is killed. Then two chairs are taken away—fun and games. The two unfortunate people are stabbed in the neck as well. Finally, all the “winners” become losers, gunned down as though the Croatian officers are playing a video game.

Another method of killing involves shooting anyone who tries to escape, running toward a river that would take a prisoner to safety. A bunch of children are taken to a basement while the Croatian hurls a can of poisonous gas. Kapos help out, just as they did in the German-led camps, keeping lists of names and turning select people over.
While this is going on, the ten-year-old Dara must learn to be strong. She is as determined to protect her young brother as she is to stay alive, prepared to give her own life is needed to ensure the safety of the boy.

The activities by the prisoners in running the camp like a farm by grinding the corn, feeding the pigs, looks more like make-work before the killings, the entire film hitting you with the dangers of ultra-nationalism, the kind of ideology that enjoyed a bit of a run of the previous administration and featured the invasion of our nation’s capitol, with the ensuing risk to the lawmakers of being taken hostage or killed. Credit must be given to the cast of non-professional actors from whom director Peter “Gaga” Antonijevic evokes skillful performances. “Dara of Jasenovac is filmed by Milos Kodemo in the villages of Kolut and Bela Crkva, Serbia.

In Serbo-Croatian with English subtitles.