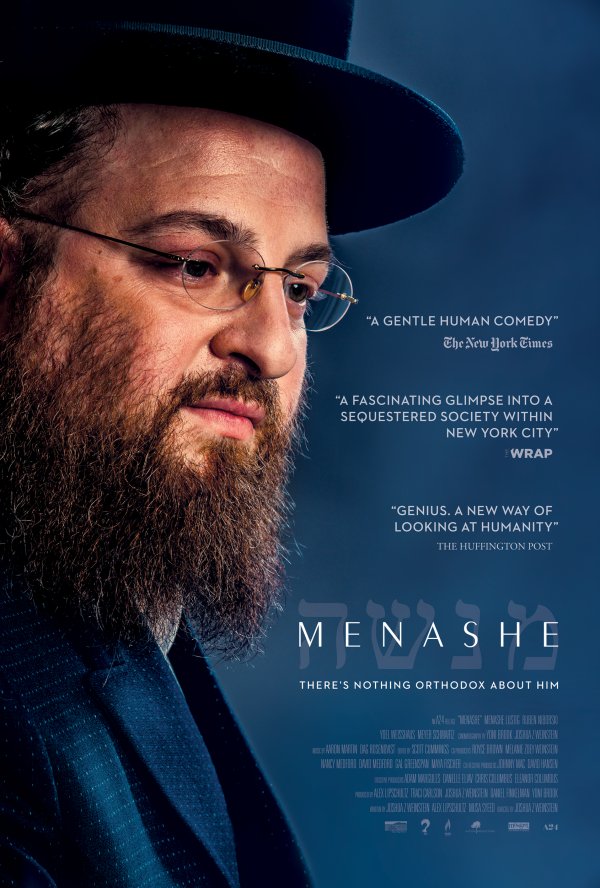 When Rabbi Menachem Schneerson died in 1994, people asked me whether I had gone to his funeral.  Schneerson, whom some in his Hasidic sect believed to be the Messiah, was responsible for reviving the Chabad Lubavitch movement and is considered to be one of the 20th century’s great thinkers.  But I have more in common with the Pope than with Rebbe Schneerson, because Jews are far from a monolithic tribe.  If you want to know some of the differences among Jews, consider this dialogue:

But even among orthodox Jews, there are Hasidim, the folks who wear black coats, large hats, and significant beards and those who are not at all Hasidic.  Joshua Z. Weinstein’s film “Menasche,” focuses on the Hasidic community of Borough Park, Brooklyn, people who are generally insular, a difficult society for outsiders to penetrate.  Weinstein employs some secretive measures in filming his narrative, using mostly non-professional actors who are part of the community with a title character who is a web comedian.  And Weinstein himself is a secular Jew who did not know Yiddish, who needed someone to translate the script that he wrote with Alex Lipschulz and Musa Syeed.   Moreover many of the people he interviewed for the cast had never seen a movie!  This is one of the few films spoken entirely in Yiddish during the past seventy years.  As if this is not all that makes “Menashe” a go-to film for people who want to learn more about the sect, the performances come across as haimish (homey), warm, familial, and without condescension—though mixed in with the soulfulness are ample grounds for criticism of the Hasidic customs.

Thematically, the title character is faced with a situation that places his own views in conflict with those of his people.  Menashe (Menashe Lustig) has an adorable and playful son Rieven (Ruben Niborski) of about the age of ten who would like to live with his father, but is compelled to follow the rules of the community and its rabbi.  Because Menashe’s wife Lea had died months earlier, his brother-in-law Eizik (Yoel Weisshaus) has taken in the boy, since the rabbi ruled that a youngster should not be raised in a household without a mother.  And Menashe is not eager to take just anyone the matchmaker suggests, though he is reminded that the Torah, i.e. Genesis 2:18,  states that “man should not be alone, so I have created a companion.”  He works in a mundane job in a kosher supermarket, owes people money, is dissed often by his boss.  Yet the rabbi rules that during the week before a memorial dinner for Lea, Menashe can take the boy under his roof.

Menashe is determined to prove that he has the capacity to be independent and keep the child he loves in his own apartment.  While we in the theater audience await with bated breath the outcome of Menashe’s project, we enjoy a fly-on-the-wall look at the customs of this ultra-orthodox sect in Brooklyn’s borough park, one of the largest communities of Hasidim outside Israel.  There is much to be said for their insularity.  The whole neighborhood looks like one family, a happy one with the usual problems, people who can be counted on to help their fellow “members of the tribe.”  While people who are not Hasidic or even Jewish might think these bearded folks in their long black coats are regularly preparing to go to funerals, the reality is there is much joy among them.  In one scene they sing, pound the table, and drink too much wine while celebrating.   We may have diverse views on Menashe’s brother-in-law, some thinking of him as pushing dad out of the picture, even out of the polite community while others consider him as one who can offer the boy more, both materially and with the stability of regular family life.

“Menashe,” is loosely based on the title figure’s own experiences, a penetrating look at this community, many of whom had never seen a movie (their smart-phones have blocked Internet access).  Director Weinstein evokes terrific ensemble performances from the mostly amateur actors, giving the audience the chance to cheer Menashe on.  Will his kugel (noodle pudding) be acceptable to the invited guests at the memorial dinner?  Will he remain stubbornly independent and refuse to take a wife?  Do we want him to be independent, or do we hope that he will be among the very few who have left the Hasidic community completely, as did Deborah Feldman, who wrote “Unorthodox: The Scandalous Rejection of my Hasidic Roots” and whose tone is critical of everything the community stands for?  The conclusion is open-ended: this is no typical Hollywood ending where loose ends are tied.  But we know that Menashe is going to do everything he can to win back the favor of brother-in-law, supermarket boss, rabbi and others, and we inevitably root for his renaissance.