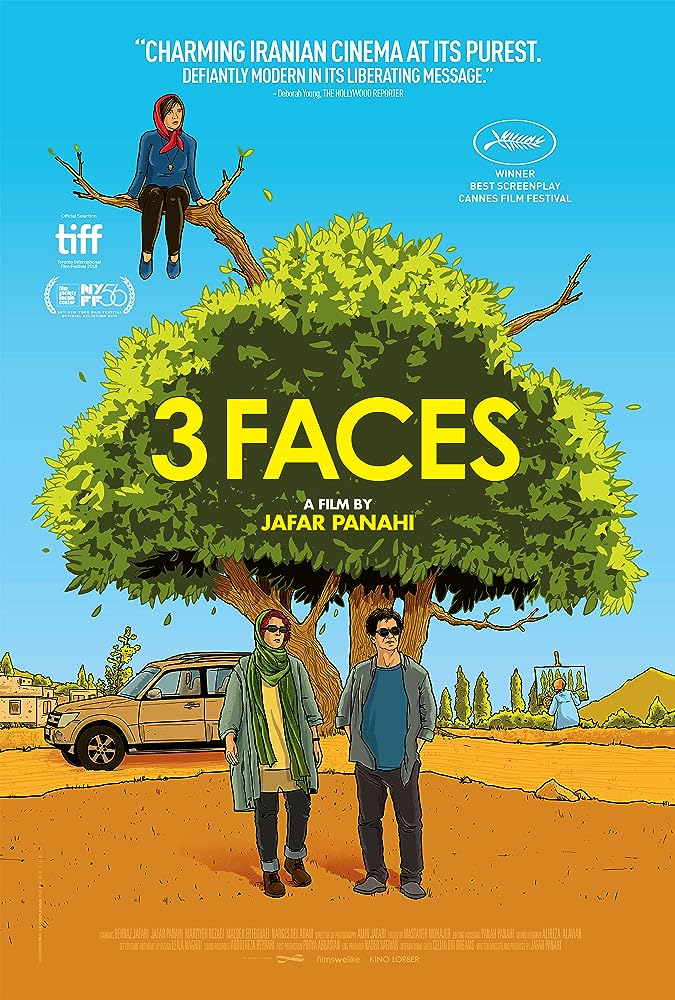 In March 2010 Jafar Panahi, among the best-known of Iranian film directors, was arrested, sentenced to a six-year jail term , spending much of that time under house arrest and forbidden to leave Iran. He was accused of making propaganda films against the Iranian government. While awaiting the result of an appeal, he made This Is Not a Film (2011), a documentary feature in the form of a video diary in spite of the legal ramifications of his arrest. It was smuggled out of Iran in a flash drive hidden inside a cake and shown at the 2011 Cannes Film Festival.

That act of smuggling is what could pass, justifiably, for excitement even here in the U.S., a sort of incident that patrons of commercial movies might line up to see. Nothing of this sort occurs in “3 Faces,” the title characters being one aging actress who performed before Iran’s 1979 revolution, one who is famous today, another being a young woman accepted to a conservatory who dreams of being in the movies. Panahi’s latest offering is a road-and-buddy movie using the genre’s tropes: a couple of friends who travel outside their neighborhood to observe the customs of folks from a less sophisticated walk of life. When Panahi travels from Tehran to a rural village in the Northwest of his country with actress Behnaz Jafari in the passenger’s seat, he entertains us with the odd folks you’ll probably find in the sticks anywhere. They are a friendly people who throughout the village invite them to tea, but under the surface is a hostility to women, sometimes shows vividly, and at other times with passive aggression.

This is not to say that Iranian women are like those of their gender in Afghanistan and Saudi Arabia. They do not have to cover themselves head to toe and get whipped if they show so much as an ankle. They do wear hijabs, or coverings, on their heads but can push the scarfs back to expose some hair. (This would not be so objectionable if men were also required to cover themselves. Wouldn’t people with the uncovered looks of Brad Pitt get the women all hot and bothered ?)

Performers use their own names as though this were a fly-on-the-wall documentary. The movie gets off to a vivid opening when Marziyeh (Marziheh Rezaei), a woman of about eighteen, makes a video of her suicide, tying a rope around her neck, the other end fastened to a tree. She sends the video to Jafar Panahi who shows it to Behnaz Jafari, who becomes obsessed with what she considers the injustice: the young woman’s parents will not allow her to attend a school for acting. Women who “perform” are said to dishonor the family, at least in this rural area where Turkish and Azeri become the dominant languages of the people. (I won’t bother to say obvious things about the millions of Americans living predominantly in rural and suburban areas of red states.)

As the director and the celebrated actress negotiate the unpaved roads in areas where many people had probably never seen Tehran, they take note of oddities. An elderly woman relaxes in a grave that she has dug, keeping the snakes away because the reptiles will punish her for her bad deeds. An old man soon after instructs Panahi to honk his horn once, then twice, seemingly a compulsion but in fact having a rational purpose. Toward the conclusion, another resident hands Jafari a foreskin of her infant to serve as a talisman. And a bull with “golden balls” that has practiced his stud service in a single night on ten cows lies in the road with a broken leg, its owner determined not to put the animal out of his misery because the animal makes a living for him.

There is virtually no music in the soundtrack. Panahi respects his audience enough to take many a long shot, all filmed expertly by Amin Jafari’s use of handheld cameras. Of course the young woman’s “suicide” is faked, designed to get the famous actress to visit and to talk the girl’s parents into allowing her to “perform.” In this film the acting profession is used to symbolize the patriarchy of the country, strongest of course, in the sticks. The three faces of the title include Shahrazade, who does not appear, having performed before the 1979 revolution and now living alone and miserable. While Behnaz Jafari has had success in her profession and is treated with excitement by the teen girls in the village who crowd around her, she is not all that welcomed by the oldsters. We wonder whether the third and youngest face will be able to compete for the success of Mrs. Jafari. “3 Faces” demonstrates the solidarity of women, all the more pronounced when it is repressed, a compassionate look at what some would call the “real people” of their country, all the more moving because of the film’s meditative nature.