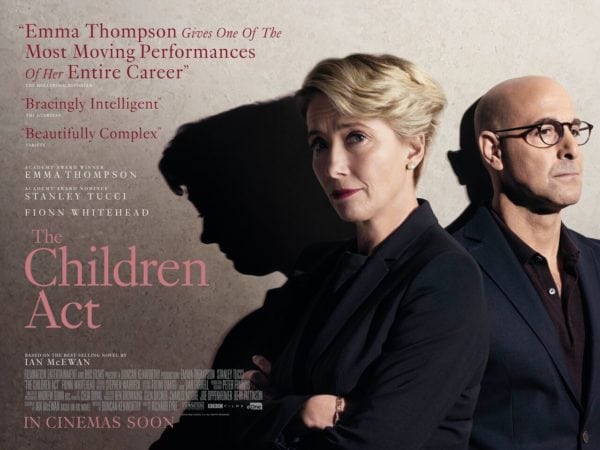 Richard Eyre’s film, “The Children Act,” can be used as a primer against the stupidity of fundamentalist religions of all stripes.  But Ian McEwan, who adapted his novel for the screen, has other important issues in his mind.  McEwan (whose novel is available on Amazon for eleven bucks) digs into the character of the woman who is at the center of the story in the book and even more so in the movie.  Fiona Maye (Emma Thompson), a judge on a high court in London which deals exclusively with family cases, involves herself in one particular case which, though revolving around a hospital’s needed permission to save a 17-year-old’s life, affects her so emotionally that she takes dramatic steps before rendering a decision. She is led to question her own life’s choices and forced to deal with regrets about her own choices.  “The Children Act,” then, may be have a strong judicial component that puts it in the class of movies like Xavier Legrand’s “Custody” (a broken marriage leads to a custody battle with an 11-year-old in its center).  Primary focus, though, is on the private life of an eminent jurist who is also an accomplished pianist called upon to give concerts to other important people in the judicial field.

In a subplot that adds to Maye’s emotions and will lead her to a crisis and the early stages of a breakdown, she must deal with the protestations of her husband Jack (Stanley Tucci), a professor of philosophy, who is fed up with what he considers his wife’s unavailability for weekend socializing.  There’s more.  He challenges her to name the date that they last had intimacies, noting that they do not even kiss anymore.  While these justifiable complaints do not change the course of their declining marriage, they increase the helplessness she feels when she delves into the case of Adam (Fionn Whitehead) a 17-year-old boy just months away from becoming an adult with the right to make independent decisions.

On her courtroom docket, parents of the Jehovah’s Witnesses faith claim the right to make their religion felt in the treatment of their son Adam, ill with leukemia, who needs a blood transfusion to have any hope of living without serious physical handicaps or even of pulling through at all.  Deciding to see the boy herself, she visits the hospital room and listens as young Adam repeats his parents’ objections, stating that he is willing to die rather than violate a principle of Jehovah’s Witness, though that faith did not decide against blood transfusions until 1945.  The basis in the Bible is from  Genesis 9:4 “You shall not eat flesh with its life, that is, its blood; and Leviticus 17:10 “If anyone of the house of Israel or of the aliens who reside among them eats any blood I will set my face against that person…”  Maye believes that the lad has been brainwashed, is unable to convince him to agree to the transfusion, and goes back to court to deliver her judgment.

The heart of the film is Maye’ emotional connection to this intelligent, pious young man, who becomes the son that she never had.  When Adam, now recovered, visits the judge without an invitation, that is, stalking her, her life from that point is at a crossroad.

We may be tempted to say that Richard Eyre, who is Thompson’s godfather, deserves full credit for evoking a stunning performance from Emma Thompson.  After all, his filmmaking includes “Notes on a Scandal” (a disliked veteran high school teacher appears to befriend a younger one who is having an affair with a 15-year-old student, but the good wishes are just a pose) and “Iris” (a lifelong romance of novelist Iris Murdoch and her husband as she fights Alzheimer’s).  Thompson, who appears in virtually every scene making this perhaps the crowning achievement of her career, makes things easy for the director.  Her status climbed after her separation from Kenneth Branagh.  The Oscar-winning actress has played roles of mostly reticent people in prestige films like “The Remains of the Day” and “Sense and Sensibility.”  According to some, like journalist Sarah Sands, Thompson has “grown with age and experience.”  The 59-year-old performer’s name is often used together with others cast in “heritage” productions, like Helena Bonham Carter, Judi Dench and Kate Winslet, nor can anyone deny that she is among the best actresses of her generation.  “The Children Act” is a perfect vehicle to see her in this classic role at her best.