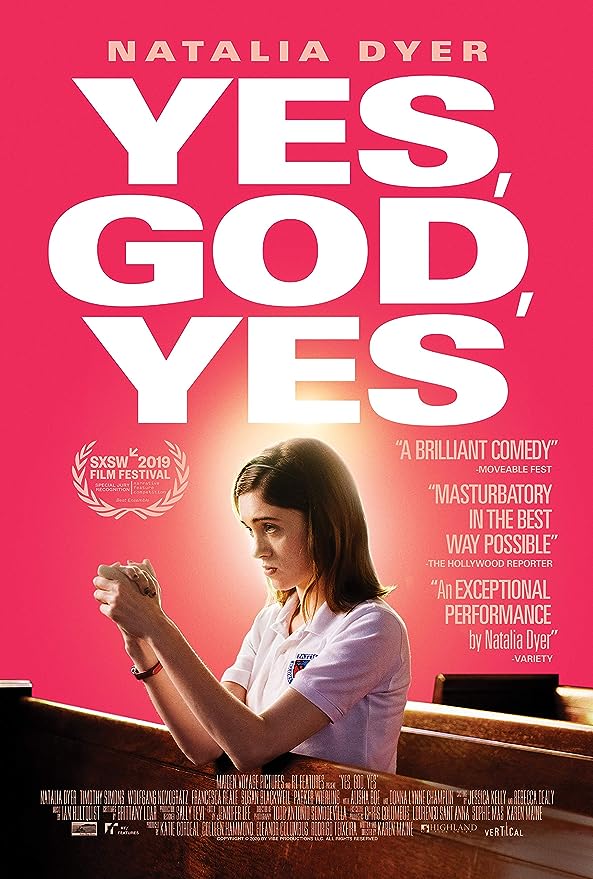 You may leave this film, a rigorous drama embellished with Catholic ritual, with a thought.

When Daniel (Bartosz Bielenia) is about to leave juvenile detention in a small Polish community, he tells the institution’s priest, Father Tomasz (Lukasz Simlatl), that he wants to work in a seminary. Daniel might be considered teacher’s pet by his youthful fellow convicts who spend their time training to work in a sawmill. He is the one called upon by the priest to add to the devotionals, sings the 23rd Psalm without a trace of self-consciousness or embarrassment, and thinks rightly that he could minister to a small town congregation. But Tomasz cautions that with his record, no seminary would take him on. What’s puzzling is: why is it so difficult for an ex-convict, anywhere, any country, to be trusted with a responsible job, even one that is not known for having cash around?

Daniel eschews working in a sawmill and takes a bus to a distant community where he becomes a fake priest. He convinces the vicar (Zdzislaw Wardejn) that he has been recently ordained in Warsaw, whips out a clerical collar with which he absconded, and is asked by the vicar to take his place for a while as he goes off to take care of health problems.

The dark, intense, absorbing and surprisingly credible tale of revenge and redemption is directed by Jan Komasa, whose “Warsaw 44” is a tale of the uprising against the Nazis, with a story line that features love, friendly and adventure. “Corpus Christi” is a more intimate story which benefits greatly from Bielenia’s stunning performance as twenty-year-old who may be faking his credentials but is the real thing otherwise; a fellow whose ministrations to his small-town flock leads to record numbers at services including absolute trust in him as parishioners go to confession.

Aside from the principal action in which we in the audience may suspect that a reckoning, there is a secondary plot. A middle-aged man had crashed his car into a vehicle holding six youths, killing all. The vicar, with the support of the community including the sacristy caretaker Lidia (Aleksandra Konieczna), refuses to bury the man. Daniel goes against the opinion of everyone except the widow (Barbara Kurzaj) of the “murderer” and the caretaker’s daughter, Marta (Elilza Rycembel), who is sexually attracted to the priest. He bucks even the town mayor and leading employer (Leszek Lichota) who wants the planned burial to just go away, Daniel must face a crossroads when inevitably, people back at “juvie” discover the fraud.

If this were a documentary or a “Christian” feature, the moral would be: give former convicts a chance a redemption. As a drama, the same noble message would come across, but more importantly, “Corpus Christi,” with its powerful performance by a 28-year-old with a passionate gaze, will serve as a dramatized sermon that few actual religious leaders can regularly match.

The movie is in Polish with English subtitles and benefits hugely by the absence of music in the soundtrack. “Corpus Christi” was the Polish entry for the 2020 Academy Awards for International Feature.

POPE FRANCIS: A MAN OF HIS WORD As an occasionally lapsed member of PETA, I have a favorite saint, which of course would be St. Francis.  He once had birds surround him, intrigued by the power of his voice.  As he preached, not one of them flew away. He is often portrayed with a bird, typically in his hand. Even more sensational, in the city of Gubbio, where Francis lived for some time, was a wolf “terrifying and ferocious, who devoured men as well as animals.” Francis had compassion upon the townsfolk, and so he went up into the hills to find the wolf. Soon, fear of the animal had caused all his companions to flee, though Francis pressed on. When he found the wolf, he made the sign of the cross and commanded the wolf to come to him and hurt no one. Miraculously the wolf closed his jaws and lay down at Francis’ feet, at which time he lectured the animal, warning him to stop devouring the aforementioned men and animals.

Given my affection for the man who did his good deeds during the first half of the 13th Century, I’m surprised that no other pope beginning with the first one, St. Peter, took his name, though a few were members of the Franciscan order.  What impressed the current holder of the office most is arguably his medieval namesake’s embrace of poverty.  Though the son of a rich silk merchant whose father gave him (if you’ll allow) hell for hand alms to the poor, he redeemed himself from the sinful life of the haute bourgeoisie by giving himself to a life of poverty.  For his part, Pope Francis eschewed living in luxury, instead resting his head in a small apartment near the Vatican—at least when he is not traveling outside Argentina to places like Bangui in the Central African Republic and the favelas of Rio, where somehow the residents are not especially pleased with their own penurious condition.  The Cariocas on display in this documentary do not consider picking up food and clothes dropped by the neighborhood dumpster to be an act of holiness, and would probably give up their chance to go through the eye of a needle if by consolation they could dine on oysters at Marius Degustare’s place at Avenida Atlantica 290.

Wim Wenders, whose best work in my view is the mystical “Wings of Desire,” spends much of his time listening to Pope Francis one-on-one, where the Pontiff elucidates his philosophy without the buzz of the tens of thousands of people he gathers whenever he visits a foreign country, blesses the crowd at the Vatican, or entrances the multitude in his own Buenos Aires.  He is called a charismatic man, but would surely not be classified with JFK or Churchill as a rousing speaker.  Rather, his charisma, his hold on vast numbers of Catholics and other too, comes from the fact that, well, he does hold the highest office in the Church and receives a pope’s share of publicity.

What are his views?  Principally, though he extols his 13th Century namesake for choosing poverty, and is angry at the world’s inequality, wherein 20% of the global population holds 80% of its wealth.  (Even more dramatic statistics come out of the U.S.)

Also he wants governments to build bridges, not walls, wants people to stop ruining their mental health by getting off the accelerator because “we’re not machines,” and praises Judaism for founding the Shabbat when no work is done.  Gays? He tells people on a special flight that “Who am I to judge?”and wants couples whose arguments sometimes lead to “plates flying” (which draws a big laugh from the audience though if you or I said this there would be stony silence), to make peace before bedtime.  Unlike U.S. politicians who preach to the middle class but act to enrich the upper classes, his constituency is the poor.

With all these praiseworthy beliefs in his DNA, it’s no wonder that, as he puts it, the cardinals sought him out “from the end of the world,” meaning Argentina.

Also impressive is director Wenders’ use of his and Lisa Rinzler’s shoots in Assisi, black-and-white, deliberately faded and silent film, showing an actor playing St. Francis who at the key point in his life heard God tell him to restore a dilapidated church—which I believe he did thinking that God’s will is more important than his father’s rage at the saint’s alleged throwing away his money.

The film got added publicity five days before its May 18th opening when CBS’ Sixty Minutes showed excerpts.  Now if the movie crowd is anything like the 10,000 folks who line up every time he speaks, the box office should exceed that of “Black Panther.” After all, what other movie has a cast that includes Barack Obama, Donald J. Trump, Melania Trump, Simon Peres (hugging Abu Mazen, believe it or not), Vladimir Putin, Angela Merkel, John Kerry, John Boehner, Joe Biden, and  hundreds of extras in the U.S. Congress who give the pope standing ovations.