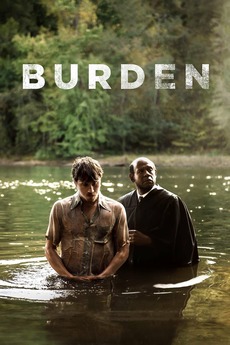 We learn from these lyrics from “South Pacific” that we are not born with hate. Hate is evoked by the environment, not the genes. The negative emotion may be given birth by your parents, later by your friends and what you see on TV and in the movies. This does not mean that we should not hate Hitler and Ted Bundy and Jeffrey Dahmer. That hatred is rational. To feel this animosity to an entire people because of their skin color or religion is irrational.

Andrew Heckler, who directs and wrote “Burden,” has been heretofore known mostly for his acting. However he contributes an incisive portrait of hatred based closely on a true story (we see some of the actual characters in the epilogue). In this case the focus is on the Ku Klux Klan which, surprisingly, was alive and well as recently as 1996, albeit in one small South Carolina town. Tom Griffin (Tom Wilkinson), the head of the sheeted warriors, had the brilliant idea to invigorate a dump of a one-screen cinema house by converting it into a museum of the Klan, with Confederate flags prominently displayed. One woman involved in the structure might be called a moderate in that she announces that Blacks are welcome as well as Whites because “Blacks also fought and died for the Confederacy.” A shrine to the KKK would seem bad enough but the place is used for headquarters of an actual Klan group, one of its members, Mike Burden (Garrett Hedlund), serving as grand dragon.

Not much is told about Burden’s youth aside from his statement that he once coaxed a deer to come right up to him fearlessly (the animal senses the boy’s friendliness) only to be shot by Burden’s father. Burden is poor, badly educated, orphaned, seeking a family as do so many young gang members, though he finds familial warmth from Tom Griffin, who assures him that he treats the young man as his own son. In fact he is so enamored of Mike that he hands over the deed to the Klan museum, giving title to him upon his death.

Two forces counteract the racist group. One is Judy (Andrea Riseborough), a single mom, who is instrumental in turning around the emotionally unstable Mike. The other is David Kennedy (Forest Whitaker), the local reverend, who active not only in his fire-and-brimstone sermons on Sunday but throughout the week gathering crowds of other Black people including a few Whites, demanding that the Klan museum be destroyed.

Much of the movie is taken up with the gentle and sometimes fiery relationship between Judy, who is actively anti-Klan, and Mike Burden, who treats her as lovingly as he treats the local Black people with contempt and with his fists. In one scene he targets the reverend for assassination with a high-powered rifle, but on further consideration he puts down the weapon (he “lays the burden down” as we hear from a song on the soundtrack) and reconsiders his fury at the African-Americans.

Many of the scenes come across as if the movie were endorsed by the church, given the loving attention that Reverend Kennedy gives to the repenting Klan member, affection that means a lot to Burden after he quits the Klan and is targeted for beatings at Tom Griffin’s order. The reverend’s “chasing hate with love” is not popular with his own family, which recalls the many beatings that the gang members gave to the African-Americans.

Garrett Hedlund’s terrific performance anchors the story, turning the individual into a thoroughly credible action to redeem himself. Many of the scenes, however, are not modulated, the physical actions and obscenity-laced words appearing one after the other. We in the audience are coaxed to consider whether we should treat our enemies with love, as “brothers in Christ” as the reverend notes, or to feel emboldened temporarily by taking vengeance against those who have wronged us.

Save the for cursing, you might almost take this film as a Hallmark Hall of Fame episode, one that could be appreciated by a wide audience as a supplement to a Sunday sermon.

“Sometimes a pastor needs a pastor,” notes Jeffers (Cedric the Entertainer) by way of advising Reverend Toller (Ethan Hawke). And boy, does he ever. While Jeffers heads a huge church, his sermons carried on a TV screen for a vast crowd, Toller is at the helm of a miniscule Dutch Reformed Church built during the mid-18th century. The church has a history, now celebrating its 250th anniversary–which is why Toller keeps his job though he attracts scarcely eight congregants. Toller has psychological and physical problems that lead him toward a reckoning that allows the film to pass from an austere, Ingmar Bergman-esque story to an out-and-out thriller like “Taxi Driver.” With a nod toward Andrei Tartovsky, whose films carry metaphysical tones and a wink toward Robert Bresson, whose minimalism includes a spare soundtrack and all-around minimalism, director Paul Schrader is unconventional enough to throw in some surprises, including one of the most resonant climaxes you’re likely to see this year.

Schrader, whose strict, Calvinist parents did not allow him to see films until he was eighteen, unwraps the story as though a reflection on his own upbringing, entertains a view that actors should not over-emote, that more naturalistic performances would evoke passion in the audience more than a display of firecracker exhibitionism. Think of his “Dying of the Light,” in which Nicolas Cage plays an ill CIA agent who goes rogue to hunt down a terrorist who had tortured him. At first you won’t see a similarity between that work and this one, but wait until you get to the explosive final fifteen minutes!

Schrader’s minimalism is evoked by the paucity of music in the soundtrack and the boxy 1.37:1 aspect ratio, rarely used today and dazzlingly effective in this one. Ethan Hawke, made up to look like the 46-year-old he actually was in the making of the picture, is a troubled man. He drinks, thinking, perhaps, that this is the only pleasure he should allow himself. He is in physical pain urinating, the toilet water turning blood red, but he puts off going to the doctor as though he wants to torture himself. And no wonder. His family has a military tradition. He encouraged his son to volunteer to fight in Iraq, which he considers a morally bankrupt war (duh). The young man’s death weighs heavily on him now, as does the abandonment by his wife shortly thereafter.

He is not the only character with a view of life as a miserable burden to bear. Michael (Philip Ettinger), a radical environmentalist whose wife Mary (Amanda Seyfried) is troubled that her husband wants her to abort her pregnancy. He delivers a strong monologue to Toller in which he foretells the end of the world, torn asunder not by warfare but by climate change and the global devastation it would bring about. Why bring a child into this world? His wife is not too happy to find a suicide vest, whose existence encourages Toller to search the ‘net for videos of Middle East suicide bombers. Mary is the only person capable of sweeping the cobwebs from Toller, though Esther (Victoria Hill), a parishioner who leads a choir (which sings in beautiful harmony), is resented for her “hovering” around Toller.

Ethan Hawke is most effective in conveying the conflict present in Toller’s own mind, a man who is so racked with guilt, loneliness, alienation and unnecessary austerity that we can believe only one woman can bring him out of his funk. In a different mode, Cedric the Entertainer uses tough love to break through to Toller, urging the pastor to do something in the real world and not to spend all his time in “the garden.” “Ever Jesus went out to the marketplace.”

If you are a fan of stories depicting inner struggles, enjoy wrestling with intellectual conundrums, and relish the work of a very busy Ethan Hawke (who has five movies scheduled in 2018 including a role in a TV series), this is your film. Unsurprisingly you will think of Trump, who gets no mention in the film but whose aversion to thinking of environmental catastrophe (and thinking at all), has a clear bearing here.