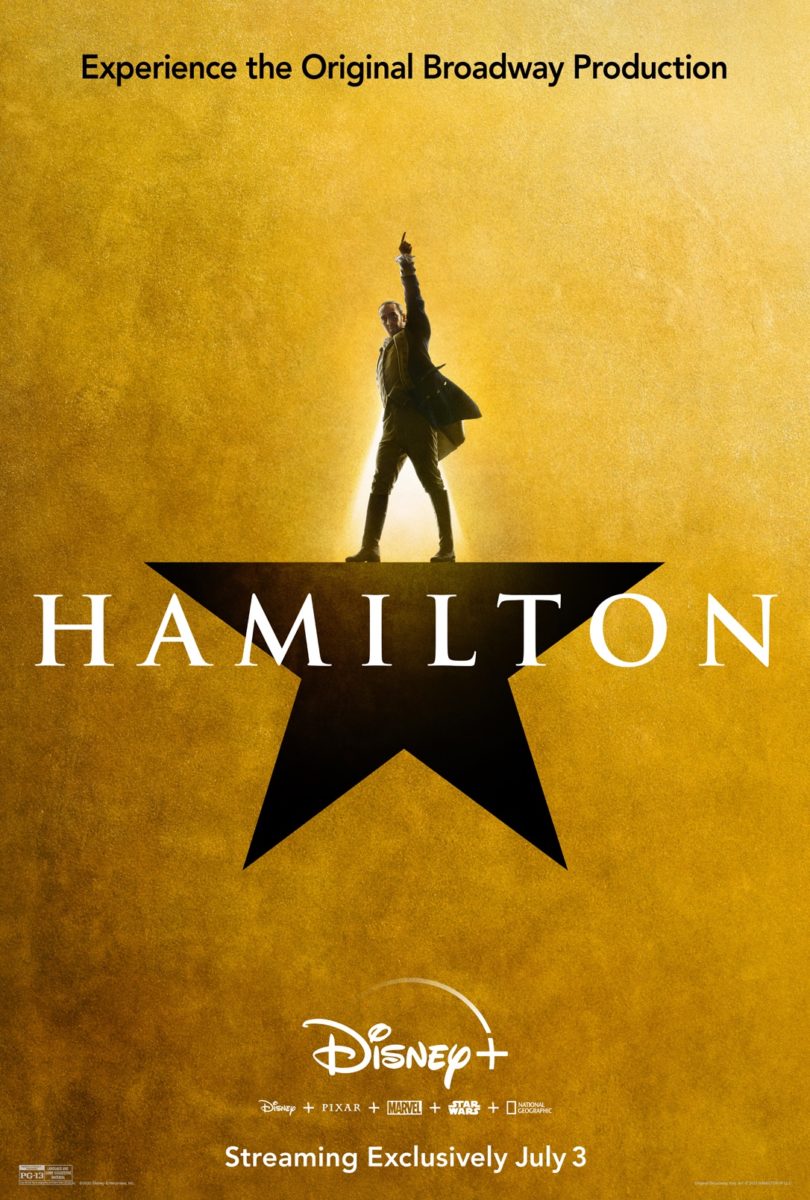 As one opponent of Alexander Hamilton states in the musical “Hamilton,” “He’s a threat as long as he holds a pen.” Would this insight be a dated one, or would it apply to the resident of the Oval Office today? History repeats itself. Every person in power has enemies, every ideology has its suggested modifications. After the American Revolution, opposition did not end but continues to this day. Everybody is unique and therefore everyone has a point of view.

Hamilton, first Secretary of the Treasury, had opposition early on in both the political and the personal all creatively evoked in Lin-Manuel Miranda’s blockbuster musical, which played to full houses in the Richard Rodgers Theater beginning August 6, 2015. Seats are filled by people who paid upward of $1,000 (to brokers) for tickets. Now, after almost five years since its opening, it hits the big screen, or rather, it opened on July 3, 2020 streaming only, for a while depriving the lush, glorious musical of venues where it would best be enjoyed.

There is an advantage to the film version, which is that we get to see the original cast with particular focus on an absolute genius, Lin-Manual Miranda, who composed the book, the music and the lyrics and plays the title character. He has a powerful singing voice, a presence that illuminates the room whether you’re watching from your computer or, perhaps later, in the multiplex. Though many movies deal with World War II, only a handful, like this one, are inspired by the American Revolution and the people in the colonies.

In our current year, the persecution of Black people seems finally to hit home even with people who think Obama’s election meant that racism was over. By contrast, what a representation of Blacks and Hispanics in “Hamilton,” a majority of the performers! The play was filmed in situ at the Richard Rodgers Theatre in 2016 with cameras that are not simply anchored to the floor but moving with the performers under Declan Quinn lenses, all under the direction of Thomas Kail in his big-screen freshman narrative movie. Dolly shots, closeups, and overhead filming adds to the wide scenes of bodies in motion, capturing the stillness of the intimate songs and the bouncing rhythms of jazz, rap and rhythm and blues.

Paul Tazewell’s costumes portray the Redcoats in their uniformed glory, while the colonists planning revolution don their colorful, but by contrast muted, colors. David Lorins’ scenic design emphasizing wooden scaffolds avoids the usual Broadway custom of being wheeled out and replaced depending on the action. Andy Blankenbuehler’s super-charged choreography evokes dancing that is anything but the sort popularized by the 18th century Puritans. Though some songs display moments of intimacy such as “Wait for it” sung by Aaron Burr (Leslie Odom Jr.), the general tone is bouncy and loud. The opening, Alexander Hamilton,” brings down the house in short order. Jasmine Cephas Jones captivates as both Peggy Schuyler and Maria Reynolds, though every scene involving King George (Jonathan Groff), who shows up on stage usually alone to warn the colonists not to come back crawling to him, is the musical’s comic highlight. Think of the insight Groff belts out “I will kill your friends and family to remind you of my love.” Know any current government officials who think that way, also without irony.

Theater fans who mourn that so many Broadway shows are retreads of the oldies; “South Pacific,” “Fiddler on the Roof,” “West Side Story,” “My Fair Lady,” “The Music Man,” will cheer that “Hamilton” is thoroughly original. There is nothing quite like it in Broadway’s history, with top audience seats prohibitively expensive. Now you can stream it with a Disney + accouint while you wait for the virus to calm down allowing it to make history at the multiplex.