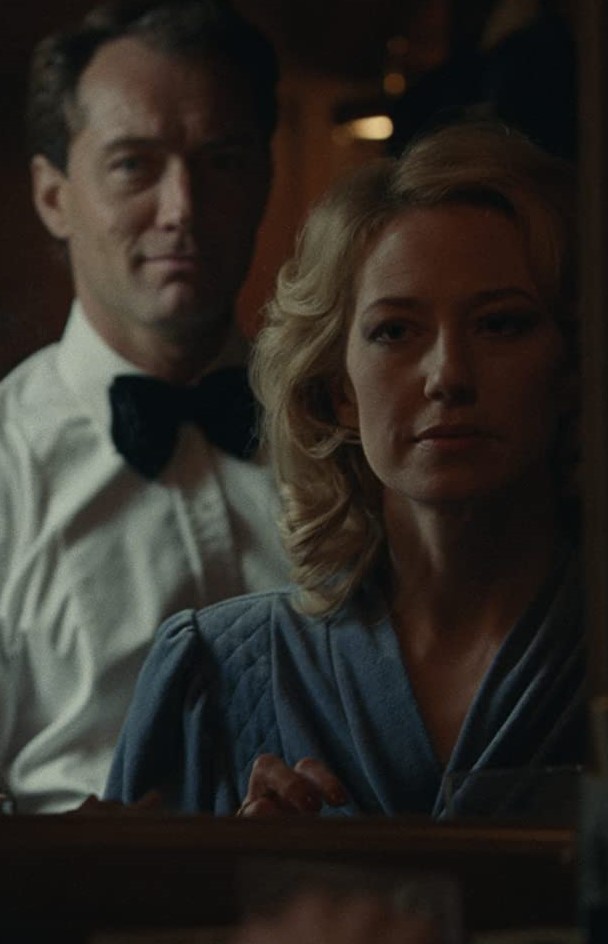 As Robert Burns noted, the best laid schemes of mice and men gang aft agley, which is a good thing if you’re a filmmaker because what can you write about if plans are always realized? Marriage supplies the best examples. Look at the 50% rate of divorce in America, the result of both declining novelty and huge expectations that go off the tracks. In his movie about a marriage that is not only deteriorating but features a woman whose own emotional balance goes off kilter, writer-director Sean Durkin is up his alley with his sophomore feature “The Nest.” His “Martha Marcy May Marlene” nine years back explores the life of a woman who had escaped from a cult, justifiably paranoid, trying to assimilate back with her natural family.

In his current film, Allison (Carrie Coon) is living comfortably in a New York suburb with her husband Rory O’Hara (Jude Law), her teen daughter Samantha (Oona Roche), and stepson Benjamin (Charlie Shotwell). Rory is a successful Wall Street trader; she gives horseback riding lessons at a nearby school. But Rory, dazzled by the American Dream, wants to become filthy rich not by continuing to have fantasies in America but by going to Britain where he must convince his old boss Arthur (Michael Culkin) to sell the firm to an American company.

Problems arise both at home and in the office. Allison complains that this would be their fourth move in ten years. The youngsters would have to make new friends and become adjusted to new schools. But in the 1980s when the story takes place, there may have been whiffs of feminism in the U.S. but there was nothing then like the current #MeToo movement, so Allison performs according to now-outdated gender roles. Even her mother (Wendy Crewson) advises that “a woman gets married so she doesn’t need to make decisions any more. Allison follows her man to England, where he has already paid a year’s rent on a 19th century Gothic house with farmland—so sure is he that his chickens will hatch notwithstanding the resistance he finds in his boss. Rory is British-born but his whose cultural ties to the mother country had lapsed after he had tasted success in a faster moving New York.

The movie is filled with shots of Allison riding her beloved horse Richmond around the large acreage while the principal riding done by her husband Rory is on the commuter train from their digs in Surrey to the London office. Puffed up with narcissism, Rory tries to pass himself off as a fellow with both money and class, bragging about the private schools the youngsters now attend (where Benjamin is bullied), passing himself off at fancy dinners with office staff as a person who attends theater and is impassioned by Anthony Hopkins. The brittleness of the marriage makes itself known when Rory is embarrassed by his disgusted wife, desperate because the family is down to its last 600 quid, announcing to the surprised restaurant table that her husband had never set foot in the theater and that he must have read his quote about Anthony Hopkins in that day’s newspaper.

A film that starts quietly albeit with music on the soundtrack that promises either horror or emotional surprises hits high melodramatic notes in the latter half, building up to a crescendo of family disfunction. A terrific performance by Jude Law is more than matched by that of Carrie Coon, as Allison cuts loose, no holds barred, furious that she went along with conservative gender roles. The death of her horse Richmond serves as apt metaphor for the inevitable demise of the O’Hara family.

In one scene Grace (Annette Bening) sighs that after a while, unhappiness ceases to be interesting. This may be true but “Hope Gap,” filled with unhappiness and meditative poetry, remains interesting throughout. Perhaps the major reason for this is the near-miraculous performance of the kind that Annette Bening gives. Or maybe because the film written by directed by Williams Nicholson in his sophomore contribution (his play “The Retreat from Moscow” compares the costly withdrawal of Napoleon’s forces from Moscow to the end of a three decades’ long marriage), pairs two thesps who work so well together that they convince of their inability to get along. The story is based on the marriage dissolution of the writer-director.

As you watch Grace and her long-term husband Edward (Bill Nighy) argue, you might be tempted to side with Edward, who has been worn down by his more outgoing wife’s insistence that he talk, even fight. In fact her nagging gives the appearance that she is a shrew who wants to make her man not what he really is, and in fact Edward states that she has been in love with her fantasy of a husband. Then again, you’d want to consider that she may have a good point. Women generally like to talk while men like to act, or so Esquire Magazine sometimes tells us, and Edward, who is a high-school teacher who discusses poetry as though he were declaiming to college majors in English literature, is clearly introspective.

Though Edward is actually in love with one Angela (Sally Rogers), the mother of one of the pupils, he has waited to tell Grace of his unhappiness and his wish to change gears somewhat past middle age. He wonders, as do we in the audience, whether he has been unhappy during the entire length of the marriage. He uses his own son Jamie (Josh O’Connor) as a sounding board, is advised by the twenty-something lad who lives alone and so far as we see has no girlfriend or love life, to keep the bond with his wife. When Edward tells Grace “I’m no good for you,” he uses the standard self-deprecation that both sexes have employed in efforts to mitigate their guilt.

Like Jamie, who is given a considerable role to show his personality when he is with two friends his own age, Jess (Aiysha Hart) and Gary (Nicholas Burns), Nicholson does not take sides, allowing us in the audience to spend the evening with our own friends discussing who is more at fault. Edward’s guilt aside, what is most fascinating is watching how Annette Bening, the only one in the cast who is not British, takes on the king’s English in registering a wide range of emotions, particularly the rage that is covering up the intense feeling of abandonment and lack of agency in negotiating with the person she has lived with for twenty-nine years. Yet she has only a vague inkling that they may have been a mismatch from the start.

There is an extra dose of disappointment to see that Seaford is a spot perfect for a romance of people during their mature years. Anna Valdez Hanks films on location in the south of England which looks over the English Channel from its white cliffs. Some may argue that we do not know enough about the couple, something that may give us insight into the one-sidedness of their split, but we see enough to fill in the backstory with our imagination.

The film will be appreciated by a prospective audience in middle age or beyond, though it’s a pity that dramas focusing on the mature are rarely attended by the callow. 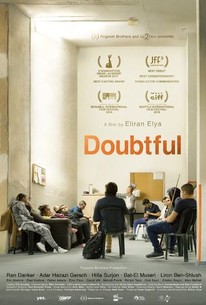 You might think that Israeli Jews have enough problems on their hands with Arabs inside Israel, in Gaza and in the West Bank; that they don’t have the time or the inclination to fight among themselves.  This is a doubtful premise.  There is probably not a nation in the world whose people live together in a Shangi La location, and that includes North Korea though we in the West have no idea how those folks get along with one another.  Now Eliran Elva, who wrote the script and directs “Doubtful,” uses the experience he has had with two shorts involving gunplay and the IDF, to give us his freshman full-length feature.  He gives us insight into the lives of people who are not the sort that you see in Israeli posters that show a solidarity of human beings unified by a common religion.  Instead his characters, eleven who are non-professional actors, play out a script about dysfunction in a small desert town in Beersheva.

The youths look like something out of “Blackboard Jungle” or “Precious,” with Ran Danker in the role of Sidney Poitier  and the ineffective Bill Sage respectively.  In this case Danker’s character, Assi, is himself an emotional wreck, sentenced to community service for drunk driving.  At one point he reminisces about his youth, about his failure to fit in, about being alone, playing alone, and now dealing with kids who are more scarred than he is.  His small class of students who in New York might fit into a special education class, are bored with everything except horsing around with each other, and who attend Assi’s new film-making class as a condition of their parole.

Assi will ultimately gain control and respect in the manner of many a movie about teachers perhaps in part because they recognize in him the similarities with themselves.  Though the theme is not a new one, “Doubtful” bears a look from an audience that might consider their own wild ideas and actions when they were younger, seeing at least some part of themselves in the teenagers here.  And the young people do quite a professional job acting out their anxieties and later filming an episode with a student director who yells “cut” with enthusiasm.  In fact Assi takes a special interest in Eden (Adar Hazazi Gersch) whose mother invites the teacher to her abode for some home cooked meals, leading Eden to hope that Assi is in love with her and could become his stepfather.

This is based on a true story, one with a sad ending that involves one character who executed an act far worse that whatever got him into trouble here.  Eliran Elya directs with an appropriately blunt style, encouraging the physicality and even the charm of these roughneck teens.  His script allows a three-dimensional look at the thirty-three year old Assi with some naturalistic scenes including the journey by bus and train from Tel Aviv to Beersheba.