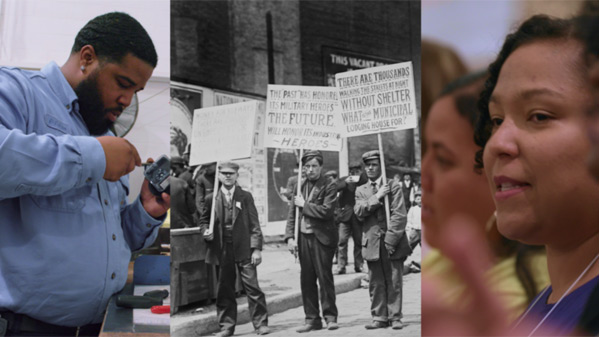 The opening question of this heartfelt documentary is a version of the most important political question you could ask yourself. Your answer would determine what you think would be the best society for both you and the rest of the U.S. This is the full version as I recall it from an article years ago: “Pretend you are about to be born. You have no idea whether you will be rich or poor, Black or White, live rural, suburban or big city, have a terrific set of parents or a pretty miserable duo, go to a great Ivy League school or drop out of high school, be mostly unemployed or on minimum wage, or be the CEO making millions annually. Now construct the kind of society you would favor. While this is a tough question for an unborn baby to answer, it is of course hypothetical.

It’s pretty obvious that you would not build an America in which one person, no, change that to five individuals, own as much as the bottom fifty percent of our residents. What’s that? Five people (can you name them?) have as much wealth as 165,000,000 folks combined. Let me guess. You would opt for socialism, wouldn’t you? Forget about the Soviet Union’s failed experiment with its brand of socialism, or China where millions of peasants starved, or Cambodia where everyone was forced to move out of the cities to work on farms for virtually nothing and if you wore glasses, you were as good as dead. We’re talking about American socialism, which, though not mentioned in the documentary, might be similar to Denmark’s.

Do you think you would want health care to be a right of all of our people? Do you favor a high minimum wage? Would you favor being in a union that has clout, and might you want to have union members on the board of the corporations for which you work? Should you be able to afford a home after laboring two thousand hours each year? Or would you build a society where CEOs of Google, Amazon and the like would make hundreds of millions each year—and remember that your chance of being such a captain of industry is less likely than your winning a lottery.

So: it turns out that you, as an unborn baby, would favor socialism. Is the society dreamed up here scary? Not to me, and yet most people who are not millennials for one reason or another think that socialism is un-American, dangerous in that it would lead to authoritarian governments where, as in the Soviet Union, you pretended to work and the government to pay you.

In this film directed by Yael Bridge in her freshman full-length picture (she made shorts like “The Habitat Game” exploring whether people are part of nature or apart from it), we get some archival films of socialists not just Karl Marx, which might be the first theoretician to come to mind, but also others like M.L. King Jr., Eugene Debs, Theodore Roosevelt, the writers of the Pledge of Allegiance and American the Beautiful, Professor Cornel West, and others teaching in prestige colleges. Academics are generally on the left politically if not socialists, and then again those who are socialists may not identify as such. We are introduced to an elementary school teacher, a single mother who cannot make ends meet even with two jobs. Would a socialist government treat the public schools the way our present leaders do, where even in the reasonably well paid New York City you can make about $125,000 a year BUT you must be willing to teach for twenty-five years before you can get what a student just out of law school might make immediately?

Among the industries cited is a co-op laundry in which the worker-owners feel a responsibility to contribute to the best of their ability because each is getting an equal share of the profits. What is not mentioned at all in the film is the concept of co-op housing, in which instead of a landlord’s cutting expenses to the extent possible with cheap paint jobs required every few years and poor responses to tenant grievances, all residents own shares in the co-op thereby having the motivation to keep the building in good shape, the profit motive gone.

Another subject the film should have mentioned is that under the American form of socialism that so many millennials favor, the government would not own the means of product, distribution and exchange, a system that doomed the Soviet Union, Venezuela and Cuba. Socialism means rule by society: that’s us. All of us, not just the society in Mar-a-Lago. And since we own the country, do you think we would tolerate bad air and water by corporations given the green light to pollute the air and water and contribute to climate change with its current effect on the fires in California and Colorado?

Actually America has been moving toward socialism steadily with a great many speed bumps along the way. We have gone from a country in which only rich white men were considered to have a stake, to the freeing of enslaved people, which involved the largest socialist revolution in our history. We have given the right to vote to women and to eighteen-year-olds. We introduced social security, Medicare, Prescription Drug programs, Affordable Health Care, all designed to prevent dire poverty form unemployment. Why not go further and ensure a job for every American? That’s what socialism could theoretically do.

In eighty-two minutes, “The Big Scare ‘S’ Word” is able to touch on examples only briefly, examining the work of some modern socialists like young Lee Carter, who is now serving his second term in the Virginia legislature, the only non-capitalist in the building. Is this because the people of Virginia, like those throughout the fifty states, simply think that socialism is a word that should be bleeped out? I think the makers of this film believe so, and I think that it would not hurt at all for the doc to get a wide audience. In fact, if all Americans saw this movie in January, Bernie Sanders might have swept the primaries and the election; who knows?

From the vast library of Icarus Films, a major distributor of DVD’s, comes “Capitalism.” The commentators are talking heads mostly in the field of Economics with some on related subjects like Anthropology. One thing must be made clear: This is not a Michael Moore treatment from the person I consider the foremost documentarian of satirical left-biased treatment in the entertaining “Capitalism: A Love Story” (an ironic title, of course, considering the filmmaker’s ideology). By contrast the episodes in Ilan Ziv’s film, which total 320 minutes, are more like the fare you expect in a college classroom, each unit’s becoming the subject of from a variety of academics in several languages according to each person’s home idiom.

It may be true that you will learn more from this series than from any course you might take at the university level, as then again, each unit is handled by experts—who may be more knowledgeable and even have a greater gift for language than your own professors.

If Economics is a popular major in college, it may be not so much that our young people are fascinated by the subject but rather that they perceive the study will enhance their lifetime earnings. This may or may not be true, but you will probably earn more than if you studied anthropology or theater.

For non-Economics people such as I, the episodes are on the whole as informative as they are dry (where is Michael Moore when we need him?) The DVD comes with a glossy booklet giving full descriptions of the storytellers, writers and director if you want to check that these are authentic and reliable voices. Ilan Ziv, who sits in the director’s chair, is Israeli-born, fought in the October 1973 war in his home country, and founded Icarus Films. After he left that auspicious company, he made oodles of documentary films mostly on human rights, such as “An Eye for an Eye,” which deals with crime in Texas.

“Capitalism” was broadcast on ARTE in October 2014, made up of six episodes, available on three separate DVDs. They are: Capitalism, Adam Smith, another on Adam Smith, Thomas Malthus, David Ricardo, Karl Marx, Keynes vs. Hayek and The Human Factor. Each episode delves deeply into the subject. For example, the initial one broadly entitled “Capitalism,” takes us before Adam Smith’s famous book “The Wealth of Nations,” indicating that during the Age of Exploration, slaves were treated as capital goods, bought and sold. The essay on Karl Marx takes us to the mid-19th Century, indicating that Marx published The Communist Manifesto too late. The revolutions in Europe were already going strong, meaning that his printed materials did not inspire the violence in the way that Harriet Beecher Stowe’s “Uncle Tom’s Cabin” was a forerunning of the U.S. War Between the States.

At least one pundit notes that 1991 marks the date that Communism ended in most of the world, but in 2008, Capitalism met its potential death throes. The series would be of great interest to Economics majors but is unlikely to find a happy home with folks who look for more entertainment with their scholarly leanings.